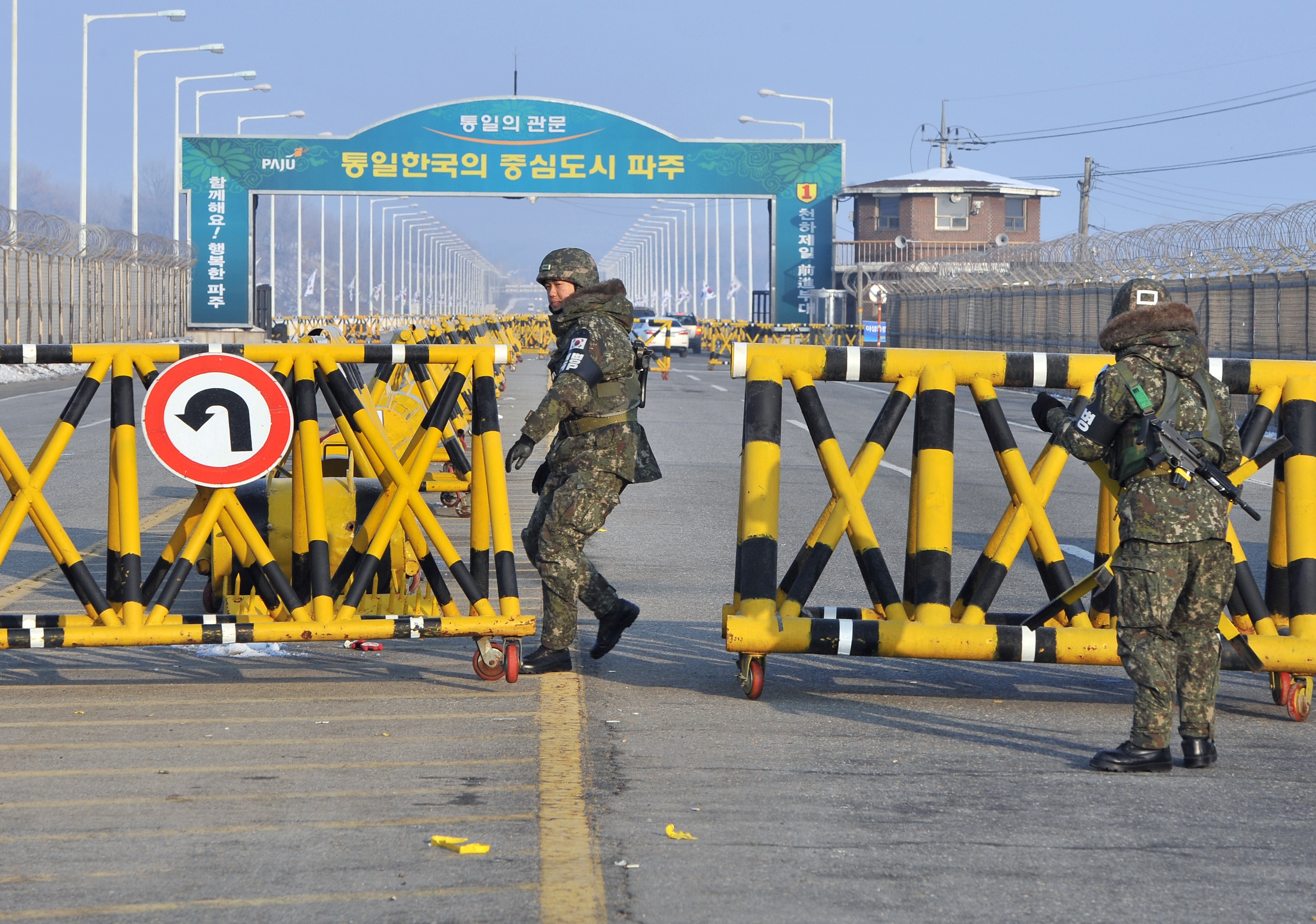 SEOUL, South Korea North Korea says it's cutting off a key military hotline with South Korea that allows cross border travel to a jointly run industrial complex in the North.

The move was announced in a statement sent Wednesday to South Korea from North Korea's chief delegate to inter-Korean military talks.

North Korea recently cut a Red Cross hotline between the Koreas, but there's still a hotline linking aviation authorities in both Koreas.

The hotline mentioned Wednesday is important because the Koreas use it to communicate as hundreds of workers travel back and forth to the Kaesong industrial complex. Officials say more than 750 South Korean workers were in Kaesong on Wednesday.

There was no immediate word about what cutting one of the few remaining official North-South links would mean for South Korean workers who were at the Kaesong industrial complex. When the link was last cut, in 2009, many South Koreans were stranded in the North.

North Korea is angry over routine U.S.-South Korean drills and recent U.N. sanctions punishing it for its Feb. 12 nuclear test. In a statement announcing the shutdown, the North repeated its claim that war may break out any moment.

South Korean officials said that the two Koreas had normal communications earlier in the day over the hotline when South Korean workers traveled back and forth to the factory park as scheduled.

Workers at Kaesong could also be contacted directly by phone from South Korea on Wednesday.

A South Korean worker for Pyxis, a company that produces jewelry cases at Kaesong, said in a phone interview that he was worried about a possible delay in production if cross-border travel is banned again.

"That would make it hard for us to bring in materials and ship out new products," said the worker, who wouldn't provide his name because of company rules.

The worker, who has been in Kaesong since Monday, said he wasn't scared.

"It's all right. I've worked and lived with tension here for eight years now. I'm used to it," he said.

North Korea recently cut a Red Cross hotline with South Korea and another with the U.S.-led U.N. command at the border between the Koreas. The Unification Ministry said only three telephone hotlines remain between the North and South, and those are used only for exchanging information about air traffic.

Kaesong is operated in North Korea with South Korean money and know-how and a mostly North Korean work force. It provides badly needed hard currency in North Korea, where many face food shortages.

North Korea last cut the Kaesong line in 2009, as a protest to that year's South Korean-U.S. military drills. North Korea refused several times to let South Korean workers commute to and from their jobs, leaving hundreds stranded in North Korea. The country restored the hotline and reopened the border crossing more than a week later, after the drills were over.

Shinwon Group, a South Korean apparel maker with a factory at Kaesong, said it would call its workers on Thursday morning to check on them. Shinwon's South Korean employees stay in Kaesong for two weeks before returning to Seoul. Workers at Kaesong talked by phone with the Seoul office Wednesday morning, but there was nothing unusual about the call, said spokesman Lee Eun-suk.

Lee said that the last time the phone line was cut off between Kaesong and Seoul, it was "inconvenient" but did not affect business.

North Korea's actions have been accompanied by threatening rhetoric, including a vow to launch a nuclear strike against the United States and a repeat of its nearly two-decade-old threat to reduce Seoul to a "sea of fire." Outside weapons analysts, however, have seen no proof that the country has mastered the technology needed to build a nuclear warhead small enough to mount on a missile.

In a sign of heightened anxiety, Seoul briefly bolstered its anti-infiltration defense posture after a South Korean border guard hurled a hand grenade and opened fire at a moving object several hours before sunrise Wednesday. South Korean troops later searched the area but found no signs of infiltration, and officials believe the guard may have seen a wild animal, according to Seoul's Defense Ministry.

Wednesday's development came a day after the North's military announced that that its artillery and rocket forces were at their highest-level combat posture.

Seoul's Defense Ministry said Tuesday it hadn't seen any suspicious North Korean military activity and that officials were analyzing the North's warning. Analysts said a direct North Korean attack on the U.S. was extremely unlikely, especially during the joint U.S.-South Korean military drills that end April 30, though there's some worry about a provocation after the training wraps up.

The rival Koreas have had several bloody naval skirmishes in disputed Yellow Sea waters since 1999. In November 2010, a North Korean artillery strike on a South Korean island killed two marines and two civilians.

"We're concerned about anything on the Korean peninsula, and anything in the North Korean arsenal, that could raise tensions and lead to provocations that go to a place none of us wants to go," Little said on Tuesday. "The full range of their arsenal is of concern to the United States and to our South Korean allies."