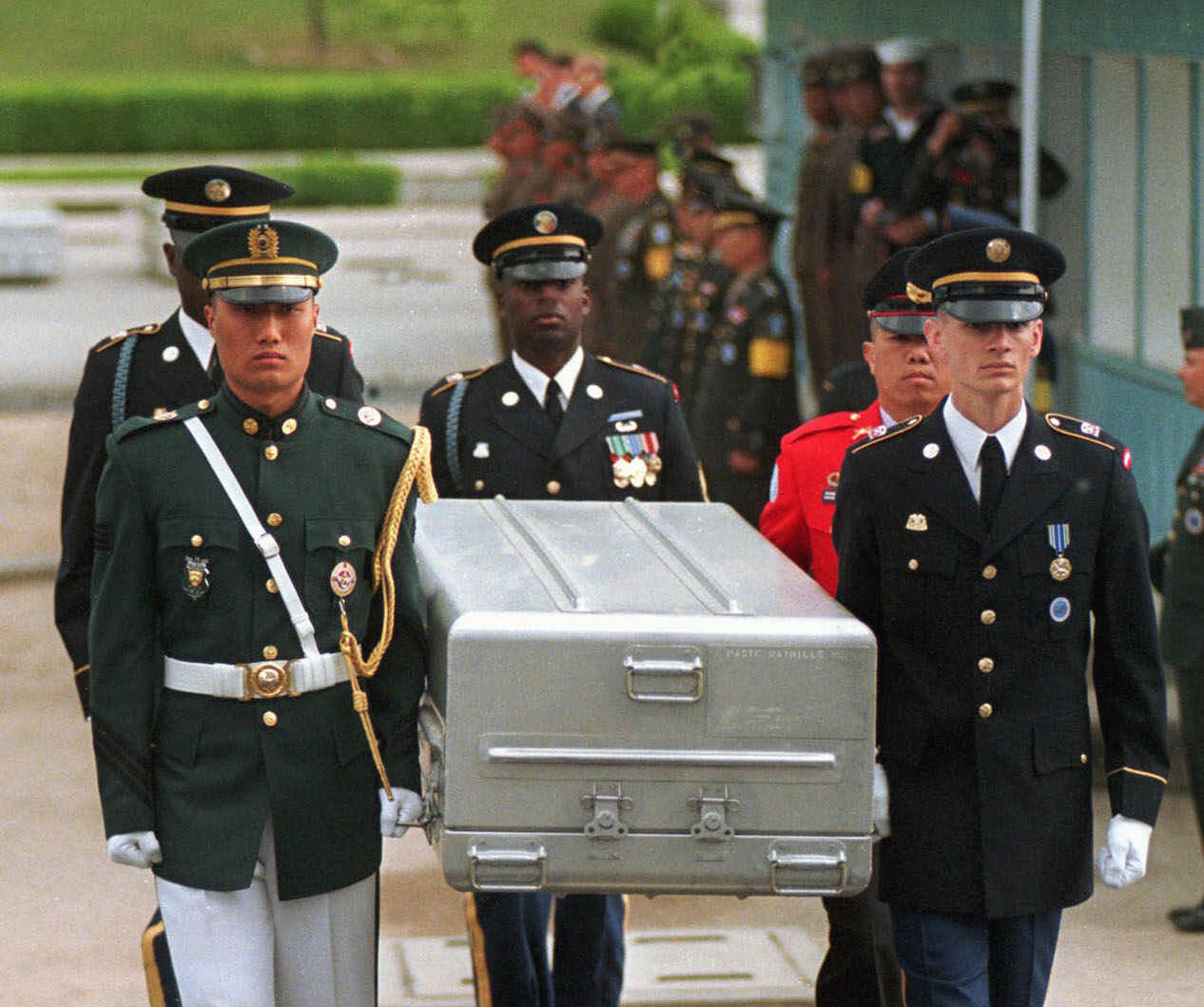 WASHINGTON -- The first transfer of presumed Korean War remains from North Korea to the U.S. is expected to take place on July 27, the anniversary of the signing of the armistice which ended the ground war. Under the current plan, officials tell CBS News senior national security correspondent David Martin that the remains would be picked up in Pyongyang, flown to Osan Air Base in South Korea and from there to Hawaii, where the Pentagon operates a forensics lab for identifying remains.

The number of remains is uncertain, with estimates ranging from 50 to more than 200, and their nationality is unknown but their bone structure indicates they are not Asians and therefore could be Americans or natives of other countries which fought in Korea under the U.N. command.

Mr. Trump admitted in an interview on July 14 with CBS Evening News anchor Jeff Glor that there were no guarantees the remains eventually handed over will turn out to be Americans.

"You know, remains are complicated," he said. "Some of the remains, they don't even know if they are remains."

That's a big step back from his false assertion June 20 in Duluth, Minnesota: "We got back our great fallen heroes, the remains sent back today, already 200 got sent back."

More than a month after North Korea pledged to immediately return some American war dead, the promise remains unfulfilled.

Secretary of State Mike Pompeo, who traveled to Pyongyang this month to press the North Koreans further, would only say on Wednesday that the return could begin "in the next couple of weeks." But it could take months or years to positively identify the bones as those of specific American servicemen.

In a joint statement at their Singapore summit, President Donald Trump and North Korean leader Kim Jong Un committed to recovering the remains of prisoners of war and those missing in action decades after the Korean War -- "including the immediate repatriation of those already identified."

That was more than a month ago, on June 12. Although Mr. Trump said eight days later that the repatriation had happened, it had not. It still has not. So, it was not "immediate," though the Stars and Stripes newspaper reported from South Korea on Tuesday that the North had agreed to transfer as many as 55 sets of remains next week.

"We're making progress along the border to get the return of remains, a very important issue for those families," Pompeo said Wednesday at the White House. "I think in the next couple of weeks we'll have the first remains returned, that's the commitment, so progress certainly being made there."

Likely also to prove untrue is the part of the Trump-Kim statement that said the North had war remains "already identified." It apparently has bones and perhaps associated personal effects, but history shows that any remains handed over by the North are likely to be difficult to identify. In recent days the State Department has changed that phrase to "already collected," suggesting it realized the remains have not been identified.

"There are no missing Americans who have been 'already identified' by the DPRK (North Korea) to be repatriated," says Paul Cole, who has researched POW-MIA issues from the Korean War for decades and served for four years as a scientific fellow at the Pentagon's Central Identification Laboratory in Hawaii. He said this element of the Singapore statement "reflects a near total ignorance of the role of science" in accounting for war dead.

Richard Downes, whose father, Air Force Lt. Hal Downes, is among the Korean War missing, says hopes may have been raised too quickly.

"Yes, the Singapore statement overpromised," he said, "exacerbated by our hope that it was accurate."

Hope has long sustained Downes and thousands of other Americans who seek closure after decades of uncertainty about a relative missing from the war. The Pentagon says 7,699 U.S. servicemen are missing from Korea, including about 5,300 believed to be in the North. Downes, 70, was 3½ when his father's B-26 Invader went down on Jan. 13, 1952, northeast of Pyongyang, the North Korean capital. His family was left to wonder about his fate. Downes is now executive director of the Coalition of Families of Korean and Cold War POW/MIAs, which advocates for remains recovery.

The Singapore statement may yet prove to be an important breakthrough. Bringing its promise to fruition, however, is proving harder than Mr. Trump made it seem.

As Mark Fitzpatrick of the International Institute for Strategic Studies put it in a web essay last week, "What was supposed to be the easiest item on the United States-North Korea negotiations agenda -- the return of Korean War soldiers' remains -- is proving to be yet another sticking point."

Beyond the promised initial return of remains that the North may have been holding in storage for years, the State Department said Sunday the two sides have agreed to restart searches for burial locations of U.S. war remains in North Korea. That effort was suspended by the U.S. in 2005. This raises another delicate issue to be negotiated: how much the U.S. would pay the North for this access. In the past it has paid millions, saying the money was "fair and reasonable compensation" for the North's help, not payment for bones or information.

In Fitzpatrick's view, the North has dangled the promise of war remains as bait to attain political objectives such as progress toward a peace treaty to replace the armistice agreement that ended the fighting on the Korean Peninsula in July 1953. The North sees this political objective as an essential element of ending what it calls Washington's hostile policy toward the North, which in turn is linked to its willingness to give up its nuclear weapons.

The Singapore summit was mainly about Mr. Trump's push to rid North Korea of its nuclear weapons. He said afterward there was no longer a nuclear threat from the North, though Kim agreed only to "work toward complete denuclearization of the Korean Peninsula," and no detailed plan has been worked out. On Tuesday, Mr. Trump seemed to reveal his own doubts about timing. He told reporters, "We have no rush for speed," adding, "We're just going through the process."