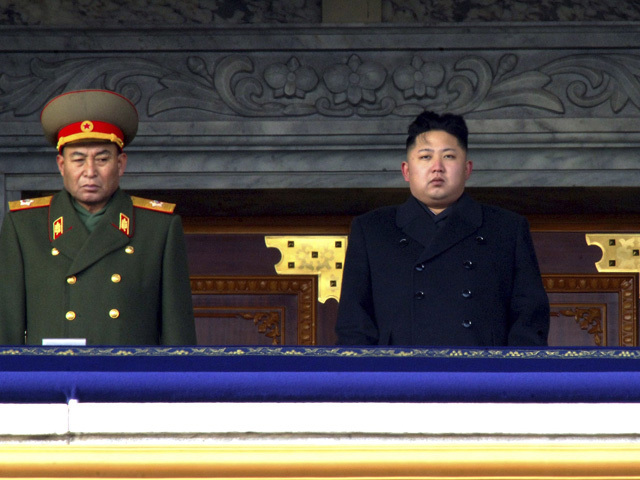 PYONGYANG, North Korea - North Korea has officially named Kim Jong Un as Supreme Commander, the country said Saturday, putting him formally at the head of the 1.2 million-strong military and further strengthening his authority in the wake of Kim Jong Il's death.

An unannounced Workers' Party meeting Friday proclaimed that Kim Jong Il's son and successor, who is in his late 20s, "assumed supreme commandership of the Korean People's Army" according to a will made by Kim Jong Il on Oct. 8, the North's official Korean Central News Agency said in a statement early Saturday morning.

The meeting of the North's ruling party came one day after the official mourning period for Kim Jong Il ended and senior military and political officials publicly declared Kim Jong Un leader of the party, military and people at a memorial for his father attended by hundreds of thousands.

Officials and state media have bestowed on Kim Jong Un a string of titles as North Korea's elite rally around him in the wake of his father's death on Dec. 17.

But the title Supreme Commander — and its formal approval by the powerful Political Bureau of the Central Committee of the Workers' Party — is a clear sign that Kim Jong Un is fast consolidating power over North Korea. It's also the latest step in a burgeoning personality cult around him.

Kim Jong Un should be "the only center of unity, cohesion and leadership" of the Workers' Party, North Korea's state media said, and the military should uphold the "songun," or military-first, politics laid down by Kim Jong Il.

Titles are an important part of North Korea's efforts to link Kim Jong Un to the myth-building surrounding the Kim family legacy.

Kim Il Sung, the country's first and only president, retains the title Eternal President even after his death.

Kim Jong Un was made a four-star general last year and appointed a vice chairman of the Central Military Commission of the Workers' Party. Since his father's death, he has wracked up major titles from officials and state media: Great Successor, Supreme Leader and Great Leader earlier Friday. And now he has officially been named Supreme Commander.

The North has made great efforts to show the world a unified face, but Kim Jong Un's age and inexperience have raised questions outside North Korea about his leadership of a nation engaged in delicate negotiations over its nuclear program and grappling with decades of economic hardship and chronic food shortages.

The North warned Friday that there would be no softening of its position toward South Korea's government.

North Korea's powerful National Defense Commission said the country would never deal with South Korean President Lee Myung-bak, a conservative who ended a no-strings-attached aid policy toward the North in 2008.

"We declare solemnly and confidently that the foolish politicians around the world, including the puppet group in South Korea, should not expect any change from us," the National Defense Commission said.

The commission said the "evil misdeeds" of the Lee administration reached a peak when it prevented South Koreans from visiting North Korea to pay respects to Kim Jong Il, except for two delegations led by a former first lady and a business leader, both of whose husbands had ties to North Korea.

North Korea had said foreign official delegations would not be allowed at the funeral but that it would welcome any South Koreans who wanted to travel to pay respects to Kim.

"Even though we lost Kim Jong Il, we have the dear respected Kim Jong Un," Kang Chol Bok, a 28-year-old officer of the Korean People's Internal Security Forces, told The Associated Press. "We will turn our profound sorrow into strength and courage."

Koh Yu-hwan, a North Korea expert at Seoul's Dongguk University, said the North is warning Seoul in the National Defense Commission statement not to take the new leadership lightly. He added that it's "too early to say the North is dashing hopes for reforms."

While blasting the South's leader, the North also offered a bit of hope for improved ties with the South, saying it "will continue to push hard toward the path of improved relations."

But it added that any better ties won't be "based on the deceitful ploys South Korea is employing by mixing 'toughness' and 'flexibility."' Seoul has signaled a change in its approach toward Pyongyang in recent months, saying it will be more flexible in dealing with the North.

South Korea's Unification Ministry said Seoul will maintain its North Korea policy and not react to every statement out of Pyongyang.

On Thursday, a somber Kim Jong Un was flanked by top party and military officials at his father's memorial, including Kim Jong Il's younger sister, Kim Kyong Hui, and her husband, Jang Song Thaek, who are expected to serve as mentors of their young nephew.

"The father's plan is being implemented," Ralph Cossa, president of Pacific Forum CSIS, a Hawaii-based think tank, said of the transfer of power. "All of these guys have a vested interest in the system and a vested interest in demonstrating stability. The last thing they want to do is create havoc."

Blinken postpones trip to China as balloon flies over U.S.
Thanks for reading CBS NEWS.
Create your free account or log in
for more features.
View CBS News In
CBS News App Open
Chrome Safari Continue
Be the first to know
Get browser notifications for breaking news, live events, and exclusive reporting.