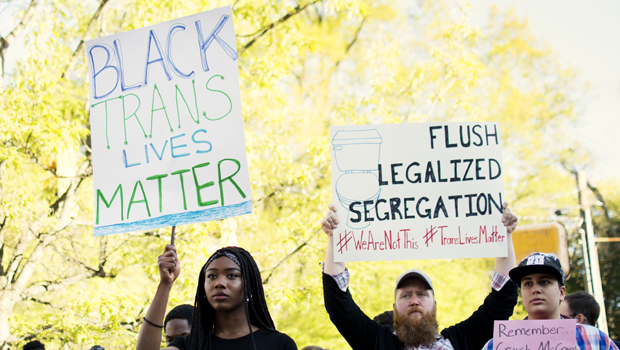 But he left intact a provision that requires transgender people to use public bathrooms corresponding to the sex listed on their birth certificate.

The state has been hit with a tremendous backlash over this.

Two weeks after he voted for the bill, Democratic state Rep. Billy Richardson says he's haunted by his decision, and he wants the law repealed.

"As Mark Twain says, 'It's never wrong to do the right thing,'" Richardson told CBS News. "I was wrong when I voted the way I did, and it was incumbent on me to stand up like a man and say I was wrong, and fix it."

The law has provoked a storm of criticism from gay, lesbian and transgender groups who say it discriminates against them -- while social conservatives have been as vocal in their support.

But it's had an immediate impact on the state's bottom line.

Businesses in the capital of Raleigh have already lost more than $700,000 from cancelled events. Another 16 groups are considering cancellations, worth about $24 million, according to the state's tourist board.

Deutsche Bank and PayPal have frozen their plans to create 650 new jobs.

As the fallout continues, Governor Pat McCrory tried to defuse the protests with his executive order.

"The people of North Carolina are entitled to both privacy and equality," McCrory said Tuesday in a YouTube video.

His order seeks to restore the right to sue for discrimination, but the state isn't challenging the most controversial measure of the law -- which restricts transgender bathroom access b.

For Rep. Richardson, his reversal was personal -- because of his his daughter's reaction.

"Honestly, after the vote, she called me and said, 'I'm disappointed,'" Richardson said. "It caused me to look in the mirror and reassess things."

A transgender woman CBS News spoke with said the law as it remains vilifies transgender people and repealing is the only acceptable option.