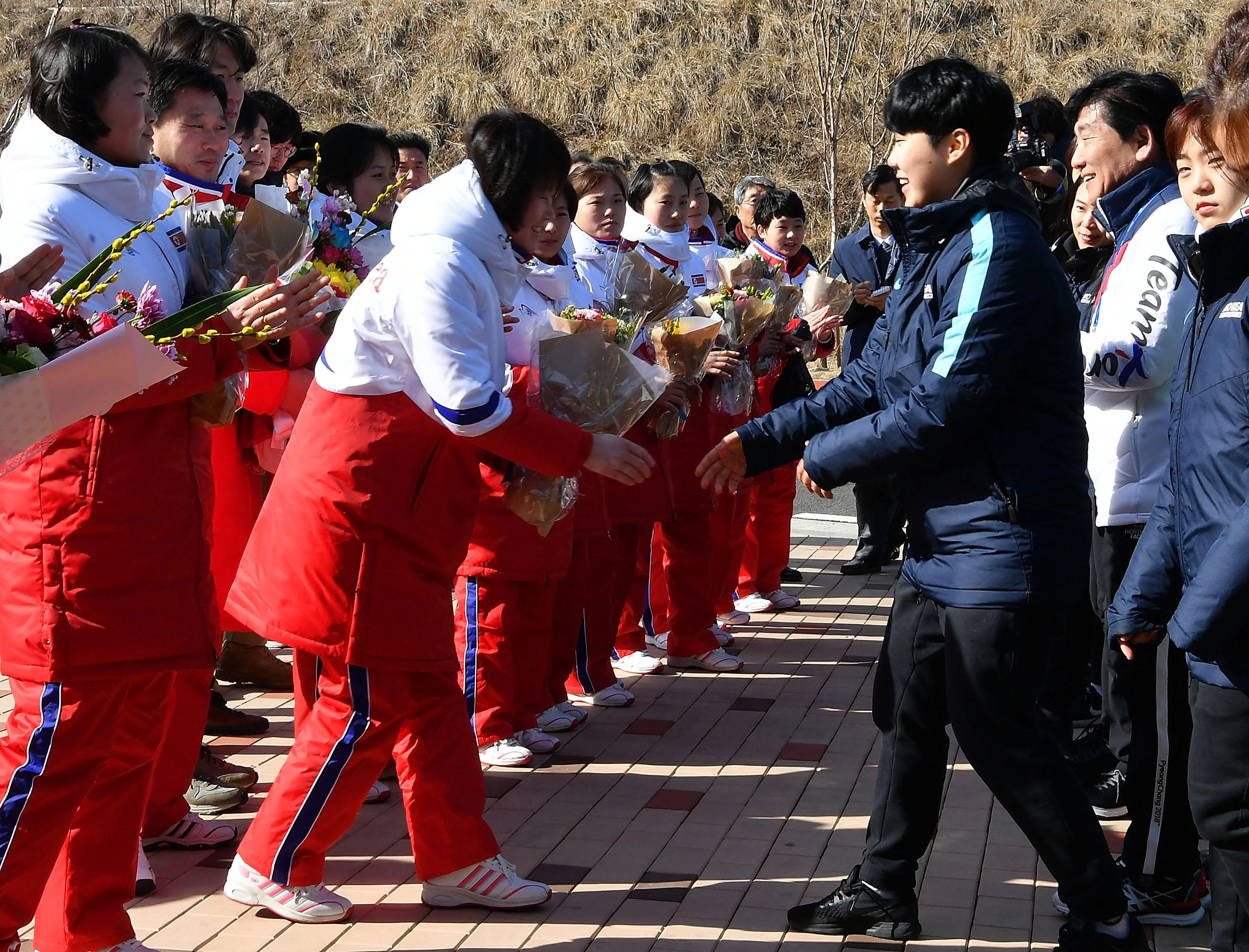 SEOUL, South Korea -- Female hockey players from the rival Koreas were paired up with each other Thursday to form their first-ever Olympic squad during next month's Pyeongchang Winter Games, as their countries press ahead with rare reconciliation steps following a period of nuclear tensions. A dozen North Korean hockey players wearing white-and-red winter parkas crossed the heavily fortified border into South Korea earlier Thursday, as about 30-40 conservative activists shouted anti-Pyongyang slogans at a nearby border area.

The North Koreans traveled on to a national athletes' village in southern South Korea, where they were welcomed by their South Korean teammates and Canadian coach Sarah Murray, who presented them flower bouquets in an outdoor welcoming ceremony.

"I sincerely welcome your arrival," Lee Jae-kun, head of the athletes' village, told the North Koreans after they got off a bus.

Pak Chol Ho, a North Korean coach who arrived with the 12 athletes and two support staff, told reporters that he's happy to team up with South Koreans. "I'm very pleased with the fact that North and South are united as one to participate in (the Olympics). I expect we'll see good results if we unite our efforts ... though we don't have much time," he said.

The Korean players later shouted "We are one!" and took a group photo. North and South Korean players plan to practice separately for several days as Murray needs time to learn about the North Koreans.

The players were sharing the same locker room and the lockers of the North Korean players were deliberately placed between those of their South Korean teammates so that they could become close quickly, according to Yonhap news agency.

The Koreas fielded a single team to major sports events only twice, both in 1991. One event was the world table tennis championships and the other soccer's World Youth Championship. But this is the first time they've assembled a single team for the Olympics.

The Koreas explored how to cooperate in the Olympics after the North's leader Kim Jong Un abruptly said in his New Year's address that he was willing to send an Olympic delegation. As part of the rapprochement deals, the Koreas also agreed for their athletes to march together under a single flag during the Feb. 9 opening ceremony. Some experts say North Korea may want to use improved ties with the South as a way to weaken U.S.-led international sanctions.

The International Olympic Committee has allowed 22 North Korean athletes, including the 12 hockey players, to compete in Pyeongchang in exceptional entries given to the North, which initially had none for the games. The 10 others will compete in figure skating, short track speed skating, Alpine skiing and cross-country skiing. They will come to South Korea on Feb. 1.

The joint hockey team deal has triggered a backlash in South Korea, with a survey showing about 70 percent of respondents opposing the idea because it would deprive South Korean players of playing time. The IOC-brokered agreement requires at least three North Korean players to suit up for each game, meaning that three from South Korea's original roster cannot play in those games.

Murray has said that the North Koreans' hard-hitting style would make them suited to be her fourth line, a group of players who are typically asked to provide strong physical play in short bursts while giving their teammates with greater scoring responsibilities a chance to rest.

Murray, who examined the North Koreans first hand during an event in Gangneung last year, has identified five players as memorable, but among them, only forwards Jong Su Hyon and Kim Hyang Mi made the trip for the Olympics.

The unified Korean team will open their group action against Switzerland on Feb. 10. It will then face Sweden on Feb. 12 and Japan on Feb. 14. What draws attention is its Japan match, as many in both Koreas still harbor bitter resentment against Japan's 35-year colonial rule that ended in 1945, three years before two different governments were formally established on the Korean Peninsula.

Conservatives in Seoul have held a series of small-scale rallies in recent days. On Monday, activists burned Kim's photo and a North Korean flag as the head of the North's popular girl band passed by them during a visit to the capital. North Korea responded Tuesday by warning similar actions could disrupt ongoing reconciliation efforts.

South Korean officials hope an Olympic-inspired mood of detente would serve as a stepping stone to the resumption of diplomatic talks that could slow down North Korea's nuclear advancement. North Korea, however, has insisted it won't discuss its nuclear program during its ongoing talks with South Korea, and some experts warn that tensions could flare again after the Olympics.