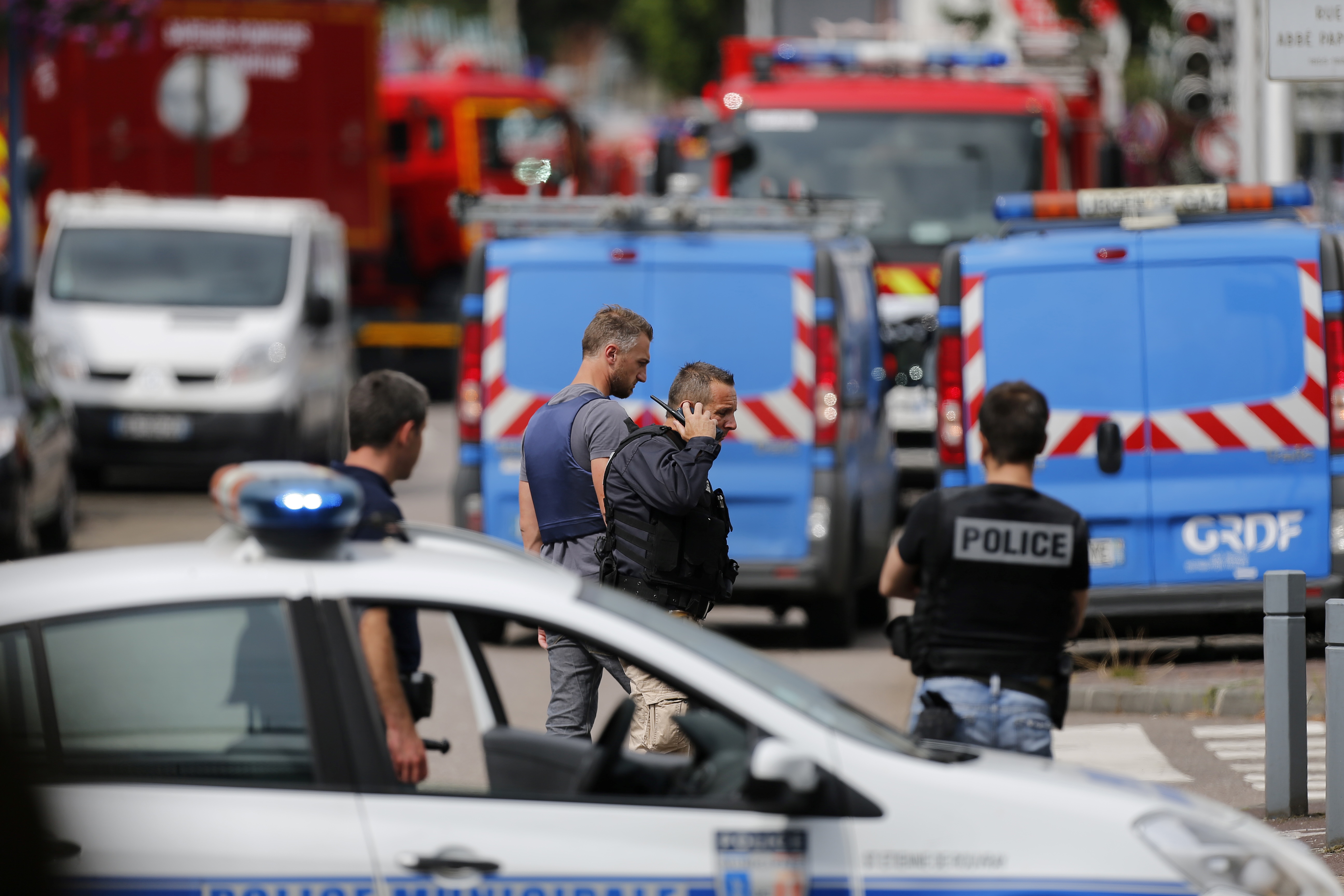 PARIS -- Two attackers seized hostages Tuesday in a church near the Normandy city of Rouen, killing a priest by slitting his throat before being shot and killed by police, French officials said.

Another person inside the church was seriously injured and was hovering between life and death, Interior Ministry spokesman Pierre-Henry Brandet said.

Police managed to rescue three others from church in the small northwestern town of Saint-Etienne-du-Rouvray, Brandet told reporters, and the two attackers were killed outside the building.

The Islamic State of Iraq and Syria (ISIS) group claimed the attack later on Tuesday via the group's affiliated Amaq News Agency.

French President Francois Hollande had earlier suggested that ISIS was behind the "vile terrorist attack," and said it was another sign of France's war with the extremist group.

"We must lead this war with all our means," Hollande said from Saint-Etienne-du-Rouvray, expressing support for Catholics but saying the attack targeted "all the French."

The priest who died has been identified as Rev. Jacque Hamel.

A nun who was in the church during Tuesday's attack said the 85-year-old priest was forced to the ground before his throat was slit.

"They forced him to his knees. He wanted to defend himself. And that's when the tragedy happened," said the nun, identified as Sister Danielle.

"They recorded themselves. They did a sort of sermon around the altar, in Arabic. It's a horror," she told BFM television.

Of her fallen colleague, she said: "He was a great priest."

The Paris prosecutor's office, which oversees investigations involving terrorism, said one person had been detained in relation to the attack, though no details were given regarding identity or location.

French prosecutors announced Tuesday that one of the church attackers evaded police twice using fake identities while trying to go to Syria.

One of the extremists who attacked a Normandy church has been identified by prosecutors as Adel Kermiche, a local youth whose parents flagged his radical behavior to authorities.

A family friend says Kermiche had a sister who is a doctor in the nearby city of Rouen, and a brother. Their mother is a professor. The family alerted authorities to his radicalism to try to stop him from going to Syria, Sacarabany said.

Kermiche was arrested trying to go to Syria and was put under judicial supervision upon his return, with an electronic bracelet that was deactivated for five hours a day allowing him to leave home without surveillance, according to a police official with knowledge of the investigation.

Kamiche was required to check in with police once a day, said the official, who spoke on condition of anonymity to divulge details.

In a statement, Vatican Spokesman Father Lombardi said, "the Pope has been informed and participates in the sorrow and horror of this absurd violence with a radical condemnation of every form of hate, and prayer for those affected."

"We are particularly struck because this horrible violence happened in a church, a sacred place in which the love of God is announced," he continued.

The town's mayor, Hubert Wulfranc, tearfully denounced the "barbarism. Let us together be the last to cry."

A somber quiet surrounded Saint-Etienne-du-Rouvray, a suburb of the medieval city of Rouen composed of genteel residential neighborhoods and working-class quarters with massive apartment blocks.

Hassan Tarchich, a former resident of Moroccan descent, returned Tuesday night to pay his respects, laying flowers and a candle outside the slain priest's home. "You don't kill in the name of God," he said. "He was a man of peace."

The hostage situation was the first known attack inside a French church in recent times. One was targeted last year, but the attack never was carried out. The anti-terrorism division of the Paris prosecutor's office immediately opened an investigation.

Dominique Lebrun, the archbishop of Rouen, confirmed the death of Hamel.

"I cry out to God, with all men of good will. And I invite all non-believers to unite with this cry," Lebrun wrote in a statement from Krakow, Poland, where Pope Francis was visiting. "The Catholic Church has no other arms besides prayer and fraternity between men."

Roberto Maroni, the president of the Lombard region in Italy, said in an appeal circulated on social media that "Father Jacques is a martyr of faith" and requested that the pope "immediately proclaim him St. Jacques."

Shortly after the appeal, the hashtage #santosubito, which translates as "saint immediately," began circulating on Twitter.

The canonization process is a lengthy one involving two miracles attributed to the person's intercession, but in the case of a martyr only one miracle is needed, after beatification.

There must first be a declaration by the Vatican that the person indeed died for the faith.

France is currently on high alert after an attack in Nice on Bastille Day - July 14 - that killed 84 people and a string of deadly attacks last year claimed by the Islamic State group that killed 147 others. France is also under a state of emergency and has extra police presence in the wake of the Nice attack in which a man barreled his truck down the city's famed Promenade des Anglais, mowing down holiday crowds.

ISIS extremists have urged followers to attack French churches and the group is believed to have planned at least one church attack earlier.

In April 2015, an Algerian student who was arrested after shooting himself in the leg was found with heavy weapons, bulletproof vests and documents linked to ISIS. He is charged with killing a young woman inside her car the same day. According to French authorities, the suspect, Sid Ahmed Ghlam, was sent by the Belgian Abdelhamid Abaaoud to attack a church in Villejuif, just outside of Paris.

A cell directed by Abaaoud later carried out the Nov. 13 attacks in Paris that left 130 people dead and the March 22 attacks in Brussels that killed 32 people.