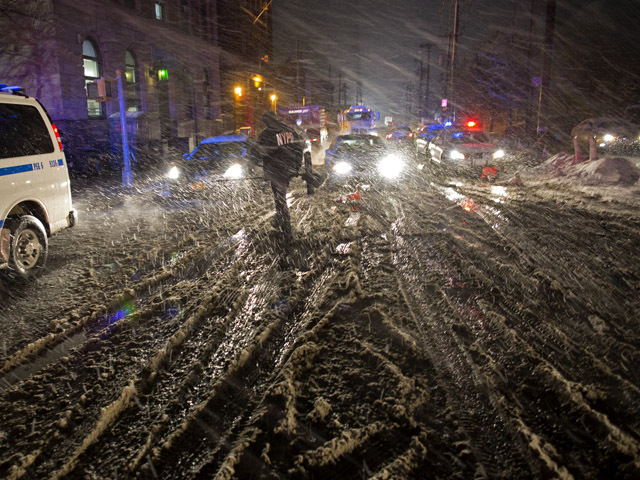 NEW YORK A nor'easter blustered into New York and Jersey on Wednesday, threatening to swamp homes all over again, plunge neighborhoods back into darkness and inflict more misery on tens of thousands of people still reeling from superstorm Sandy.

Under ordinary circumstances, a storm of this sort wouldn't be a big deal, but large swaths of the landscape are still an open wound, with many of Sandy's victims still mucking out their homes and cars.

CBS2 meteorologist Lonnie Quinn said that the snow will diminish by 1a.m., Thursday and be out of around 7 a.m.-9 a.m. later that morning. He forecasted that New York City may get 2 to 5 inches of snow, while Middlesex County, New Jersey, could receive between 4 to 8 inches of snow.

1010 WINS in New York reported of new power outages in parts of New Jersey, including East Rutherford, Hackensack, and Woodbridge attributed to the nor'easter. About 5,000 PSE&G customers experienced a loss of power from this latest storm.

Thousands of people in low-lying neighborhoods staggered by the superstorm just over a week ago were warned to clear out, with authorities saying rain, wet snow and 60 mph gusts in the evening could set back the cleanup, topple trees wrenched loose by Sandy, and erase some of the hard-won progress made in restoring electricity to millions of customers.

"I am waiting for the locusts and pestilence next," New Jersey Gov. Chris Christie said. "We may take a setback in the next 24 hours."

In New Jersey, public works crews worked to build up dunes along the shore to protect the battered shoreline, and new evacuations were ordered in a number of communities already emptied by Sandy. New shelters opened.

In New York, police went to low-lying neighborhoods with loudspeakers, encouraging residents to leave, but Mayor Michael Bloomberg didn't order new evacuations, and many people stayed behind, some because they feared looting, others because they figured whatever happens couldn't be any worse than what they had already gone through.

"We'll hunker down, five people in an apartment, and make it through the night," said Jordan Clark of Queens, CBS Station WCBS New York reported.

"This is nothing," Staten Island nurse Elena McDonnell said as she weathered the storm in a dark, flood-damaged home that she fled last week when cars on her block began floating away.

Still, authorities urged caution. The city manager in Long Beach, N.Y., urged the roughly 21,000 people who ignored previous mandatory evacuation orders in the badly damaged barrier-island city to get out.

Major airlines grounded numerous flights in and out of the New York area ahead of the storm, causing another round of disruptions to ripple across the country. United and American suspended operations in the region by afternoon, as white-out conditions developed. Other airlines have cancelled flights too. All are encouraging passengers to reschedule are allowing them to do it for free.

Airlines are quick to cancel flights ahead of major storms to avoid stranding aircraft and crews. Doing so also lessens storm-related financial losses. As of 4 p.m. Eastern, about 1,300 U.S. flights had been canceled on Wednesday, according to flight tracker FlightAware. About 40 percent of those are at Newark Liberty International Airport -- which was also the hardest hit with Superstorm Sandy last Monday. Most of those cancellations were made well before the first snowflake fell.

All construction in New York City was halted -- a precaution that needed no explanation after a construction crane collapsed last week in Sandy's high winds and dangled menacingly over the streets of Manhattan -- and parks were closed because of the danger of falling trees. Drivers were advised to stay off the road after 5 p.m.

By the afternoon, the storm was bringing rain and wet snow to New York, New Jersey and the Philadelphia area. Huge waves pounded the beaches in New Jersey. Firefighters in New York City responded to reports of tree branches falling into buildings, blocking streets and knocking down electrical wires.

"We're petrified," said James Alexander, a resident of the hard-hit Rockaways section of Queens. "It's like a sequel to a horror movie." Nevertheless, he said he was staying to watch over his house and his neighbors.

In Lindenhurst, a Long Island community that's still struggling in the wake of Sandy, very wet snow has been falling. A canal there was high on Wednesday afternoon amid the nor'easter predictions. But it was still a foot below street level -- far better than it was during last week's big storm.

On streets leading to the Great South Bay, a couple of signs warn: "Residents only. Looters will be shot."

On Staten Island, workers and residents on a washed-out block in Midland Beach continued to pull debris -- old lawn chairs, stuffed animals, a basketball hoop -- from their homes, even as the bad weather blew in.

Jane Murphy, a nurse, wondered, "How much worse can it get?" as she cleaned the inside of her flooded-out car.

Forecasters said the nor'easter would bring moderate coastal flooding, with storm surges of about 3 feet possible Wednesday into Thursday -- far less than the 8 to 14 feet Sandy hurled at the region. The storm's winds were expected to be well below Sandy's, which gusted to 90 mph.

Sandy killed more than 100 people in 10 states, with most of the victims in New York and New Jersey. Long lines persisted as gas stations but were shorter than they were days ago. Ahead of the nor'easter, an estimated 270,000 homes and businesses in New York state and around 370,000 in New Jersey were still without electricity.

The storm could bring repairs to a standstill because of federal safety regulations that prohibit linemen from working in bucket trucks when wind gusts reach 40 mph.

Authorities warned also that trees and limbs broken or weakened by Sandy could fall and that even where repairs have been made, the electrical system is highly fragile, with some substations fed by only a single power line instead of the usual several.

"We are expecting there will be outages created by the new storm, and it's possible people who have just been restored from Sandy will lose power again," said Mike Clendenin, a spokesman for Consolidated Edison, the main utility in New York City.