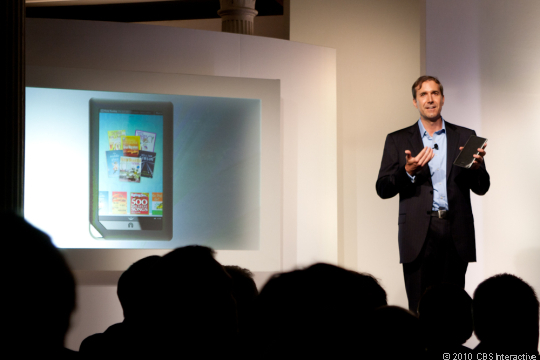 Barnes & Noble announced the launch of  the Nook Tablet, priced at $249 and a price drop on the Nook Simple Touch that brings the price of the e-reader down to $99. The Nook Tablet is a more powerful and faster successor to 2010's Nook Color, which remains on the market for $199 (a $50 price cut), reports CNET.

The newly-priced Simple Touch is available today, while the Nook Tablet is available for pre-order with an expected ship date of November 17. Amazon's Kindle Fire will be available November 15; its ad-supported Kindle Touch With Special Offers is due to ship November 21.

The Nook Tablet and Kindle Fire both have 7-inch color LCD screens, 1GHz dual-core Texas Instruments CPUs, run custom versions of Android, offer Wi-Fi connectivity to the Web and their respective e-book and app stores, run Adobe Flash, and claim about 8 hours of battery life (with wireless switched off), reports David Carnoy of CNET. Another similarity: like Amazon, Barnes & Noble is billing its Nook Tablet as a "media" device, with ample access to music, games, and video; Netflix and Hulu streaming video services will be preloaded when the device launches.

But despite the similarities, Barnes & Noble claims to have the edge. CEO William Lynch told CNET, "This is the best media tablet hands-down on the market. We've done some things to optimize performance that just aren't available on the Kindle Fire."

The Nook Tablet comes with 16GB of built-in storage (twice as much the Kindle Fire); it also has a microSD expansion slot (the Fire has none). The Nook boasts a "laminated, no air-gap" display that offers a 89 percent viewing angle, and it includes 1GB of RAM (twice as much as the Kindle Fire's 512MB), which helps with multitasking.

While the Nook Tablet looks a lot like the Nook Color, at 14.1 ounces it weighs less and has a lighter-colored finish. It also has an integrated microphone that allows you, for instance, to record your voice (or your child's voice) while reading interactive kids e-books.

Lynch said that despite the Nook Tablet's higher price it was a better value than the Kindle Fire.