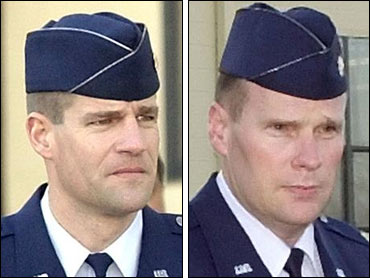 The pilots, Majors Harry Schmidt and William Umbach, had been charged with involuntary manslaughter, aggravated assault and dereliction of duty and faced up to 64 years in prison if convicted in a court-martial.

Carlson recommended that commanders should decide whether Schmidt, who released the 500-pound bomb from an F-16, should be punished for lesser criminal offenses, including failure to ensure that the troops he attacked were not allies and to obey when air controllers told him to "stand by" before he dropped the bomb.

A flying evaluation board also will determine whether Schmidt should be able to fly for the Air Force again. The maximum non-judicial punishment for him would be forfeiture of a month's pay, confinement to quarters for one month and restriction on travel for two months.

Schmidt has the option of refusing the punishment and insisting on a trial. His defense lawyer, Charles W. Gittins, said Wednesday Schmidt would not accept punishment because "he didn't do anything wrong." Gittins did not immediately return a call Thursday.

Umbach was issued a letter of reprimand. He has requested that he be allowed to retire, and the general recommended that it be granted.

"Most officers are glad that this has been dropped, and they feel this is the right thing to do," reports CBS News Consultant Mike Lyons, a retired Army major. "It sends a message … throughout the Air Force that they must pay attention to their targeting and to their technology and make sure they're absolutely sure before they engage a target."

The two members of the Illinois Air National Guard had been the first pilots to face homicide charges as a result of a friendly fire incident during combat.

Schmidt, 37, blamed the "fog of war" for the mistake, saying he believed he and Umbach, 44, were being ambushed by ground forces.

The pilots said they were never told the Canadians would be conducting live-ammunition exercises that night. Defense attorneys suggested Air Force-issued amphetamines, which were routine issued to help aviators stay awake during long missions, had clouded the pilots' judgment. They also blamed a military communications breakdown and said Air Force brass, not the pilots, should be punished.

A joint U.S.-Canadian investigation into the bombing concluded that the pilots were at fault for the Canadian soldiers' deaths, and the head of the probe said they showed "reckless disregard" for standing orders against attacking, ignored briefings about allied troop locations and should have simply flown out of the area.

But an Air Force judge who presided over a military hearing in January recommended all criminal charges be dropped and that the pilots instead face internal Air Force discipline. Carlson followed that recommendation.

The case had been closely watched in Canada, where many were outraged by the bombing and the two days it took President Bush to publicly apologize.

Canada's defense chief, Ray Henault, responded to the announcement Thursday, saying: "While risk is an inherent part of military operations, we will continue to work with our allies to mitigate the possibility of such a tragedy recurring."

He said Canada would remain committed to contributing to international peace and security.

The April 17, 2002, bombing near Kandahar killed Pvt. Richard Green, Cpl. Ainsworth Dyer, Pvt. Nathan Smith and Sgt. Marc Leger, and wounded eight other Canadians. They were the first Canadians to die in combat since the Korean War.

Claire Leger, whose son died when the powerful explosive detonated next to him, said of the Air Force decision: "I'm not surprised, but I am disappointed."

She said from her home near Ottawa that she wants both U.S. pilots to lose their authorization to fly.

Mary Anne Perry, whose son Cpl. Brett Perry was one of the injured soldiers, said she was disappointed that news reports of Carlson's decision had circulated before the Air Force notified the families of the victims.

Speaking from her home in Winnipeg, Perry said that while she didn't expect the pilots to be court-martialed, she was hoping for some kind of disciplinary action.

Schmidt and Umbach had been returning from a 10-hour patrol, at more than 15,000 feet, when they spotted surface-to-air fire. It turned out to be from Canadians with the 3rd Battalion of the Princess Patricia's Canadian Light Infantry, based near Edmonton.

The Canadians were firing rounds horizontally, not vertically in a way that would have threatened the two F-16s, according to investigators. The bomb was dropped despite a flight controller telling Schmidt to "hold fire."

Less than three minutes after the bomb hit, Schmidt said: "I hope that was the right thing to do," according to recordings of the mission.

"Me too," said Umbach, the mission's commander.

Schmidt had transferred to the National Guard in 2000 after a decorated career as a Navy pilot and an instructor at the Navy's "Top Gun" fighter pilot school. Umbach is a United Airlines pilot who had served in the Air Force.