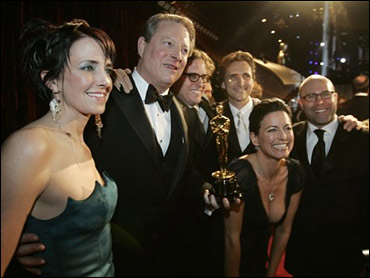 Former vice president Al Gore used the success of his documentary, "An Inconvenient Truth" to expand his efforts to educate people about global warming - and to tell a few jokes.

The film turned Gore's road show about climate change into a film that won Academy Awards for best documentary and best song.

Best Song, "I Need to Wake Up," was a win for Melissa Etheridge, who may have raised a few eyebrows as she planted an on-camera kiss on her partner Tammy Lynn Michaels, saying later: "I was kissing her because that's what you do, you kiss your loved one when you win an Oscar, that's what I grew up believing."

But Gore – the star of the film - was also the star of the story, onstage celebrating with the director and producers, after having spent a year on the road promoting the movie and its message.

"My fellow Americans, people all over the world: we need to solve the climate crisis," said Gore, addressing the large unseen audience of the Oscars as he picked up his award. "It's not a political issue, it's a moral issue. We have everything we need to get started with the possible will to act. That's a renewable resource. Let's renew it."

Earlier in the evening, before learning that his efforts had paid off with the Academy, Gore appeared onstage at the ceremonies with Leonardo DiCaprio, who has also been active in environmental causes.

They then announced that this was the greenest Academy Award ceremonies ever, with steps taken this year to save energy and preserve the environment.

"For the first time in the history of the Oscars, this show has officially gone green," said DiCaprio.

Oscar ballots were made from partially recycled paper and organic produce was served at the Governor's Ball. The academy joined with the Natural Resources Defense Council to reduce energy usage and increase recycling.

Other initiatives included rides for presenters and stars in hybrid vehicles. The academy said it had explored hydrogen-powered fuel cell buses to transport crew and other workers, but did not have enough time to do it this year.

Meals for the hundreds of crew and cast members were served on reusable plates and biodegradable dishware.

Food left over from the post Oscars Governor's Ball was to be donated to a local shelter.

Gore, who has been known to poke fun at himself from time to time, indulged in a joke as DiCaprio egged him on, suggesting that if Gore did happen to have an announcement he wanted to make to the world, this would be a good time.

Gore then whipped out a written statement.

"My fellow Americans, I'm going to take this opportunity right here and now, to formally announce my intentions to ..." Gore said before the orchestra broke in and he walked off, laughing, arm-in-arm with DiCaprio.

Backstage, Gore put speculation to rest, saying: "I do not have plans to become a candidate for office again."

Instead, Gore said, he is dedicating all his efforts to pressuring governments to act on climate crisis issues.

"It is the overriding world challenge of our time," Gore said.

"I really hope the decision by the academy to honor the work by director Davis Guggenheim and these producers will convince people who did not go see it before to see the movie and learn about the climate crisis and become a part of the solution."

"All of us were inspired by his fight for 30 years to tell this truth to all of us," Guggenheim said.