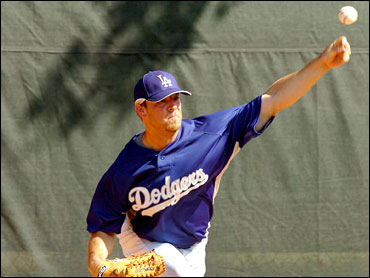 It has nothing to do with the Windsor, Mass., native's arm. He owns a rock quarry in Cummington, Mass.

White, who has appeared in seven big league games in nine professional seasons, paid $50,000 three years ago to buy 50 acres of land from an elderly aunt who needed the money to pay for a nursing home.

While clearing out a couple acres to build a home, he discovered stone ledges in the ground, prompting him to have the property surveyed.

A geologist estimated there were 24 million tons of the stone on his land. The stone is being sold for upward of $100 per ton, meaning there's well over $2 billion worth of material used for sidewalks, patios and the like.

Of course, that doesn't factor in the expenses involved in processing the stone and transporting it for sale.

World mourns Muhammad Ali, "The Greatest of All Time"

"It sounds bogus even saying those numbers," White said. "I'm just a small town guy trying to get to the big leagues. It's beyond comprehension."

The news has prompted some of White's teammates to refer to him as "The Billionaire," but the 29-year-old left-hander isn't counting his money just yet.

"There are a lot of questions," he said. "It takes time, it takes money, it takes machines. There are professionals who handle that stuff."

White's father has been involved in selling the stone, but it's presently a small-time operation.

"I guess you could say the property is for sale," White said with a chuckle. "We'll have to see how things turn out. I don't even know where to start. I'm in the process now of getting in touch with business-savvy guys, finding out how much to ask."

White said he doesn't feel like he's wealthy, which he isn't quite yet.

"Not at all. I don't live like a rich man," he said. "I'm a minor league guy who's played winter ball to make ends meet."

Dr. Peter Pannish, an adjunct professor in the department of geosciences at the University of Massachusetts, surveyed the property several months ago. He said he believes the stone was formed about 400 million years ago.

"It's basically a slabby rock that can be used for sidewalks, building faces and stone walls," Pannish said from his Amherst, Mass., office. "You can use it for a lot of other things, like flagstone on a patio. There are some sidewalks right here on campus that are made of that same rock."

Pannish said he believes White could sell his property for several million dollars, or more.

"As far as hundreds of millions, I doubt if that's possible because of all the expenses that would have to be considered," Pannish said. "But it could be quite a bit of money. He probably needs a mining engineer or an economic geologist to come up with a good evaluation."

White has received inquiries about making national television appearances, and has even been contacted about a possible movie. He is represented by Herbie Zucker of Zucker Sports Management in Chicago.

But for now, White is concentrating on his day job. And that's no surprise, considering pitching in the big leagues has been a lifelong dream.

"They say lefties bloom later than righties. I keep telling myself that," he said. "I'm here to make the big-league team. I feel confident about that, absolutely. I've had some pretty good years in Triple-A.

"I plan to play baseball until I can't play anymore. My goal is to play in the big leagues, regardless of what happens with the rock quarry."

White signed a minor league contract last December with the Dodgers — his eighth organization. He has appeared in 254 minor league games, 136 of them starts.

The Boston manager in 2003 was current Dodgers skipper Grady Little.

"The kid has a genuine love for the game," Little said. "He's quite a competitor, he's always striving to get better. It's not about money for him. He's prepared himself well coming into camp and he'll be going after somebody's job. He'll be given an opportunity.

With that, Little smiled and said: "Along the way, if anybody needs landscaping stone, we know where to find it."