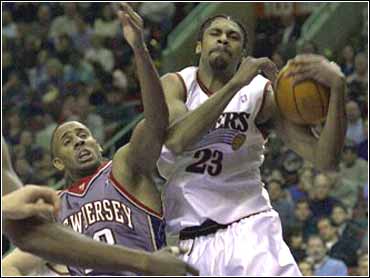 Without the services of Allen Iverson, the Philadelphia 76ers nedded a little extra something from somebody.

They got it from two players, Rodney Buford and Kevin Ollie, in a 97-86 victory over the New Jersey Nets on Friday night.

Ollie played 42 minutes and had nine assists, both career highs, to go along with a season-high 10 points. Buford scored a season-high 16 points, all in the first half before leaving with an ankle injury in the fourth quarter.

"A lot of guys contributed to a very good win," said Sixers coach Larry Brown. "I told you guys that Buford was going to be terrific. He just needs to play and he gets better every day. Ollie was tremendous."

Iverson sat out nursing a bruise of his left knee suffered in the team's win over the Chicago Bulls on Wednesday night.

Aaron McKie scored 21, Theo Ratliff had 17 and Toni Kukoc added 14 for Philadelphia, which extended its winning streak to five games.

"After the first half, I knew he'd be real aggressive," said Ollie, who played for the Nets earlier this season. "I faced him in practice, I know how tough he is to play."

After Marbury made a 3-pointer to cut the lead to 76-73 early in the fourth quarter, the Sixers rolled off 11 in a row to pull away with McKie scoring six during the spurt.

New Jersey made one final charge, pulling within five, but McKie then made a driving layup followed by a 15-foot jumper with 51 seconds left that gave Philadelphia a 93-84 lead.

"We played like we were supposed to play in the second half," Nets coach Byron Scott said. "But you can't win games against a team like this when you don't play until the third quarter."

The 76ers opened a big advantage in the first quarter, leading by 20 at one point. Philadelphia jumped out to a 21-4 lead as New Jersey shot just 2-of-15 from the field and turned the ball over five times.

Philadelphia continued to hold a comfortable lead in the second quarter and led 54-37 at the half.