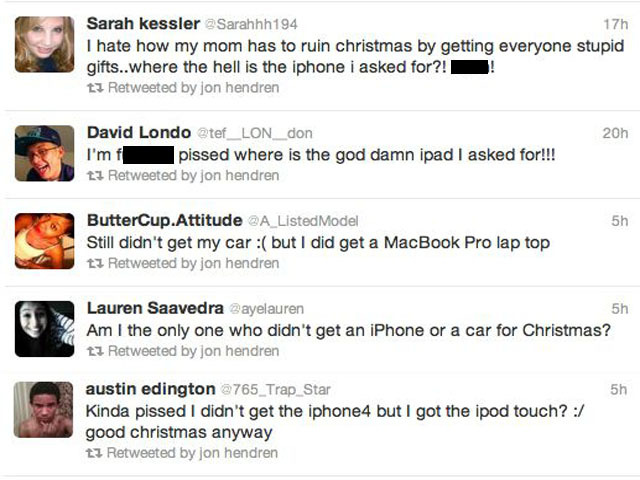 (CBS) - Shh. Do you hear that? It's the sound of kids cursing at their parents for not buying them an iPhone, iPad or car for Christmas.

Comedian Jon Hendren retweeted a series of bratty complaints after not receiving their desired presents. The results are a disappointing look into the state of this holiday season.

There were several "F-Us" to moms and dads for not springing for the luxury items. At a time when we're dealing with a struggling economy, the reactions are a little unbelievable.

"I'm f***ing pissed where is the god damn ipad I asked for!!!.[sic]" exclaimed @tef_LON_don. Perhaps it's with that missing question mark, grammar king.

"If I don't get an #iphone for christmas I'm gonna make my dads life a living helllllllllll," tweeted @ashiff. Mission accomplished?

Well, I certainly love iPhones and iPads, but Apple didn't carry me around for 9 months. Shaking my head at this first world problem.

There is a silver lining to this story, however, musician Jonathan Mann created a hilarious song called "WTF?! I Wanted an iPhone!!!" with Hendren's retweets. Instant classic.

OK, you've deleted Facebook, but is your data still out there?
View CBS News In
CBS News App Open
Chrome Safari Continue
Be the first to know
Get browser notifications for breaking news, live events, and exclusive reporting.