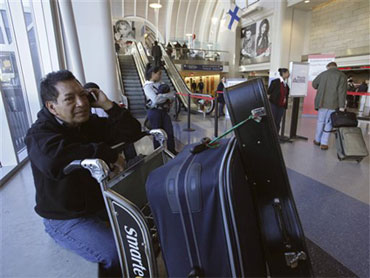 Thousands of passengers are stranded at airports across the country trying to get back to - or out of -- destinations on the East Coast that are still digging out from Sunday's monster storm. Many others are waiting things out in places other than airports.

With more than 1,000 flights cancelled already and days before air travel gets back to normal, what should passengers do to ensure they get where they were headed?

Options if Your Flight Hasn't Been Cancelled Yet

They depend not just on the weather where you are, but on the weather where your actual aircraft is located. So, you need to ascertain the actual aircraft number or tail number of the plane assigned for your flight, where it is, and whether it can take off. That is the single most important piece of information you need to determine if your flight has any chance of actually leaving. This is especially true if your flight is not leaving from an airport where your airline is based. If you're in Topeka, the only plane leaving is one that had to arrive first. If you're in Chicago and traveling on United Airlines, they could possibly substitute another aircraft, because they're based there.

If you're flightless right now, what's the best way to rebook? Do you go to the airport, hold on the phone, go online?

Never schlep to the airport without really good information, and you won't get that online. The last thing you do is go online. This situation calls for -- a conversation with a real human being!. Call the airline directly, and if you are put on endless hold, remember, we live in a world of airline alliances and code sharing. Chances are your flight is code-shared with another airline, such as United flights also carrying Continental Airlines flight numbers, US Airways flights carry United flight numbers (all as part of the Star Alliance), so call one of the partner carriers and you can get your information from them, as well.

Remember, the Internet only thinks in a linear way. It doesn't think creatively. A human being can make some other suggestions. For example, if you need to get from Los Angeles to Hawaii (even in good weather) and the plane isn't there, a creative reservations agent might have you fly L.A.-Phoenix-Honolulu, or L.A.-Las Vegas-Honolulu. It certainly starts in the wrong direction, but you need to go where the planes are, and bizarre routings like this are what's going to get you where you want to go. And that will be happening a lot this week.

Are airlines charging to rebook flights?

Every major airline has waived cancellation or rebooking fees through the 29th or 30th. They are also offering full refunds for those who now can't take their trips.

If it looks like your airline is seriously grounded, do you have any other options?

It's really more if your airport is grounded -- think alternate airports, such as Providence, R.I. instead of Boston, Islip (Long Island) instead of LaGuardia. However, the real problem is that airplanes are out of sequence, and so are flight crews. This will take between 36 hours and three days to get back on track, and since airlines will honor existing reservations, if you were cancelled in the last two days, you might be able to get out on Friday.

Are there other things you can ask for from your airline?

Not really. This is not a mechanical problem. It is weather-related, and the airlines are not mandated to get you a hotel or pay for your meals.

Is there anything you can do to make the wait more bearable?

Pack your own snacks before leaving for the airport. Keep in mind that not all airports offer free wireless service. So, if you have a wireless card, this is the time to bring it, so at least you can go online and do e-mail.