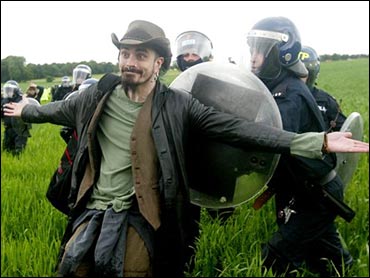 Explosions in London - on the subway and on double-decker buses, leaving some dead and many others injured - overshadowed the Group of Eight summit in Scotland Thursday, suddenly pulling the meeting's host, British Prime Minister Tony Blair, away from his diplomatic duties.

Earlier in the day in Gleneagles, Scotland, a discouraged Blair appeared with President Bush, acknowledging that the two leaders were unable to narrow their differences over how to tackle global warming at a summit thrown off stride by violent explosions in London.

"There is no point in going back over the Kyoto debate," said Blair, standing by President Bush following a breakfast meeting between the two.

Blair had sought to do just that at this year's Group of Eight nations economic summit. As summit host, Blair wanted the United States, along with the other countries, to set specific targets for reduction of carbon dioxide and other greenhouse gases that many scientists believe are responsible for global warming.

The United States is the only G-8 country that has refused to ratify the Kyoto agreement which set forth targets for reducing greenhouse gases. The international treaty took effect in February.

"Now is the time to get beyond the Kyoto protocol and develop a strategy forward," President Bush told reporters.

This year's summit of the G-8 countries - the United States, Britain, Canada, France, Germany, Italy, Japan and Russia - was being held at an exclusive 850-acre golf resort under the kind of heavy security that has been the norm at these gatherings since the Sept. 11, 2001 terrorist attacks in the United States.

Hoping to avoid a repeat of protest violence that broke out Wednesday, police - many in riot gear - placed a "safety cordon" around a camp several miles from Gleneagles that houses some 5,000 activists. Police blocked the main entrance to the camp and urged protesters to stay inside.

In their joint appearance, Bush and Blair sought to play down differences and emphasize areas of mutual agreement.

President Bush praised Blair for inviting China, India and other emerging economies to the summit and its discussions of climate change. The president says the Kyoto treaty, aside from being bad for the U.S. economy, is seriously flawed because it does not include developing nations.

Well aware of the impasse with the United States over global warming, Blair has tried to shift the debate toward increasing support for emissions controls in China, the world's second-leading emitter of greenhouse gases after the United States.

President Bush said he will stick to what he has previously supported - a reduction in U.S. emissions by roughly 18 percent.

"The goal of the United States is to neutralize and then reduce greenhouse gases," he said. "We are now developing the better way forward."

Faryar Shirzad, a top Bush foreign policy aide, told reporters on Air Force One that final touches were being made on a G-8 declaration that that would unanimously emphasize "common ground" on climate control without detailing remaining differences. The document will state that human activity is a cause of greenhouse gases and subsequent climate change, Italian negotiator Cesare Ragaglini told reporters.

Blair, appearing resigned to failure on achieving specific emissions targets, said he hoped to get back on a path to consensus by the time Kyoto expires in 2012.

"Everybody has got their positions on the existing Kyoto and that is not going to change," he said.

President Bush brushed off a question on China's proposal to acquire U.S. oil giant Unocal, saying there was already a process in the government to review the takeover of American companies by foreign interests on the grounds of national security.

"There is a process in the United States that our government uses," said Mr. Bush.

Blair made global warming and a massive increase of poverty relief for Africa the centerpiece issues of the 31st annual gathering of top world leaders.

Mr. Bush said the United States intended to provide help to impoverished countries nations by pushing for the elimination of the export subsidies that rich countries provide to their farmers but which depress the farm exports of poor nations.

The best way for the United States and European Union countries to rid themselves of agricultural subsidies is through the current Doha round of global trade negotiations, Bush said. A key ministerial meeting is scheduled for this December in Hong Kong.

The summit began Wednesday with a formal dinner hosted by Britain's Queen Elizabeth. Bush attended even though he suffered scrapes on his hands and arms after colliding with a local Scottish police officer while biking on rain-soaked roads around the 850-acre estate. The officer was treated for a minor ankle injury at a local hospital.

The issue of support for Africa occupied the summit's first day with Blair getting help in his lobbying effort from Irish rock star Bono and Bob Geldof, the organizer of the Live 8 concerts this past weekend. The concerts were aimed at raising public awareness of Africa's plight in hopes of giving a boost to Blair's ambitious goals.

Blair wants agreement to double aid for Africa to $50 billion by 2010 and for the G-8 nations to further commit to a target of providing foreign aid equal to 0.7 percent of their economy.

Bono said there was no agreement yet on the $50 billion target but he held out hope that worldwide pressure would produce better offers by the time the summit concludes on Friday.

President Bush announced last week that he will seek to double Africa aid to more than $8.6 billion by 2010, but private aid groups say this included some money already pledged and would fall short by about $6 billion of the amount needed as America's share to get to the $50 billion total. President Bush has also rejected setting a 0.7 percent target for aid.