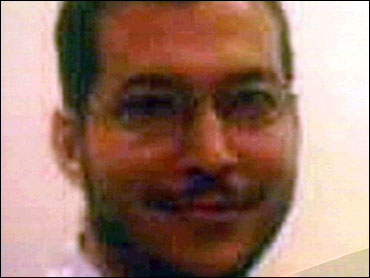 Authorities arrested an Egyptian chemist who studied in the United States and investigated a possible al Qaeda connection in Pakistan as the search widened for those behind London's suicide bombings, officials said Friday.

Magdy Mahmoud Mustafa el-Nashar, 33, who was arrested in Cairo, denied any role in the attacks, the Egyptian Interior Ministry said in a statement. He was taken into custody after the July 7 transit bombings and was being questioned, it said.

No charges have been filed against him. London police said a man has been arrested in Cairo, but they would not confirm his name or characterize him as a suspect in the attacks that killed at least 54 people, including four bombers.

Also Friday, police in Leeds raided a shop selling Islamic books and DVDs just blocks from where at least two of the four suicide bombers lived, and they seized materials.

Palmer (video)
reports el-Nashar rented the apartment used as the bomb-making lab and may have been the technical brains of the operation.

An earlier search of a flat in Leeds rented by el-Nashar found evidence of explosives similar to those used in the failed 2001 shoe-bombing plot involving Richard Reid, according to The Times of London.

U.S., British and Egyptian officials had been in contact concerning el-Nashar following the blasts, according to an Egyptian government official who spoke on condition of anonymity because he was providing information not in the ministry's statement.

El-Nashar was vacationing in Egypt and had intended to go back to Britain to continue his studies, the ministry said, without specifying the date he was taken into custody.

"El-Nashar denied having any relation with the latest events in London. He pointed out that all his belongings remained in his apartment in Britain," it said.

British and FBI officials had been looking for el-Nashar, who recently taught chemistry at Leeds University, north of London.

Leeds University said el-Nashar arrived in October 2000 to do biochemical research sponsored by the National Research Center in Cairo, Egypt. It said he earned a doctorate May 6.

Detectives who searched el-Nashar's flat found signs that quantities of a compound called TATP, or triacetone triperoxide, had been converted into a powerful explosive, the Times of London reported.

In 2001, Reid used an improvised shoe bomb rigged with TATP, which is difficult for bomb-sniffing dogs to detect, when he tried to board an American Airlines flight from Paris to Miami and blow it up over the Atlantic. Reid was subdued by passengers when he tried to detonate the explosive. He pleaded guilty to U.S. charges and is serving a life sentence.

TATP is a highly unstable explosive made from commercially available chemicals.

Terrorists "like it because its ingredients are easy to obtain and difficult to detect," explosives expert Hans Michels tells Palmer.

A spokeswoman for London's Metropolitan Police refused to comment on the report or say what type of explosive was used in the attacks.

But he added that making such a highly volatile explosive stable enough to carry out closely synchronized attacks would have required advanced knowledge of chemistry. Police say the three subway blasts happened within a minute.

The New York Times and the British Broadcasting Corp. also reported that TATP was found in a search of a Leeds home.

Earlier, Metropolitan Police Commissioner Sir Ian Blair said investigators were hunting the organizers of the London transit attacks — perpetrated by what he called "foot soldiers" — and confirmed police were focusing on a Pakistan connection.

Three of the bombers who carried out last week's terror strikes were Britons of Pakistani descent. Pakistani intelligence officials said Friday that local authorities are looking into a connection between one of the three and two al Qaeda-linked militant groups in that country.

Blair told the BBC that police believed they would discover an al Qaeda connection to the blasts.

"What we expect to find at some stage is that there is a clear al Qaeda link, a clear al Qaeda approach, because the four men who are dead, who we believe are the bombers, are in the category of foot soldiers," Blair said.

Authorities in Pakistan, meanwhile, were looking into a connection between one of the London suicide bombers and two al Qaeda-linked militant groups in Pakistan, including a man arrested for a 2002 attack on a church near the U.S. Embassy, two senior intelligence officials said.

The investigation is focusing on at least one trip that 22-year-old Shahzad Tanweer made to Pakistan in the past year, said the officials, who work at two separate intelligence agencies and are involved in the investigation. They spoke to The Associated Press on condition of anonymity because of the secretive nature of their jobs.

One of the officials said that while in Pakistan, Tanweer is believed to have visited a radical religious school run by the banned Sunni Muslim militant group Lashkar-e-Tayyaba.

The sprawling school in Muridke, 20 miles north of Lahore, has a reputation for hostility. Journalists who have traveled to the school in the past have been threatened and prevented from entering.

Lashkar-e-Tayyaba was banned by Pakistan for alleged links to a 2001 attack on India's Parliament.

ABC News, citing unidentified officials, reported that the attacks were connected to an al Qaeda plot planned two years ago in Lahore. Names on a computer that authorities seized last year from Muhammad Naeem Noor Khan, an alleged Pakistani computer expert for al Qaeda, matched a suspected cell of young Britons of Pakistani origin, most of whom lived near Luton, where the alleged suicide bombers met on their way to London shortly before last week's blasts, according to the report.

Authorities have now discovered ties between Mohammed Sidique Khan — one of the July 7 bombers — and members of that cell who were arrested last year, ABC said.

In another international development in the inquiry, Jamaica's government said it was investigating a Jamaican-born Briton as one of the bombers. Reports identified him as Lindsey Germaine.

On Thursday, police released closed-circuit TV video showing one of the four suicide bombers — 18-year-old Hasib Hussain — wearing a backpack as he passed through the Luton train station on his way to London.

Hussain allegedly set off the bomb that killed 14 people aboard the bus. That blast occurred nearly an hour after three London Underground trains blew up, and investigators don't yet know what Hussain did during that hour or when he boarded the bus.

Trying to map out Hussain's movements, police appealed for information from anyone who may have seen him in or around King's Cross station, where the four parted ways.

Police officially identified two of the suicide bombers Thursday — Hussain and Tanweer, whom they say attacked a subway train between Liverpool Street and Aldgate stations.

Hussain's family issued a statement Friday, saying they were devastated by the attack and had no idea he could have been involved.

"We had no knowledge of his activities," his family said, adding that had they known, they would have stopped him. "We urge anyone with information about these events, or leading up to them, to cooperate fully with the authorities."

It was Hussain's mother who gave investigators a key break in the case when she called them the night of the bombings to report him missing. Her description of Hussain's missing clothes led police to conclude that he was the likely attacker in the bus bombing that killed 14 people.