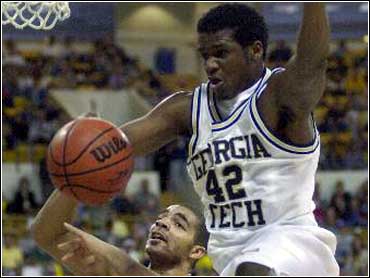 No. 3 Duke returned to its roots Saturday.

The Blue Devils put the emphasis back on defense after their first Atlantic Coast Conference loss since 1998, and the result was an 84-65 rout of turnover-plagued Georgia Tech.

Duke (19-3, 10-1 ACC) set a record with 31 consecutive regular-season victories in the ACC before falling at home to Maryland in a 98-87 shootout Wednesday night.

"I was not so much disappointed that we lost to Maryland," coach Mike Krzyzewski said. "I was more concerned that we did not play good defense."

That certainly wasn't the case against Georgia Tech (11-12, 3-7), which was harassed into 21 turnovers. The Blue Devils turned those miscues into a staggering 38 points.

"When you win so many in a row, you start relaxing," said Chris Carrawell, one of six Duke players who scored in double figures. "That's what happened against Maryland. We never thought we would lose to them at home. When they beat us, it was definitely gut-check time for us. To come out and play hard today was key for us."

Meanwhile, Carlos Boozer and Mike Christensen did a good job shadowing Tech's twin towers. Jason Collier scored 14 points but hit only 3-of-7 from the field, while Alvin Jones was nearly invisible during a four-point, seven-rebound performance.

"They were relentless on defense," said embattled Yellow Jackets coach Bobby Cremins, who might be in the waning days of his 19-year tenure. "We could ot run our offense, and we could not get the ball inside. They really came after us."

The Blue Devils, cruising toward their fourth straight league championship, were never seriously threatened by Georgia Tech, which seems likely to miss the NCAA tournament for the sixth time in seven years.

Duke raced to a 25-10 lead just over eight minutes into the game and maintained a double-digit margin the rest of the way. The Blue Devils committed only seven turnovers.

Tech threw the ball all over the court, including turnovers on three straight possessions during one particularly sloppy sequence in the first half. Each time, Duke came downcourt and scored.

"We're going through some tough times," Jones said. "This was one I thought we needed to be where I'd like us to be. Now, it's tough. I don't think we can lose again if we want to be in the tournament."

Carrawell and Nate James led Duke with 15 points apiece, while Williams added 13, Boozer 12 and flu-ridden Shane Battier 10. Freshman Mike Dunleavy Jr. also scored 10, including a spinning, twisting shot in the lane that gave the Blue Devils a 45-31 lead at halftime.

In the second half, Tech never got closer 48-35 and trailed by as many as 27 points.

"That was an amazing move by Dunleavy," Krzyzewski said. "We had a lot of momentum at the end of the half."

Georgia Tech was coming off its largest ACC victory in more than four years, a 68-47 rout of Virginia on the same night Duke was losing to Maryland. The Jackets used a zone defense to limit the Cavaliers to 27.6 percent shooting, but the Blue Devils had too many weapons. They shot nearly 50 percent (29-of-60), busting the zone with eight 3-pointers.

Duke extended its record road winning streak in the ACC to 17 games, and also defeated Georgia Tech for the eighth time in a row. The Yellow Jackets haven't won in the series since the 1996 season, losing by an average of 19.5 points since then.