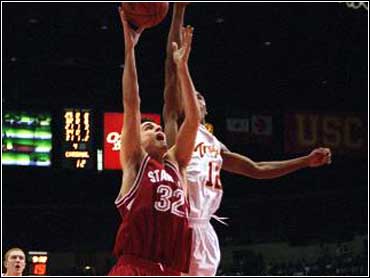 Stanford did it on defense Saturday night.

Reserve Ryan Mendez scored eight of his career-high 24 points in a two-minute span in the first half, and the second-ranked Cardinal put the clamps on Southern California in beating the Trojans 67-57.

"It's the toughest defense in the entire nation," said USC's Brian Scalabrine, a junior who had 20 points and six rebounds in a losing cause. "Defense wins games, and defense is probably going to win a national championship for them. This was the most physical game I've ever played in."

Only four teams have shot over 40 percent against Stanford this season, and none over 50. Opponents have made less than 34 percent of their shots this season.

"It's a lot of pride there," Stanford's David Moseley said of his team's defense. "You like shutting somebody down."

Then, looking at the box score, Moseley said, "Granville, 2-for-12. Michael shut him down, ding-ding."

Granville was one of several Trojans to have a difficult time.

"That's something that's been stressed at Stanford as long as I've been here," said Mark Madsen, who guarded Scalabrine. "The guys have bought into the program, that defense wins games."

"I'll take it. You have to take advantage of your minutes when you're out there," said Mendez, who played 26 minutes and made 6-of-8 shots, including 4-of-5 from 3-point range, and all eight of his foul shots.

"The wings were open in this game," Mendez said. "They gambled a little bit. We always had three or four feet to work with. One through 13, this team can hurt you. It's really hard to key on anyone."

Moseley had 13 points and nine rebounds and freshman Casey Jacobsen also scored 13 points for Stanford all in the second half.

Jeff Trepagnier added 16 points, three steals and three blocked shots for the Trojans (13-8, 6-3), who lost for the third time in four games after a seven-game winning streak.

"We wanted their big people to beat us inside, but their outside people were the key factors in the game," USC coach Henry Bibby said. "We held them to 67 points and that's not bad. We need four or five guys playing very good basketball for us to win."

Stanford has won seven straight games by an average of 19 points since losing to No. 9 Arizona 68-65 on Jan. 8, and is 26-4 in road games during the last three seasons.

"This was two teams playing hard on defense," Stanford coach Mike Montgomery said. "Had we not boarded well with our 13 turnovers (in the first half), we would have been in trouble.

"Defensively, we did gut it out. We were out-toughed a little in the first half, so we talked about not giving in to their pressure and we did a better job in the second half."

Trepagnier scored five points to spark a 7-2 USC run early in the second half, cutting Stanford's lead to four points.

Stanford scored the next seven points to lead 41-30, and the Trojans weren't closer than eight thereafter. USC scored the game's last five points.

Stanford endured a five-minute scoring drought early in the game but, thanks to defense, trailed by just four points when it ended.

The Trojans extended the lead to 15-9 on Nate Hair's 3-pointer 10:40 before halftime. USC went cold at that stage, failing to score for 6 1/2 minutes and going without a field goal for nine minutes.

After Mendez made two 3-pointers and two free throws, Madsen scored two straight baskets and Moseley added a 3-pointer for a 24-15 lead.

Scalabrine ended the USC drought with two foul shots with 4:09 left before halftime, triggering an 8-4 run that cut Stanford's lead to 28-23 at halftime.