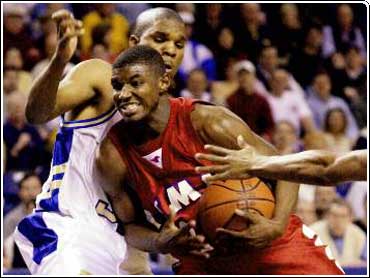 The only thing Tulsacoach Bill Self recognized about his 17th-ranked team Thursday night was the victory.

The Golden Hurricane saw most of a 20-point lead disappear before pulling away again for a 70-59 win over Southern Methodist(16-5, 4-3).

Tulsa (21-2, 6-1 Western Athletic Conference), normally cool under pressure, appeared so on edge that Self found little to praise except the final score.

"We had some good moments but we just didn't play very smart," Self said. "All we did right tonight was we tried real hard, but we didn't show much poise."

Eric Coley scored 14 points for the Golden Hurricane, who forced 23 turnovers 15 on steals and blocked eight shots while holding the Mustangs (16-5, 4-3) to 24 percent shooting, including 1-of-18 from 3-point range.

"We were lucky tonight because they missed their shots," Self said. "Other than a win, I didn't see much good come out of this."

Tulsa lost sixth-man David Shelton to fouls with 6 1/2 minutes to go, Coley fouled out with 3:18 remaining and center Brandon Kurtz, who had 10 points, did the same a minute later.

"I think for the most part, any win is a good win," Coley said. "It got ugly out there, but we know we can play better."

Tony Heard added 11 points and four steals for the Golden Hurricane, while Marcus Hill had 10 points.

Jeryl Sasser had 15 points for the Mustangs, who finished with a 58-42 rebound advantage, while Willie Davis added 13 points and had four steals.

Both Sasser anDavis fouled out in the final minutes and SMU's rally fizzled.

"I admired their defense in the first half," SMU coach Mike Dement said of Tulsa. "They really bodied us well. They certainly have great scorers and have lots of guys that play. Their young guys are contributing. I'm proud of our guys for battling back."

Coley's 3-pointer with 7 1/2 minutes left in the first half made him only the second player in Tulsa history to register 1,000 career points, 500 rebounds and 200 steals.