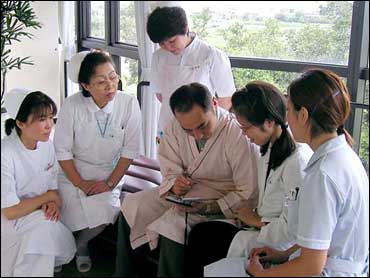 Like many retirees, Isamu Shishido sometimes forgets names and even his own telephone number. But now the 67-year-old says he's found a product that could sharpen his thinking: a new brain-training game from Nintendo Co.

The ailing maker of Super Mario and Pokemon games has scored a hit by courting Japan's burgeoning gray market with "Brain Training for Adults" — a number and puzzles game that Nintendo says can stimulate the brain.

"I don't want to end up some crazy old man," Shishido explained at a crowded Tokyo electronics store after trying the game on display. "I want to play a little everyday before going to bed."

The game, played on the company's handheld DS console, is part of an effort by Nintendo to broaden its customer base amid falling profits.

Other recent DS software hits let players study English, raise a virtual puppy, or converse with animals in an imaginary village — all departures from traditional games that cater to young males with a focus on sports, shootings and fistfights.

Brain Training puts players on a daily regimen of number games, word puzzles and reading exercises designed. It also lets players test their intelligence levels through IQ-type quizzes. It saves the results so progress can be tracked or compared with others.

The game has sold 3.34 million copies since its May 2005 launch. That has helped fuel the popularity of the dual-screen DS console, which has sold more than 6 million units in Japan since its December 2004 release.

That's more than Sony Corp.'s sleeker PlayStation Portable, which also went on sale in December 2004 and has sold 4.2 million units in Japan and the rest of Asia. Sony rushed out its own version of brain-training software in October but has yet to release sales figures.

Customers like Shishido, a food company retiree, will have to wait to buy a DS console, however: A new slimmed-down version was launched last week and promptly sold out, forcing eager buyers to scour Japan's electronics shops in hopes of finding one in stock. The next large shipment is not expected until later this month.

"We're not surprised. People who never even liked computer games are now getting hooked," said Ken Toyoda, a Nintendo spokesman.

To cater to older consumers, the Nintendo DS is user-friendly. There is no complicated set of controls — just a pen and touch pad — and players can turn the console sideways to make it feel more familiar, like a book.

Nintendo's strategy seems to have worked. Some hospitals have even started putting Nintendo DS units in waiting rooms and wards for patients.

"We've made 10 Nintendo DS's available, and they're almost always rented out," said Atsuko Uchida, an administrator at Kyoto's Uchida Hospital, which runs a "memory loss clinic" for patients with dementia.

Doctors at the hospital even recommend elderly people purchase the console to stimulate their brains regularly at home and watch patients playing the game as an informal method of diagnosis, Uchida said.

"The game won't cure dementia. But it's a good form of stimulation," said Dr. Takeshi Kihara, a neuropsychiatrist at the clinic.

Nintendo now hopes to bring its winning formula overseas with "Brain Age," an English-language version of the brain training game.

The company has sold 8.73 million DS machines outside Japan since they first went on sale in November 2004 in the United States, and has already scored an international hit in
"Nintendogs"— in which puppies jump around in the screen and can be petted with a plastic pen.

Nintendo has said Brain Age, which launches in the U.S. on April 17 and by June in Europe, will also feature "Sudoku," the wildly popular number puzzles.

For the more tech-savvy, the company has said the DS machine will soon work as a portable TV, using a card equipped with a tuner and antenna that allows people to watch digital broadcasts— though the service won't immediately be available outside Japan.

Struggling Nintendo, based in Kyoto, badly needs a mega-hit to turn around its fortunes.

Nintendo is hoping to hit the 10 million sales mark for DS units in Japan sometime this year. Its new Revolution game console also is due later this year.

Meanwhile, Shishido is making plans to get his grown daughter to play the brain training game with him.

"If I practice hard enough, maybe I'll even beat her," Shishido said. "That's my goal. I'm not going to let her make fun of my memory again."