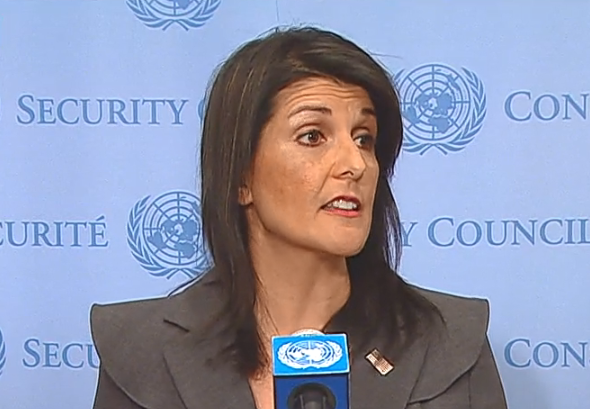 Nikki Haley, the U.S. Ambassador to the United Nations, called out the Russian government for what she called its "unilateral responsibility" for the use of chemical weapons in Syria.

"The Russian Federation has asked us to discuss what it calls 'unilateral threats' related to Syria," Haley said at a meeting of the U.N. Security Council on Friday. "What is strange is that Russia is ignoring the real threat to international peace and security that has brought us here. And it is ignoring its own unilateral responsibility for it. What we should discuss today is the use of deadly chemical weapons to murder innocent Syrian civilians."

Haley continued to say that the alleged use of chemical weapons by the Syrian government, which is led by Bashar al-Assad, constitutes "one of the most blatant and grotesque violations of international law in the world today."

Haley then went on to describe the gruesome effects of chemical weapons, which were used on the battlefield in World War I and by Nazi Germany during the Holocaust. She noted that the use of chemical weapons in war has been banned under international law since 1925, and that both Russia and Syria had signed the Chemical Weapons Convention of 1993.

"So, in theory, all of us agree on the core principle at stake today: no country can be allowed to use chemical weapons with impunity," Haley said. "Now that we have established what we all agree on, let's ask ourselves what we should be condemning here today."

She went on to accuse the Russian government of using its veto power at the Security Council "to defend the Syrian regime's multiple uses of chemical weapons." She also noted that Russia had agreed to guarantee the removal of Syria's chemical weapons, and had they followed through with that promise, "we would not be here today."

According to Haley, President Trump has not yet decided whether to respond to the recent attacks in Syria militarily. However, she said if the U.S. and its allies "decide to act in Syria, it will be in defense of a principle on which we all agree."

Haley said that the U.S. believes that the Syrian government has used chemical weapons in that nation's civil war "at least 50 times."