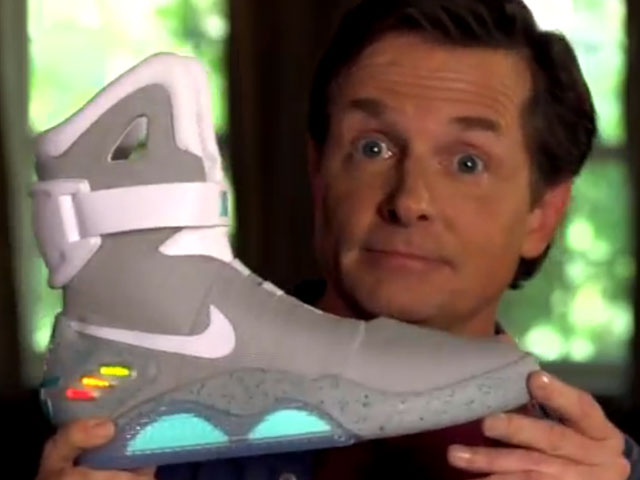 (CBS) - In "Back to the Future Part II," Marty McFly slipped on a pair of Nike Air Power Laces - the year was 2015. They were high-tops in white and gray with teal specks and wrap-around ankle straps. Okay, nothing super-cool about that - just a pair of ordinary sneakers... But, when they self-fastened electronically, you were instantly stunned and thought to yourself, "gotta have 'em!"

On September 6, YouTube user "DocEmmettBrown88" posted a teaser that gave us a look inside "McFly's closet." Over 1 million streams later, three days after the video's debut, the world can't stop buzzing about the footwear. Could these shoes be real?

Yes! The shoes are called Nike MAG and they feature glowing LED panels, plus an electroluminescent Nike logo on the straps. Cool kids and geeks alike will love them because the shoes' LED lights can be turned on with a simple pinch on the high-top's ear, according to Fast Company's blog, Co.Design. They'll glow for about five hours.

Sadly, they don't lace up electronically. For the power-lace feature, you might have to wait until 2015.

So where can you get 'em? The shoes went up for auction last night on eBay. Nike's releasing only 1,500 pairs, and net proceeds from the 10-day auction will go to the Michael J. Fox Foundation to help fight Parkinson's disease. Currently, some of the shoes are topping $9,000 in bids. Eeks!

Here's a video of Marty McFly wearing the legendary sneakers in the movie...