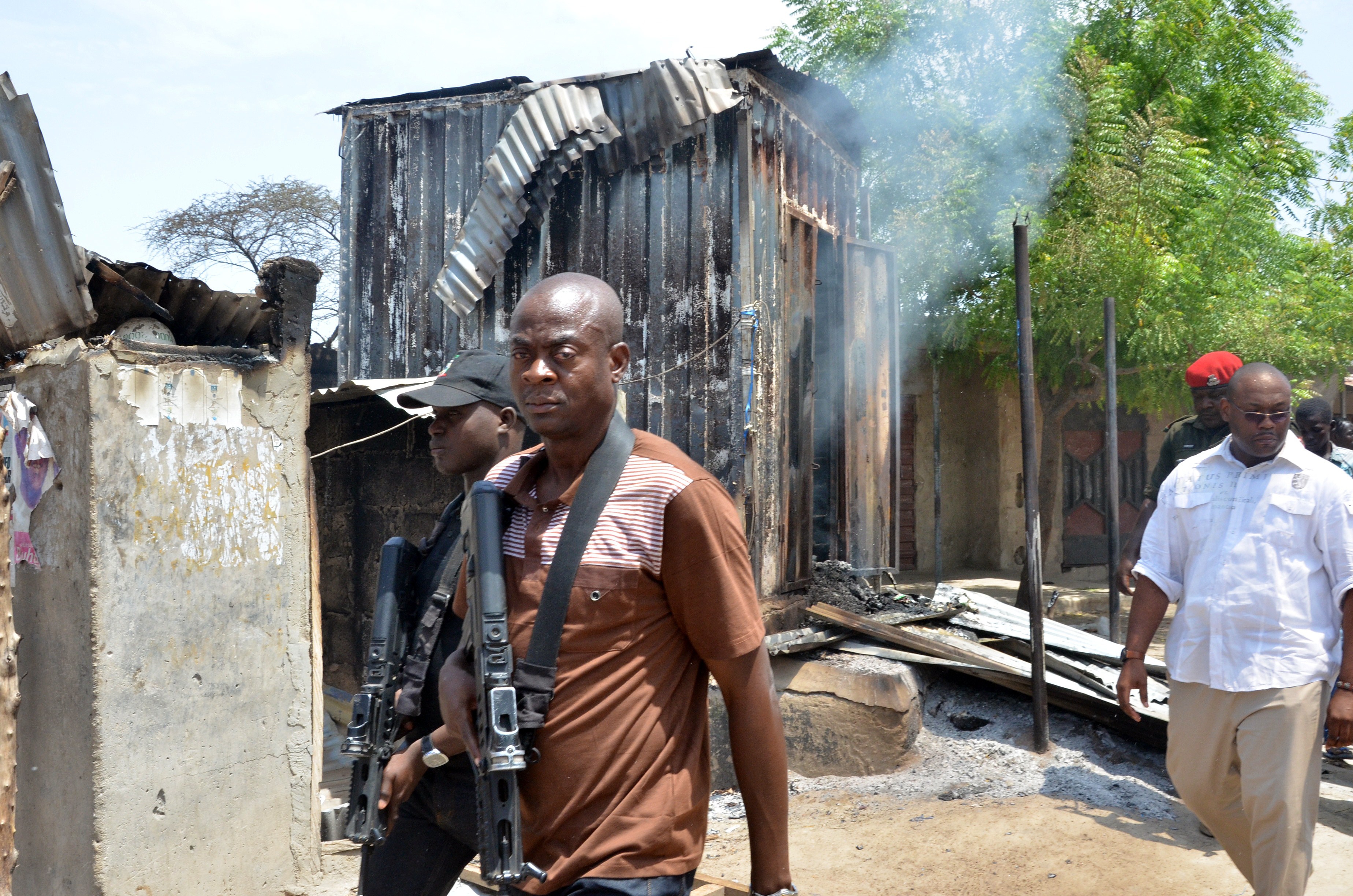 JOS, Nigeria -- A day of extremist violence against both Muslims and Christians in Nigeria killed more than 60 people, including worshipers in a mosque who came to hear a cleric known for preaching peaceful coexistence of all faiths.

Militants from the extremist group Boko Haram were blamed for the suicide bombings Sunday night at a crowded mosque and a posh Muslim restaurant in the central city of Jos; a suicide bombing earlier at a crowded evangelical Christian churc in the northeastern city of Potiskum, and attacks in several northeastern villages where dozens of churches and about 300 homes were torched.

President Muhammadu Buhari condemned the attacks on places of worship and said the government will defend Nigerians' right to worship freely.

Buhari won a bitterly contested election in part by promising to crush Boko Haram, reported CBS News correspondent Debora Patta. But since his inauguration at the end of May the militant group has stepped up its campaign of violence steadily eroding victories claimed by the Nigerian military and other regional armies.

It was the latest in a string blamed on Boko Haram extremists who have killed about 300 people in the past week - apparently after an order by the self-proclaimed Islamic State group for more mayhem during the Muslim holy month of Ramadan. Earlier this year, Boko Haram became an affiliate of the Islamic State group.

The deadliest attack came on Wednesday when more than 140 people were killed - mostly men and boys mowed down by gunfire as they prayed in mosques in the northeastern town of Kukawa.

Burials were held Monday for 51 people killed by the two bombings a day earlier in the city of Jos, said Muslim community lawyer Ahmed Garba.

Another 67 people were wounded, according to Abdussalam Mohammed, the National Emergency Management Agency coordinator.

The explosion at the Yantaya Mosque came as cleric Sani Yahaya was addressing the worshippers, survivors said. Yahaya is the national chairman of the Jama'atu Izalatul Bidia organization, which preaches that all religions should peacefully coexist.

Survivor Danladi Sani said he saw a man dressed in white take aim at Yahaya, and then blow himself up. Yahaya was unharmed, Sani added.

"He is a great Islamic scholar who has spoken out against Boko Haram, and that is why we believe he was the target," Sani told The Associated Press.

Another bomb exploded at Shagalinku, a restaurant often patronized by state governors and other top politicians for its specialties popular with Muslims, witnesses said.

Sabi'u Bako was picking up a takeout meal when he heard a massive explosion as he walked away with friends.

"The restaurant was destroyed, and we saw many people covered in blood," he said. "We can't believe that we escaped."

Jos is a hotspot for violent religious confrontations because it is located in the center of the country where Nigeria's majority Muslim north meets the mainly Christian south. The city has been targeted by bombs claimed by Boko Haram extremists that have killed hundreds.

Elsewhere in the northeast, extremists killed nine people and burned down 32 churches and about 300 homes in several villages, said Stephen Apagu, chairman of a self-defense group in Borno state's Askira-Uba local government area. He said the militia killed three militants.

The villages had been attacked three days earlier and 29 people killed.

The United States condemned the recent attacks and said it continues to provide counterterrorism assistance to Nigeria to "combat the threat posed by Boko Haram," said a statement Monday from State Department spokesman John Kirby.

Boko Haram took over a large swath of northeastern Nigeria last year. A multinational force from Nigeria and its neighbors forced the militants out of many towns, but bombings and village attacks have increased in recent weeks.

Meanwhile, Nigeria's military freed 180 detainees who had been held for up to two years, accused of being Boko Haram members. Those freed Monday included women with babies and toddlers.