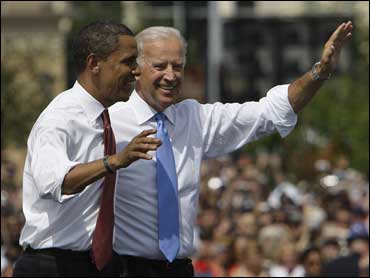 Let's say Democratic presidential candidate Barack Obama sent every one of those "here's my V.P." text messages from his own cell phone. And let's say his mean, nasty carrier charged him 10 cents for each one. According to Nielsen's numbers, his bill would've been $290,000 -- that's because the statistics firm says that the SMS campaign stunt reached 2.9 million people.

The company's Nielsen Mobile division did the math, monitoring approximately 40,000 SMS short-code lines in the U.S. and coming up with the final tally of 2.9 million.

"The VP message was sent in the late hours of Friday night and is, by many accounts, the single largest mobile marketing event in the U.S. to date," a release from Nielsen read. The initiative has been moderately criticized because it ultimately didn't work: the press reported that Obama had chosen Sen. Joseph Biden of Delaware as his vice presidential pick before anyone had had the chance to hit the "send" button on that fateful text message.

But Nielsen says that doesn't matter.

"While much has been said of the timing and the scoop by news outlets, Obama's V.P. text-message still ranks as one of the most important text messages even sent and one of the most successful brand engagements using mobile media," Nielsen's report read, adding that an estimated 116 million American use text messaging actively.

"The value of the message goes far beyond the 26 words and 2.9 million recipients. Here, Obama branded himself as cutting edge, inflated the already enormous press attention paid to his V.P. pick and further established a list of supporters' most coveted form of contact: their cell phone numbers."