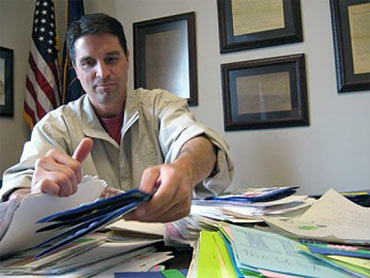 Saying he wanted to set the record straight, Oklahoma City bombing conspirator Terry Nichols has accused a man never charged in the 1995 attack with providing some of the explosives, according to a letter he wrote from prison.

Moore could not be immediately reached for comment; he has an unpublished phone number. Moore has denied any involvement in the bombing.

In the early stages of the bombing investigation, the FBI took a hard look at Moore because of his anti-government views and close relationship with McVeigh. He was never charged.

Nichols' letter was part of recent correspondence with Kathy Sanders, who lost two grandchildren in the bombing and has been investigating it independently. Nichols, 50, said he wanted to speak out because "I felt the record should be set straight," the Times reported.

Nichols' accusation came in a letter dated April 18, the day before the 10-year anniversary of the federal building bombing that killed 168 people. McVeigh was executed in June 2001.

According the Times, Nichols said FBI tests of bomb components found about a month ago at his home in Herington, Kan., would support his claim that they came from Moore and Moore's girlfriend, Karen Anderson.

"That case of nitromethane came directly from Roger Moore's Royal, Arkansas, home, and his prints should be found on that box and/or tubes, and Karen Anderson's prints may be there as well," Nichols wrote.

The Times said it could not reach Anderson for comment.

FBI agents had searched the Herington home on March 31. Officials said that agents found blasting caps and other explosive materials apparently related to the 1995 attack, buried in a crawl space that hadn't been checked earlier.

During Nichols' state murder trial last year, prosecutors said Nichols stole an estimated $63,000 in weapons and other items from Moore's home, that were then sold to help finance the terror plot.

Nichols' attorneys maintain the robbery was staged and that McVeigh, who knew Moore from a gun show and had stayed in his home, helped plan it. Neighbors also testified that they doubted Moore's honesty.

Nichols has been convicted twice — in federal court and in an Oklahoma state court — and is serving two life sentences without parole.