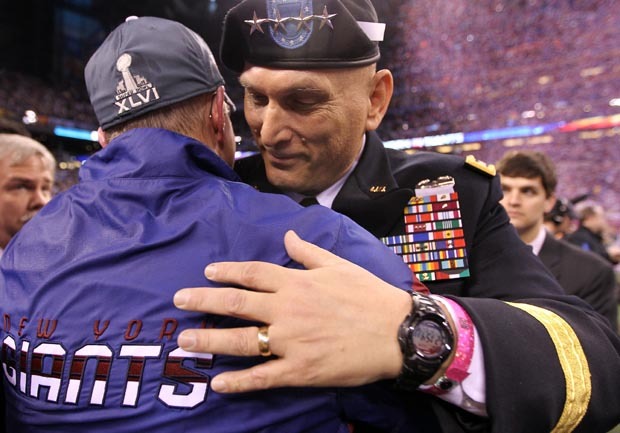 (AP) WEST POINT, N.Y. - The NFL and U.S. Army have teamed up on a long-term program to care for and prevent concussions and head trauma, as well as other health issues.

Commissioner Roger Goodell and General Raymond T. Odierno, the Army Chief of Staff, announced the initiative at the U.S. Military Academy on Thursday.

Goodell and Odierno cited the common traits between soldiers and football players, particularly when dealing with stressful situations that can lead to injury.

"We can bring greater awareness not just to our two organizations, but to the general public," Goodell said of the program. "We will do all we can to get our players and the soldiers to under what each other goes through. We'll work to change our cultures by working closely together."

Changing the culture is the biggest test, Goodell and Odierno said during a panel discussion on safety before nearly 200 cadets. Odierno even admitted he would have struggled to take himself out of combat with a non-visible injury such as a concussion. But he recognizes the need for leaders who will overrule the injured person.

"That is our most difficult challenge," Odierno said. "We all base ourselves on the warrior ethos and the soldiers' creed as soldiers. If you have a problem and you identify it, to me that is courageous, too. But self-selection is really difficult. There has to be a bond to take care of each other."

"We understand the risk involved when you play any sport and we want people to share the responsibility," Goodell said. "It's not just the player injured who has to raise his hand. It's the coaches, his teammates."

The league is being particularly proactive in the head trauma diagnosis and treatment area after dozens of lawsuits against it were consolidated into one massive complaint involving more than 2,400 people, most of them former players. By joining with the military, it hopes to "integrate the uncompromising devotion to win with a need to address traumatic brain injuries with the necessary care, consideration and commitment to prevention that these injuries require," Goodell and Odierno said in a letter sent to soldiers and current and former NFL players.

Also on hand were former players Troy Vincent, now the NFL's vice president of player engagement, and Bart Oates. Both said they often were concussed while playing — Vincent seven times — and Oates said he returned to action with a concussion.

"Would I try to stay in the game again? Absolutely," he said, noting that was — and often still is — the mentality of players. "You can't be expected to self-police yourself as a player. You won that position, it's your job, you are there to help the team win and that is the most important thing. So individually, if you are trying to police it, it can't be fixed."

To change that mindset, Oates insisted educating players at a young age to what he wasn't aware of about concussions when he was growing up is essential.

Vincent believes the protocols and education on awareness of head injuries within the NFL will work, but agreed with Oates that athletes won't self-regulate.

"There's no such thing as making the right decision in the heat of battle. You stay in the game to win," Vincent said.

But Goodell explained that making the correct decision in the end will prolong players' careers. And that correct decision — whether it involves taking yourself out of the game or someone else forcing you to leave when you show signs of head trauma — will become easier to make as everyone becomes more aware of the symptoms.

The panel discussion was the third between the NFL and the military, including one at the Pentagon. The new program guarantees more interaction.

"A lot of attributes are quite alike between soldiers and NFL players," Odierno said. "We've come together, two groups of people who are dedicated and courageous, to see how we can help both players and soldiers to deal with this important issue. With nearly 1.1 million soldiers, we have a wide audience we have to deal with. I think this (program) will help bring more awareness to these issues."