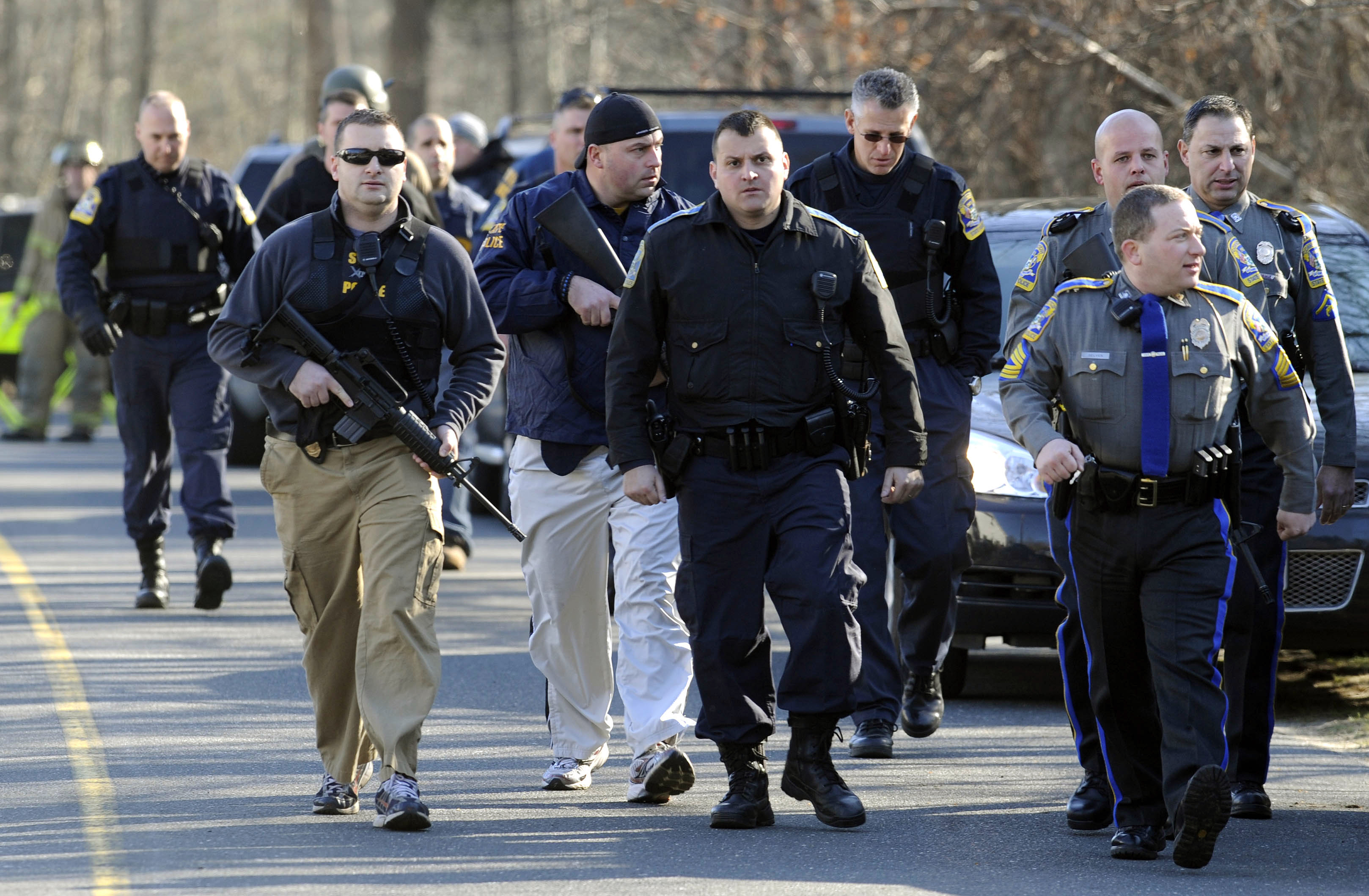 NEW HAVEN, Conn. A cache of weapons including guns, more than a thousand rounds of ammunition, a bayonet and several swords was found in the home of the gunman who carried out the Newtown school shooting, according to search warrants released Thursday.

Adam Lanza killed 26 people inside Sandy Hook Elementary School and took his own life within five minutes of shooting his way into the building, State's Attorney Stephen J. Sedensky III said in a statement accompanying the release of the warrants in the Dec. 14 massacre.

The documents say that Lanza was found dead in the school wearing military-style clothing and a bulletproof vest, but the investigation later found that Lanza did not wear such a vest.

The arsenal seized from Lanza's home and the car he drove to carry out the massacre provided glimpses into the world of a troubled young man, but it does not answer the question of what could have motivated the attack. Investigators say it will take until June or later to complete the investigation.

Sedensky said Lanza killed all 26 victims inside Sandy Hook Elementary School with a Bushmaster .223-caliber rifle before taking his own life with a Glock 10 mm handgun. He said Lanza had another loaded handgun with him inside the school as well as three, 30-round magazines for the Bushmaster.

CBS News correspondent John Miller, a veteran of the LAPD, NYPD and the FBI, offered an analysis of the sophisticated weaponry. "What struck me was the number of rounds fired and the number of rounds not fired," he said. "You had six magazines -- 30-round magazines -- a possibility of 180 rounds. You've got 154 shell casings recovered, indicating those got fired. But three of the magazines aren't empty. One of them has 10 rounds. Another has 12. Another has 13. And that really suggests that what Adam Lanza was doing was pretty sophisticated tactical stuff, what we call the tactical reload."

Sedensky said 154 spent .223 casings were recovered at the scene. A loaded 12-gauge Saiga shotgun was found in the Honda Civic Lanza drove to the school and the warrants said there were two magazines containing a total of 70 shotgun rounds. The warrant does not offer further explanation, and authorities did not respond to questions, but some Saiga shotguns can be fitted with magazines that hold up to 30 rounds.

In Washington, the massacre prompted President Obama and congressional Democrats to try and enact stricter gun-control measures, such as universal background checks for gun purchases, which Republicans and the National Rifle Association say won't deter gun violence. A CBS News poll released this week found that support for stricter gun-control laws overall has dropped since the shooting, from a high of 57 percent to 47 percent.

On Thursday at the White House, Mr. Obama, flanked by grim-faced mothers who have lost their children to guns, evoked memories of the tragedy in urging lawmakers to take action.

"Shame on us if we've forgotten," Mr. Obama said. "I haven't forgotten those kids."

Mark Barden, whose 7-year-old son, Daniel, was killed at Sandy Hook, said he was not surprised by the details released Thursday.

"Most of this is pretty high-level stuff that we were aware of already and it just reminds me of what happened, that a gunman stormed his way into an elementary school and shot to death 26 people, 20 of which were first-grade boys and girls," Barden said.

"The information doesn't help bring back Dylan or any of the others who lost their lives that day, which is why I would rather focus on the changes that can come from this," Nicole Hockley, whose 6-year-old son died in the attack, told CBS News.

At the Lanza house, investigators found books about autism and Asperger's syndrome as well as a NRA guide to pistol shooting, the warrants said. The NRA said Lanza and his mother were not members. Another book found at the home with tabbed pages is titled: "Train Your Brain to Get Happy."

In the days after the shooting, Nancy Lanza's friend Mark Tambascio told CBS News that she struggled with how to handle the problems associated with Adam's Asperger's.

Bill Sherlach is the husband of Mary Sherlach, the school psychologist killed at Sandy Hook. He believes Lanza's mother is partly responsible. "There's some culpability there, in my mind ," he told CBS News correspondent Elaine Quijano. As for what more she could have done, he also added: "To me it looks like there was nothing done, so anything would have probably been helpful. Somebody should have been able to say, 'You know, we need to do something here because this is getting to be a little more than I can handle. Bring in some professional help.'"

CBS News spoke to experts in Asperger's syndrome and they said people with the condition are no more likely to commit violence than anyone else.

Writings and journals that belonged to Lanza were seized by police and turned over to the FBI for analysis. They also found three photos containing images of what appears to be a dead person covered with plastic and blood.

Police said they found a smashed computer hard drive and a gaming console in the house.

On Dec. 14, the day of the shooting, interviews conducted by FBI agents found that an unnamed subject, presumably Lanza, "rarely leaves his home" and that the source considered "him to be a shut in and an avid gamer," listing "Call of Duty" among the games he played.

The FBI's source told agents that Sandy Hook Elementary "was Adam Lanza's 'life,'" according to the search warrants.

The source of the information was redacted from the search warrants released to media outlets, including CBS News.

Last month, CBS News senior correspondent John Miller reported that Lanza blacked-out the room where he played his tactical shooting games after a relationship between his divorced mother, Nancy Lanza, and her boyfriend grew serious enough that the boyfriend had spent the night at the Lanza home.

Lanza had also blacked-out his own bedroom to make it just as dark as where he played his games, Miller reported.

Investigators found a holiday card containing a check made out to Lanza for the purchase of a firearm, authored by his mother.

Sedensky said that before driving to the school to carry out the massacre Adam Lanza shot Nancy Lanza in her bed with a .22 caliber rifle.

"There was no indication of a struggle," Sedensky said.

Investigators found a rifle on the floor near the bed, according to one search warrant. She sustained an apparent gunshot wound to her forehead.

"Does she have accountability? Oh, I think she has a lot of accountability," Alissa Parker told O'Donnell. "Do I think it was her fault? I'm sure that there were things that, you know, she's going to have to be accountable for, but, again, it's not my burden to carry."

Since the shooting, the Parkers met privately for more than an hour with Adam Lanza's father Peter Lanza, with whom they have found peace.

Documents indicate authorities found a gun safe with shotgun shells in the house and numerous boxes of bullets. In a bedroom closet, they found ear plugs, a handwritten note regarding ammunition and magazines, paperwork on guns and a metal bayonet.

In a top drawer of a filing cabinet, they found paper targets. In a duffel bag, they found ear and eye protection, binoculars, numerous paper targets and an NRA certificate that belonged to Adam Lanza.

Among the items seized was a news article on a 2008 school shooting at Northern Illinois University.

Previously, CBS News correspondent Bob Orr had reported that Lanza showed interest in other mass killings and authorities found literature on other massacres at his house indicating a particular obsession with Anders Behring Breivik, a Norwegian man who killed 77 people in July 2011.

A judge's order to seal the warrants expired on Wednesday, and a Danbury Superior Court judge granted a request by Sedensky to withhold some details. Sedensky asked to redact the name of a witness, saying the person's safety might be jeopardized if the name were disclosed. He also asked that the release not include other information such as telephone numbers, serial numbers on items found and a few paragraphs of an affidavit.

Until now, prosecutors had made few details of the Newtown investigation available, despite pressure to do so from the governor, who criticized leaks to the press and lawmakers who clamored for more details as they craft legislation on mental health and gun control.

Gov. Dannel P. Malloy announced last week that additional information would be released at his request. He expressed concern that some information about the shooting rampage at Sandy Hook reportedly disclosed by a top state police commander at a recent law enforcement seminar in New Orleans was leaked.

In his statement, Sedensky said he ordered a stop to any presentations involving evidence in the case to prevent such disclosures. He said the investigation is ongoing.

Senate President Donald E. Williams Jr. said this week that legislative leaders are eager to review the search warrant documents before finishing work on a bipartisan bill that addresses gun control and other issues related to the massacre.