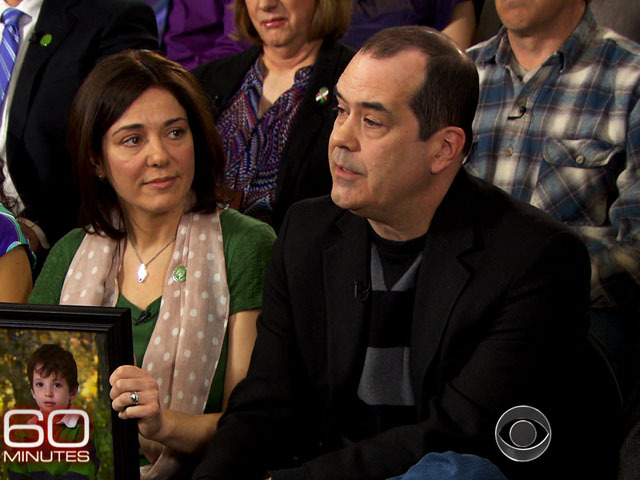 We spoke to Nicole Hockley, who lost Dylan, Francine and David Wheeler, who lost Ben, and Bill Sherlach, whose wife Mary was the school psychologist.

NICOLE HOCKLEY: This is Dylan. I think the picture kind of sums him up perfectly. He was always smiling and always laughing. And he was very pure.

BILL SHERLACH: Mary was the school psychologist and truly believed that that was the place that she was meant to be, doing what she would call "God's work."

DAVID WHEELER: In a way, Ben taught me to be a better parent. He was a -- I would even say rambunctious boy, just all boy. And -- and our house is very quiet.

SCOTT PELLEY: The legislature has decided to limit the size of magazines in Connecticut to ten rounds. The gunman at Sandy Hook was using 30-round magazines. Now, I've heard the argument made, "You can change these magazine clips in these rifles in a matter of two seconds. So what difference does it make?"

BILL SHERLACH: Well, I mean, there was one instance where it wasn't two seconds. And it allowed 11 kids to get out of the classroom.

SCOTT PELLEY: Tell me about that.

BILL SHERLACH: It's just a simple arithmetic. If you have to change magazines 15 times instead of five times, you have three times as many incidents where something could jam, something could be bobbled. You just increase the time for intervention. You increase the time frame where kids can get out. And there's 11 kids out there today that are still running around on the playground pretty much now at lunchtime.

Watch: Scott Pelley speaks with the parents of Newtown victim Catherine Hubbard and the state trooper who helped them cope, below.

SCOTT PELLEY: Who escaped from these classrooms.

NICOLE HOCKLEY: Had he had, you know, 30 magazines instead of the ten, that's a lot of weight to carry. So he might have not brought as much ammunition into the school in the first place. ... He left the smaller capacity magazines at home, that was a choice the shooter made. He knew that the larger capacity magazine clips were more lethal.

SCOTT PELLEY: Do any of you fear that after only four months, the memory of how we felt on that day is beginning to fade?

FRANCINE WHEELER: Four months? It feels like it just happened a moment ago. And yet -- and yet, it's been years since I've seen my son. Okay? So whether it's, you know, become less on the American mind right now, it will -- it will come back, because we are here, and we're not going.

The full interview about what happened December 14 and the days that followed will be seen on "60 Minutes" this Sunday at 7:00 p.m. ET.