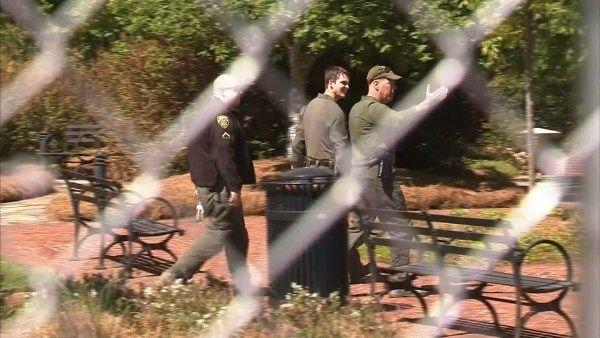 Police barricaded a park and several businesses in Newnan, Georgia Friday ahead of a planned neo-Nazi rally on Saturday, CBS Atlanta affiliate WGCL reports. The rally is being held by the National Socialist Movement, which holds rallies every year to mark Adolf Hitler's birthday.

There will be over 400 officers on hand, and WGCL reports that 100 people are estimated to attend. The white nationalist group has a permit to hold the rally from 3 to 5 p.m.

Newnan Assistant City Manager Hasco Craver told the Times-Herald newspaper that a specific gathering area for protesters will be along Greenville Street, adjacent to the park.

Atlanta Antifa's website indicated they are planning to hold a rally between 1:30 and 3 p.m., the Newnan Times-Hearld reports.

The mood was eerie in the city on Friday as police continued to place barricades and getting the lay of the land ahead of the rally, WGCL reports.

"It's scary that this is coming to our town because we didn't ask for this," said Gina Godfrey. "If you go up against them, what could happen, because they are not standing up for love. They are standing up for hate."

Edwina Jackson isn't going to let the white supremacists run her out of the place she calls home.

"I'm not going to let that fear get to me," she said. "I'm going to come through. I'm going to see because if I had to be that light that shines through, so you never know what can take place."