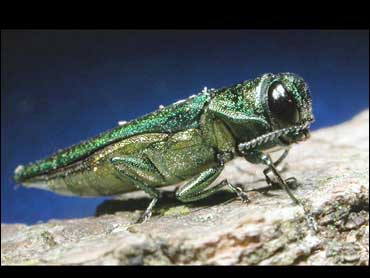 New York's fight against exotic pests such as lake-choking mollusks, rampant alien weeds and wasps that attack pine trees will be crafted by a new state office.

The new Department of Environmental Conservation office will involve biologists and foresters in developing ways to combat invaders. Headed by biologist Steve Sanford, the four-member department will also work with universities, other U.S. state agencies and non-profits to support research and raise public awareness.

While manual labor has been an effective deterrent in spots, some nonnative species are already well established, and others are on the horizon. One of the tasks of the Office of Invasive Species is to map and record all those threats to native wildlife.

"Even though many of them have been around for years, we have never had a coordinated system in place to attack the problem, a system that threads together the issues of public outreach, funding and legislation needs, and research," Environmental Conservation Commissioner Pete Grannis said in a statement Wednesday.

Common and spreading nonnative plants in New York include phragmites, Japanese knotweed, Eurasian watermilfoil and garlic mustard. Among animals are the zebra mussel, Asian Long Horned Beetle, Round Goby and the Sirex wood wasp, which spreads a fungus that can devastate pine trees. Foresters are preparing to confront the Emerald Ash Borer, a tree-eating beetle that has been moving east and recently appeared in Pennsylvania.

Humans are suspected of spreading pests through infested wood, boat ballast, bait fish and other means. "You need to have eyes out there to know when something comes in," Sanford said

Besides prevention, fast identification and "rapid response" eradication are important, Sanford said. And even with well established non-natives like phragmites - the bamboo-like reed or tall grass now common in New York wetlands - "biocontrols" may offer answers.

Predators or parasites that keep a species in check elsewhere might "very carefully" be applied here. "You don't want to make the problem worse," he said.

The 2007-08 state budget included $5 million for invasive species programs, with grants for eradication, public outreach through Cornell Cooperative Extension and a plan to develop virus-free planting stock for fruit growers at the state Agricultural Experiment Station in Geneva. A new law this year established the interagency state Invasive Species Council, which will meet for the first time Feb. 13, with an advisory committee of business, academic and conservation groups.

"Ultimately we will have a map on the Web that anybody can go to and either type in a location or type in a species," Sanford said. Arrangements are being made for the New York Natural Heritage Program to do the mapping and New York Sea Grant to establish a definitive library on invasives, he said.