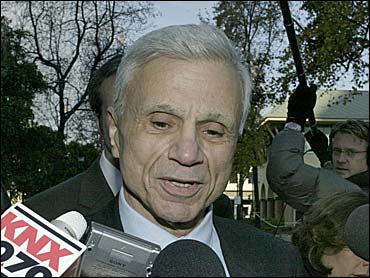 Robert Blake's defense lawyer has vowed to move ahead with the actor's murder trial despite a recent break-in at the lawyers' apartment-office and the theft of a computer.

"We want this jury and we want this trial," M. Gerald Schwartzbach said.

Blake, the former star of the "Baretta" TV series, is accused in the 2001 shooting death of Bonny Lee Bakley, whom he married months earlier after learning he was the father of her child.

The 71-year-old has pleaded not guilty to murder and solicitation of murder. He remains free on $1.5 million bail, but is confined to his home.

Opening statements in the case were scheduled to begin Monday, but a strange twist in the case suggests a delay is possible.

On Wednesday, the day the jury was sworn in, someone broke into Schwartzbach's apartment-office, and stole a computer containing what a court representative called "the heart and soul of the defense case."

Police were investigating and the judge put off responding until Monday.

CBSNews.com Legal Analyst Andrew Cohen doesn't expect a delay, because "it's likely that a lot of that information would be in other places as well and you can't just delay the trial indefinitely until you find the computer because that could never happen."

Blake was not arrested or charged until 11 months after the killing, and additional delays came when he changed lawyers and a five-week preliminary hearing was held to determine whether there was enough evidence for a trial.

"When it comes to a lack of physical evidence the Scott Peterson murder case has nothing on the Robert Blake case," says Cohen. "Again, no direct evidence, no eyewitnesses and precious little scientific evidence. And as defense attorneys certainly will point out, Bonnie Lee Bakley's lifestyle was markedly different from Laci Peterson's."

From the beginning, the defense's strategy has been to trash Bonnie Lee Bakley, calling her a celebrity-stalking con-artist who trapped Blake into marriage with a pregnancy, reports CBS News Correspondent Sandra Hughes. Bakley was someone with a lot of enemies.

With no eyewitness or DNA linking Blake to the crime, prosecutors will rely on Blake's own words.

"If I'm going to die in that box, I want to talk before I go," he said in a broadcast interview.

He's talked so much since the crime, he's lost a string of high-profile attorneys.