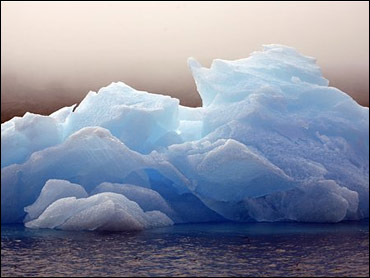 An already relentless melting of the Arctic greatly accelerated this summer, a warning sign that some scientists worry could mean global warming has passed an ominous tipping point. One speculates that summer sea ice might be gone in just five years.

Greenland's ice sheet melted nearly 19 billion tons more than the previous high mark, and the volume of Arctic sea ice at summer's end was half what it was just four years earlier, according to new NASA satellite data obtained by The Associated Press.

"The Arctic is screaming," said Mark Serreze, senior scientist at the government's snow and ice data center in Boulder, Colo.

Just last year, two top scientists surprised their colleagues by projecting that the Arctic sea ice was melting so rapidly that it could disappear entirely by the summer of 2040.

This week, after reviewing his own new data, NASA climate scientist Jay Zwally said: "At this rate, the Arctic Ocean could be nearly ice-free at the end of summer by 2012, much faster than previous predictions."

So scientists in recent days have been asking themselves these questions: Was the record melt seen all over the Arctic in 2007 a blip amid relentless and steady warming? Or has everything sped up to a new climate cycle that goes beyond the worst case scenarios presented by computer models?

It is the burning of coal, oil and other fossil fuels that produces carbon dioxide and other greenhouse gases, responsible for man-made global warming. For the past several days, government diplomats have been debating in Bali, Indonesia, the outlines of a new climate treaty calling for tougher limits on these gases.

What happens in the Arctic has implications for the rest of the world. Faster melting there means eventual sea level rise and more immediate changes in winter weather because of less sea ice.

In the United States, a weakened Arctic blast moving south to collide with moist air from the Gulf of Mexico can mean less rain and snow in some areas, including the drought-stricken Southeast, said Michael MacCracken, a former federal climate scientist who now heads the nonprofit Climate Institute. Some regions, like Colorado, would likely get extra rain or snow.

More than 18 scientists told the AP that they were surprised by the level of ice melt this year.

"I don't pay much attention to one year ... but this year the change is so big, particularly in the Arctic sea ice, that you've got to stop and say, 'What is going on here?' You can't look away from what's happening here," said Waleed Abdalati, NASA's chief of cyrospheric sciences. "This is going to be a watershed year."

Records for Arctic melt were shattered in 2007 in the following ways: