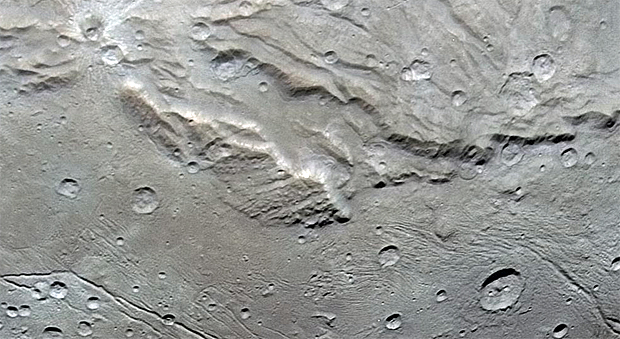 High-resolution pictures of Pluto's large moon Charon, captured when NASA's New Horizons probe flew past the dwarf planet on July 14 and transmitted back to Earth late last month, show a huge belt of fractures and canyons four times as long as the Grand Canyon on Earth and up to twice as deep in some places, the agency said Thursday.

"It looks like the entire crust of Charon has been split open," John Spencer, deputy lead of the New Horizons Geology, Geophysics and Imaging team, said in a NASA statement. "With respect to its size relative to Charon, this feature is much like the vast Valles Marineris canyon system on Mars."

The new pictures are the sharpest yet of enigmatic Charon, roughly half the size of Pluto and the largest moon relative to its planet in the solar system. The images reveal a remarkably varied surface that indicates a "complex and violent history."

The canyon system stretches more than 1,000 miles across Charon's surface and likely extends around into the moon's unseen far side.

"We thought the probability of seeing such interesting features on this satellite of a world at the far edge of our solar system was low, but I couldn't be more delighted with what we see," said Ross Beyer, a GGI affiliate with the SETI Institute and NASA Ames Research Center.

The images also show smooth plains south of the canyon system, known as Vulcan Planum, that have fewer impact craters and appear to have undergone wide-scale resurfacing of some sort. What might have caused the resurfacing is under discussion with one possibility being a phenomenon known as "cryovolcanism."

"The team is discussing the possibility that an internal water ocean could have frozen long ago, and the resulting volume change could have led to Charon cracking open, allowing water-based lavas to reach the surface at that time," said Paul Schenk, a New Horizons researcher with the Lunar and Planetary Institute.

Even sharper pictures, along with data on Charon's composition, are expected to be downlinked in the months ahead. All in all, it will take some 16 months for New Horizons to beam back all of the data and images collected during the probe's historic flyby.