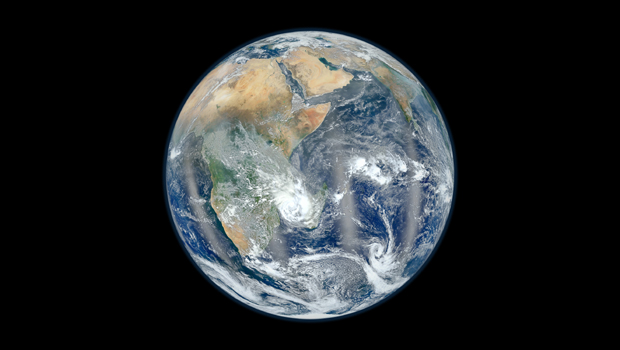 Where, oh where, is the planet's missing heat?

In 1999, the feverish rise in Earth's surface temperatures suddenly slowed, even as greenhouse gas emissions escalated. This unexpected slowdown has been called a global warming hiatus or global warming pause. Most climate scientists don't think this hiatus means global warming went kaput, but the reason (or reasons) for the slowdown has scientists flummoxed. Researchers have offered more than two dozen ideas to explain the missing heat.

Now, a study published on Aug. 21 in the journal Science suggests a natural climate cycle in the North Atlantic Ocean gobbled Earth's extra heat. While the study is unlikely to settle the scientific debate, it does support the idea that Earth's global warming continues in the ocean, even when air temperatures stay flat.

"It's important to distinguish between whether ocean heat storage is responsible for the hiatus versus not enough heat reaching the surface of the Earth," said study co-author Ka-Kit Tung, of the University of Washington in Seattle. "We did find enough heat stored in the North and South Atlantic that, if it had remained on the surface, it would have resulted in rapid warming." [Infographic: Earth's Tallest Mountain to Deepest Ocean Trench]

Scientists have blamed the oceans for the global warming pause before, but they pointed their fingers at the Pacific, not the Atlantic. However, in seeking to test this idea with temperature data, oceanographer Xianyao Chen, of the Ocean University of China in Qingdao, and Tung, an atmospheric scientist, said they couldn't find the missing heat in Pacific Ocean temperature measurements.

"If these models are true, we should be able to find the missing heat, and under the Pacific we couldn't find enough heat to explain the hiatus," Tung told Live Science.

Tung and Chen then searched ocean by ocean until they hit on the North Atlantic, where the heat was playing hooky. The pair primarily relied on Argo floats, which record ocean temperature and salt content down to 6,560 feet (2,000 meters). These worldwide floats reached their most comprehensive levels beginning about 2005. Other records from floats, ships and buoys filled in the timeline since 1970.

But the millions of data points don't conclusively prove that the North Atlantic Ocean is devouring heat. "Unfortunately, the massive array of ocean temperature measurements by Argo floats has only been made after the early 2000s, just when the present hiatus in surface warming was starting," said Matthew England, a climate scientist at the University of New South Wales in Australia, who was not involved in the study. "So being conclusive about each ocean basin is limited by data availability."

Tung and Chen noticed that the North Atlantic's heat content (a measure of stored energy) shifted in 1999, about when the hiatus began. The ocean started absorbing heat at depths below 984 feet (300 m). (The South Atlantic Ocean also took up some heat.) These regions stored more heat energy than the rest of the world's oceans combined, even the enormous Pacific Ocean, the researchers' temperature data show.

So how does the Atlantic cool an entire planet? The likely culprit is a natural climate cycle linked to the Atlantic Meridional Overturning Circulation (AMOC) current, Tung said. The AMOC is part of a worldwide ocean conveyor belt. Here's how the AMOC works: In the North Atlantic, salty tropical water flowing north cools off and sinks. This water, dense because it is cool and salty, heads south toward the equator, then eventually rises again in the South Atlantic. When the water sinks, it traps heat in the ocean depths. Ocean surface temperatures drive the current: fast when cold, slow when warm. [Images: The World's Biggest Oceans and Seas]

Between 1945 and 1975, the cycle was in a cool phase, sucking up atmospheric heat at a rapid pace. Toward the end of this cycle, in the 1970s, scientists noticed a suspected "global cooling" that was touted as the beginning of a possible Ice Age. But then the AMOC flipped to warming, corresponding to the rapid uptick in global temperatures. Finally, in 1999, the current switched back to a cold, speedy plunge into the ocean depths, taking extra heat along with it.

Such natural cycles make global warming look more like a staircase than a steady rise in temperatures, Tung said. "Right now, we're on the flat part of the staircase. We still have a few more years of the hiatus."

However, others scientists remain convinced the Pacific plays an important role in the global warming hiatus. Several recent studies affirm the link between the pause and the changes in the Pacific. An Aug. 3 study in the journal Nature Climate Change found that faster trade winds over the Pacific bring up cold water and cool the atmosphere. An Aug. 17 study, also in Nature Climate Change, suggested the Pacific Decadal Oscillation climate cycle might be responsible for the hiatus. That cycle flips every 20 to 30 years.

"I still think the Pacific Ocean is playing the lead role in this ocean heat uptake, but this study is important as it points to an additional role from the Atlantic and Southern Oceans," said England, who co-authored the Aug. 3 Nature Climate Change study.

Elon Musk: A.I. may be "more dangerous than nukes"