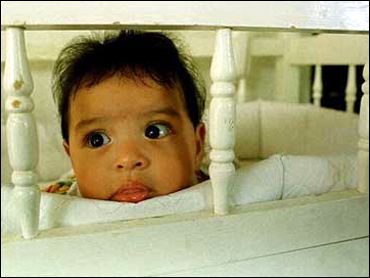 When Jamie Lazzaro's 8-month old baby Jim died suddenly one morning several years ago, doctors said that Sudden Infant Death Syndrome, or SIDS, was responsible. Years later, another doctor found instead that the little boy had died from a genetic disease called VCLAD. It's a rare disorder, but one that could have been treated if the hospital where Jim was born had run a $25 test. It didn't.

"It's a bitter pill to swallow," Lazzaro says. "If there was a test, then why didn't we get it?"

That's a question more people may be asking soon.

But while experts say diagnosis at birth might prevent several hundred deaths and life-threatening illnesses a year, few hospitals test newborns for these rare but devastating metabolic diseases.

Doctors cite several reasons for the lack of testing. While the individual tests themselves are inexpensive, processing them often requires costly, specialized equipment and doctors need special training to run the tests. The field of metabolic diseases is relatively new, meaning many health providers aren't fully aware of the danger the ailments pose to newborns. The disorders are fairly rare, altogether thought to strike one in 5,600 births. About 3 percent of SIDS cases turn out, like Jim, to be a metabolic disease gone undiagnosed.

However, every state now tests every newborn for two rare diseases that cause retardation if untreated: hypothyroidism and the metabolic disease phenylketonuria.

David Millington of Duke University, who developed the mass spectrometry test with Dr. Charles Roe of Baylor University Medical Center, says: "It's the most useful test ever done on most people at birth, by far."

North Carolina, Massachusetts and Wisconsin have begun offering supplemental testing for metabolic diseases. South Dakota hospitals just started mailing blood samples to Baylor for testing, and some in Texas do, too. About two-thirds of Pennsylvania hospitals and some in other states hire Pittsburgh-based Neo Gen Screening for testing.

Some of these diseases, like VCLAD, are called "fatty acid oxidation disorders," in which patients lack enzymes that change stored fat into energy. If patients go longer than about eight hours without eating, or catch an illness that causes vomiting, they can suddenly die. Undigested fats also clog their hearts and livers. Other disorders cause a toxic buildup of amino acids. Affected babies appear healthy at birth. But the first attack sometimes is lethal.