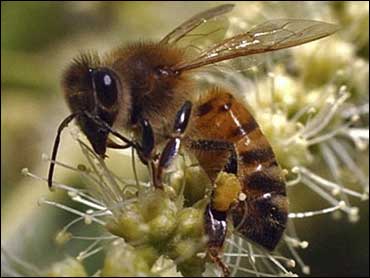 Researchers have a pair of new suspects in the mysterious collapse of honey bee colonies across the country.

The widespread damage to the bees has caused concern because the insects are needed to pollinate scores of crops.

Previous studies have looked at the possibility of multiple viruses found in the bee colonies as well as the potential harm from pesticides, but researchers have yet to pin down an exact cause.

The new study said the suspect virus is insect iridescent virus, which is similar to a virus first reported in India 20 years ago, as well as a virus found in moths.

They said it affects the abdomens of bees, and the tissues may take on a bluish-green or purplish hue. The fungus is called Nosema ceranae, and this can sicken bees if they ingest the spores.

Robert Cramer, a pathologist at Montana State University in Bozeman said, "There seems to be a correlation between the presence of these two pathogens together. We envision the bee gets an infection from one or the other, and this causes the bees to become stressed, which then allows the second infection to come in and more effectively cause disease."

The analysis of the bees was done at the Army's Edgewood Chemical Biological Center at Aberdeen Proving Grounds in Maryland.

Replacing humans: Robots among us
Thanks for reading CBS NEWS.
Create your free account or log in
for more features.
View CBS News In
CBS News App Open
Chrome Safari Continue
Be the first to know
Get browser notifications for breaking news, live events, and exclusive reporting.