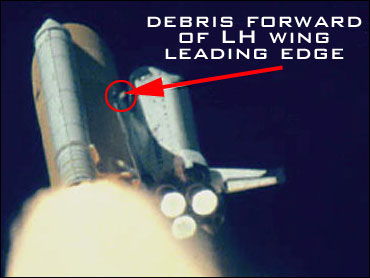 In a major step toward resuming launches of the space shuttle, NASA officials said Tuesday they have completed improvements that will prevent the falling debris problem that destroyed space shuttle Columbia and killed seven astronauts.

The first improved and redesigned tank is scheduled to be shipped from the Michoud Assembly Facility near New Orleans on Friday and will arrive at the Kennedy Space Center five or six days later. It will then be further tested, mounted on space shuttle Discovery and readied for a launch in May or June, officials said.

Sandy Coleman, NASA's external tank project manager, said that testing of improvements on the tank "gives us confidence that problems like what happened on Columbia will not happen again."

"Everyone feels really good about the quality of the work that has been accomplished here and the redesigns that have been made," Coleman said Tuesday in a telephone news conference from the Marshall Space Flight Center in Huntsville, Ala. "We all know that this tank is going to be safe."

The changes in the external tank add less than 150 pounds in weight. The added costs are still being tallied, said Coleman. The old style fuel tanks cost about $40 million and Coleman said the new tank will be more expensive.

The first tank will be loaded onto a barge for its five-to-six-day trip "through the Gulf Mexico to the tip of Florida, and then up to Kennedy Space Center," Coleman said.

Navy: Hundreds of dolphins, whales to die from bomb tests, sonar use

Bright object on Mars is plastic from Curiosity

That will happen Friday, Dec. 31, reports CBS News Correspondent Peter King. Before that, however, four inspection teams will reexamine it.

"We want to go make sure that there's no damage, nothing that's been done to the vehicle in processing," Ron Wetmore, Lockheed-Martin vice president for the External Tank Project, said.

The external tank contains liquid hydrogen and oxygen which are the propellants used by the shuttle's main rocket engines during launch. The supercooled propellants cause the formation of ice on the outside of the tank as the shuttle is prepared for launch.

Insulation, applied as a foam, reduces the amount of ice. But investigators believe chunks of the foam insulation peeled off the external tank during launch and led to the destruction of Columbia. The debris, moving at a high relative speed, ripped a hole in the left wing of the space shuttle. On Feb. 1, 2003, as the spacecraft re-entered the Earth's atmosphere, superheated gas penetrated the wing through the hole and melted metal struts. The craft shattered, showering east Texas with flaming debris. Seven astronauts were killed.

The Columbia Accident Investigation Board conducted tests to prove that chunks of the light weight foam insulation could cause the damage that was fatal to Columbia. The tests included using an air canon to fire foam insulation chunks at test wing panels.

To correct the problem, engineers from NASA and Lockheed Martin Space Systems, manufacturer of the fuel tanks, conducted extensive tests to find out why the foam insulation broke loose during launch.

This led to design changes to eliminate most of the peeling foam and to control ice on the tank. The changes include new ways of applying the foam insulation, the addition of heaters at key points to prevent the formation of ice before launch, and adding cameras that can monitor the outside of the tank during launch.

"We can never completely eliminate foam coming off the tank," Coleman said Tuesday. But she said tests suggest that any debris that does fly free will not cause damage like that which destroyed Columbia.

Redesign of the external tank was considered to be a key and critical part of NASA's effort to return the shuttle to space, but is only one of a long list of recommendations from the Columbia Accident Investigation Board. NASA also is designing ways to check for launch damage to the space shuttle after the vehicle is in orbit. The agency is also developing ways for spacewalking astronauts to fix damage to wing panels like that which destroyed Columbia.