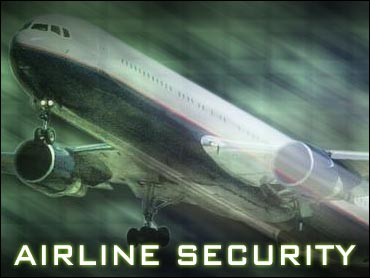 The United States will ensure that other governments enforce a new American requirement placing armed law enforcement officers on some flights to prevent hijackings, Homeland Security Secretary Tom Ridge said as the nation headed into the New Year's holiday with terror threats high.

Ridge also assured Americans who may be concerned about holiday air travel that aviation in the United States since the Sept. 11, 2001, attacks "has risen to new heights of security." He encouraged Americans to continue with their holiday plans, even amid the orange alert level, or high alert status, put in place more than a week ago.

"The full force of Homeland Security all across this nation is at work to keep you safe," he said Monday.

Officials say it's possible al Qaeda is putting out false information about plans to hijack airliners in order to disrupt holiday travel, reports CBS News Correspondent David Martin, but no one is willing to take a chance the threats aren't real.

The orange alert will stay in effect through the holidays and possibly beyond, Ridge said. Officials have not seen a reduction in air travel since the alert.

The new directive Ridge outlined Monday requires selected international flights that cross into U.S. airspace to carry an armed law enforcement officer aboard. The Homeland Security Department will require such officers on flights where intelligence information leads to a specific concern about that airplane, department spokesman Dennis Murphy said.

"We will then notify the carrier that, based on information we received, we require a law enforcement officer to be on the plane," Murphy said.

For months, U.S. security officials have feared that al Qaeda operatives will again hijack planes to use them as missiles. The most recent concerns center not on domestic passenger flights, but on airliners or cargo planes that take off from overseas and cross over U.S. airspace, either on their way to a U.S. airport or to a foreign one.

The Bush administration raised the terrorism alert level to orange, or high, on Dec. 21 and Air France canceled six flights between Paris and Los Angeles on Wednesday and Thursday, after security discussions between U.S. and French officials.

Ridge said the United States, like any nation, had the right to forbid foreign airlines from entering its air space unless they complied with the new requirements.

"Ultimately, a denial of access is the leverage that you have," Ridge said.

Aviation security experts said the announcement marks a significant change in that, up until now, international security guidelines have been voluntary.

"In the past, no country has ever tried to impose on other countries any measures of aviation security," said Rafi Ron, president of New Age Security Solutions, a Washington-based consultancy, and the former security director for the Israeli Airport Authority.

Ron predicted that despite concerns about armed air marshals expressed by British pilots and others, the measure will be enforced without much resistance because of the huge importance of the U.S. market to foreign carriers.

Homeland Security reviews the passenger and crew manifests of all planes bound for U.S. airspace, generally after the plane has taken off, because passenger lists are usually finalized only minutes before the plane taxis from the gate, Murphy said.

Some passenger lists are reviewed beforehand, he said.

Some international airlines said Monday they would cooperate with the new U.S. requirement. Others, including airlines in Canada and Germany, said they already were using armed marshals on some flights.

U.S. officials say they have specific intelligence British-based airlines could be a target, and sky marshals have already been put aboard at least one Virgin Atlantic flight, reports CBS' Martin.

A British Airline pilots association, however, expressed concern, saying it believed armed guards on aircraft would do more harm than good.

"Our first concern is having guns on aircraft," one pilot told CBS' Martin. "We do not believe that guns in high pressure cabins are compatible."

KLM Royal Dutch Airlines said Monday that introducing armed marshals on trans-Atlantic flights was among several new security measures it was discussing with the Dutch government.

In Russia, Aeroflot spokeswoman Irina Dananberg said the airline was ready to meet the U.S. request once it was made.

Rex Tillerson, on witness stand, gives insight into time as secretary of state
Thanks for reading CBS NEWS.
Create your free account or log in
for more features.
View CBS News In
CBS News App Open
Chrome Safari Continue
Be the first to know
Get browser notifications for breaking news, live events, and exclusive reporting.