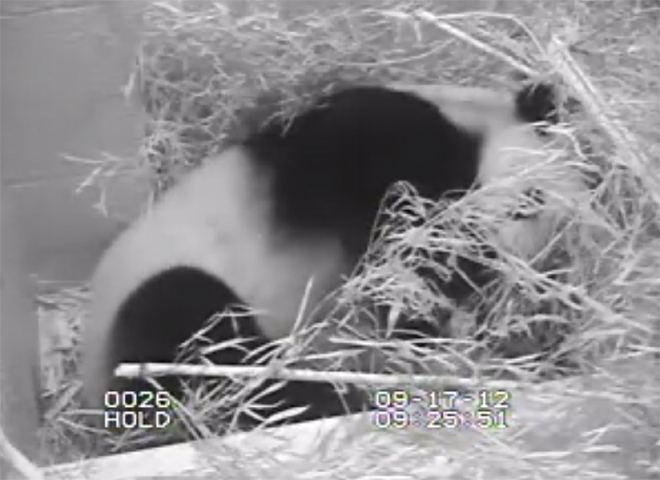 (CBS/AP) WASHINGTON - There was a special arrival last night at the National Zoo: The giant panda Mei Xiang gave birth to a cub.

The baby panda is doing very well. "They have been able to hear it squealing and squawking and all signs of a healthy baby panda," WUSA correspondent Kristin Fisher told "CBS This Morning."

Fisher said news of the birth - which was unexpected - is a very big deal for zoo officials, given that giant pandas in particular are probably some of the worst breeders in the entire animal kingdom.

The panda had five false pregnancies over the past five years, and zoo officials gave her only a 10 percent chance of having a cub, Fisher reported.

Over the last night, since the panda was born at around 10:45 p.m., the panda team had not been able to observe the cub, with the momma panda holding it very close to her body, tucked in her arms.

Monday morning the panda team at the National Zoo said they have finally seen this baby, which is only the size of the palm of your hand

It will be several weeks before scientists with the panda team are allowed inside the panda habitat, hold the panda cub and perform an actual physical exam.

It will be many more months before the public is allowed to visit.

Mei Xiang's first cub, Tai Shan, was born in 2005 and gained a near-rock star following before being returned to China in 2010. Under the Smithsonian's panda loan agreement, any cub born at the zoo must return to China for breeding.

According to the National Zoo more than 300 pandas live in zoos and breeding centers around the world; most are in China.

In July Bai Yun, at the San Diego Zoo, delivered her sixth live cub - weighing about 113 grams at birth, or a quarter-pound. She is the most prolific giant panda in captivity outside of China.