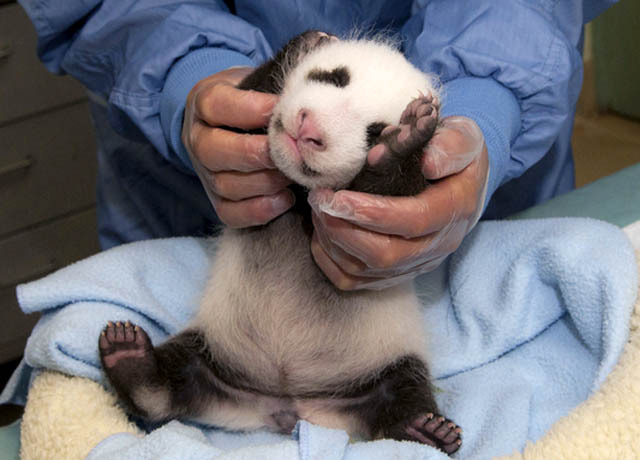 (LiveScience) The San Diego Zoo's latest addition to its giant panda family is a boy. Vets determined the sex of the cub during an exam on Thursday (Sept. 6) and say the 5-week-old baby is healthy.

The cub is 13 inches (33 centimeters) long and 3.2 pounds (1.5 kilograms) -- lighter than his siblings who were born at the zoo in previous years. But the zoo's veterinarian Meg Sutherland-Smith said the baby furball looks healthy and his 12-inch (30-cm) belly indicates he is eating well.

"He looked great," Sutherland-Smith said after the exam in a video from the zoo. "He's a very vital cub, he has a nice full belly ... his hair coat's coming in, his coloration looks great."

The cub also gained a pound since his exam last week and his ear canals are just beginning to open, though his eyes are still shut, the zoo said. [Fun Facts About Giant Pandas]

The baby, born on July 29, will not be named until it is 100 days old, following a Chinese panda-naming tradition. He is the sixth giant panda born at the San Diego Zoo to mother Bai Yun. Four of those offspring were moved to China to join the country's giant panda conservation and breeding program. The previous cub born was a male named Yun Zi, which means "son of cloud." He remains at the zoo and recently celebrated his third birthday.

You can watch the new cub cuddling with his mom on the zoo's PandaCam: http://www.sandiegozoo.org/pandacam/.

Sharing meals in the sharing economy