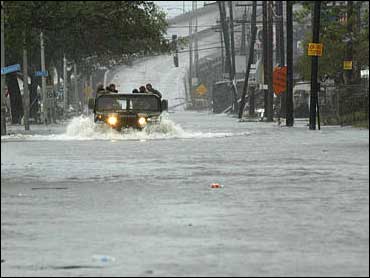 Floodwaters were pooling along areas that were slammed by Hurricane Katrina last month and have been all but abandoned ever since. The water covered piles of rubble and mud-caked cars, rising swiftly to the top of first-floor windows.

CBS News correspondent Sharyn Alfonsi reports that water cascaded out of canals and back onto city streets, covering cars and buckling already battered homes with more than eight feet of water.

With waterfalls as wide as 30 feet, it was difficult to tell if the problem was water flowing over the levees, or

if they had cracked (video).

"It's like looking at a murder," Quentrell Jefferson of the Ninth Ward said Friday as he watched news of the flooding at a church in Lafayette, 125 miles west of New Orleans. "The first time is bad. After that, you numb up."

The lashing rain had stopped by early Saturday, but forecasters cautioned that more could come. Rita made landfall early Saturday as a Category 3 storm just east of Sabine Pass, on the Texas-Louisiana line, more than 275 miles from New Orleans.

Rita landed ashore early Saturday just east of Sabine Pass, Texas. There were fears it would stall, dumping as much as 25 inches of rain.

"We're getting only the fringes, so that's good," said Phil Grigsby, a National Weather Service meteorologist in New Orleans. The wind-driven storm surge was expected to diminish.

An initial surge of water Friday spilled over a patched levee protecting the impoverished Ninth Ward, flooding the neighborhood with at least 6 feet of water. Leaks beneath another levee flooded homes with at least a half-foot of water. Meanwhile, wind-whipped waves pushed water from Lake Pontchartrain over a seawall.

Despite the levee problems, meteorologists were turning their attention west to the communities in the storm's crosshairs such as Lake Charles and Cameron.

"I know we're all concerned about New Orleans, but I'm more focused on these other communities right now," said Max Mayfield, director of the National Hurricane Center in Miami. "That's where people are going to die."

The flooding came as Rita began lashing the Gulf Coast with rain and wind, and up to 500,000 people in southwestern Louisiana headed north. Some who fought hours of gridlock to get out of Texas were frustrated to find they had to keep going to stay out of the storm.

Lake Charles was a virtual ghost town. Before nightfall, squalls were flattening sugar cane fields and knocking over trees near New Iberia, about 110 miles west of New Orleans.

In New Orleans, water poured through gaps in the Industrial Canal levee, which engineers had tried to repair after Katrina's floodwaters left 80 percent of the city under water. The rushing water spilled east into St. Bernard Parish, where ducks swam down Judge Perez Drive.

The storm surge was both stronger and earlier than expected, apparently coming through waterways southeast of the city, said Col. Richard Wagenaar, the Army Corps of Engineers' district chief in New Orleans. Water poured over piles of gravel and sandbags in the damaged Industrial Canal levee despite efforts to build it up.

"We believed the 8-foot elevation was sufficient" to protect the Ninth Ward, Wagenaar said.

Farther north, water 6 to 8 inches deep was streaming into homes south of Lake Pontchartrain, spouting from beneath two gravel-and-rock patches on the London Avenue Canal levee. Corps engineers said they expected the leaks.

"It's a rock levee," said Richard Pinner, who is supervising the levee's repair for the corps.

Officials with the corps said other levees around the city appeared secure. The problems would set back repairs at least three weeks, Wagenaar said, but June is still the target for getting the levees back to pre-Katrina strength.

The water level in Lake Pontchartrain likely will not rise much more but will remain high enough to pose a continued danger to the "flimsy" repairs, said Paul Kemp, a storm-surge expert at Louisiana State University.

"It's going to make it a lot tougher," said Richard Dier, a FEMA group supervisor who oversees hundreds of people searching for bodies. "We'd like to start where we left off, but my men don't submerge or go into houses with deep water."

On Friday, Katrina's death toll stood at 841 in Louisiana and 1,078 across the Gulf Coast.

Mark Madary, a St. Bernard Parish councilman, said houses that were under 12 feet of water after Katrina would probably get an additional 3 feet. He accused the Army Corps of Engineers of not rebuilding the levee properly.

"Everybody's home's been crushed, and let's hope their dreams aren't," he said.