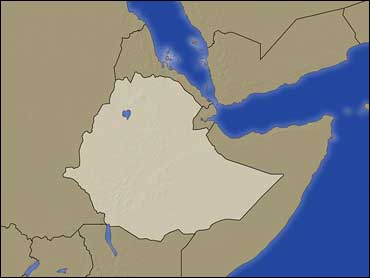 Ethiopian, American and European researchers have observed a fissure in a desert in the remote northeast that could be the "birth of a new ocean basin," scientists said.

Researchers from Britain, France, Italy and the United States have been observing the 37-mile long fissure since it split open in September in the Afar desert and estimate it will take a million years to fully form into an ocean, said Dereje Ayalew, who leads the team of 18 scientists studying the phenomenon.

The fissure, now 13 feet wide, formed in just three weeks after a Sept. 14 earthquake in a barren region called Boina, some 621 miles north east of the capital, Addis Ababa, said Dereje on Friday.

"We believe we have seen the birth of a new ocean basin," said Dereje of Addis Ababa University. "This is unprecedented in scientific history because we usually see the split after it has happened. But here we are watching the phenomenon."

The findings have been presented at a weeklong American Geophysical Union meeting taking place in San Francisco that ends Friday.

"It's amazing," the BBC quoted one of the Afar researchers, Cindy Ebinger of the Royal Holloway University of London, as saying in San Francisco. "It's the first large event we've seen like this in a rift zone since the advent of some of the space-based techniques we're now using, and which give us a resolution and a detail to see what's really going on and how the earth processes work."

The Ethiopian Afar Geophysical Lithospheric Experiment, involving scientists from Royal Holloway and the universities of Leicester, Leeds and Addis Ababa, is using sensitive instruments to study what is happening deep within the earth.

Dereje said that the split is the beginning of a long process, which will eventually lead to Ethiopia's eastern part tearing off from the rest of Africa, a sea forming in the gap. The Afar desert is being torn off the continent by about 0.8 inches each year.

"The crust under Afar is becoming like the crust found in the Red Sea," said Dereje, head of earth science at Addis Ababa University. "Once the crust is formed you will have water because it is a low area and the water will migrate from the Red Sea and the Gulf of Aden. It becomes a basin."

The scientists plan to set up an observatory to watch the split and see how it develops.