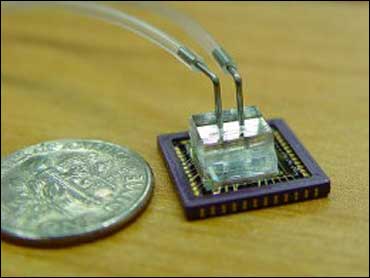 Researchers have come up with a microscopic microscope, tiny enough to fit on a fingertip, that can be cheaply mass-produced and used to scan blood and water for pathogens.

The high-resolution microscope functions without the large and expensive lenses usually associated with such imaging devices. Instead, it combines the chip technology found in digital cameras with "microfluidics," the science of channeling liquid at scales far smaller than a common droplet.

"The whole thing is truly compact -- it could be put in a cell phone -- and it can use just sunlight for illumination, which makes it very appealing for third-world applications," said Changhuei Yang, an assistant professor of electrical engineering and bioengineering at the California Institute of Technology and one of the lead developers of the device.

Yang imagines a range of uses for the so-called optofluidic microscope, which measures about the size of George Washington's nose on a quarter and has the magnifying power of a top-quality optical microscope, according to the Caltech research team.

Health field workers could use it to examine blood samples for malaria and check water for giardia and other parasites. It could be employed on the battlefield. Yang said the microscope could one day even be implanted inside humans to isolate rogue cancer cells circulating in the bloodstream.

"Our research is motivated by the fact that microscopes have been around since the 16th century, and yet their basic design has undergone very little change and has proven prohibitively expensive to miniaturize," said Yang, who is currently in talks with biotech companies about mass-producing the chip, a process he says costs about $10 per microscope.

To make the instrument, engineers placed a layer of metal atop a grid of charge-coupled device (CCD) sensors, the kind of light-sensitive components found in digital cameras. They then punched holes in the metal--each less than one-millionth of a meter in diameter--arranging each opening to correspond with a sensor on the pixel array.

A diagram shows how a fluid sample moves across the microscope's tiny channel.

Gravity or an electric charge carries the liquid sample across a tiny microfluidic channel. As cells or small organisms cross over the diagonally placed holes, the objects block the passage of light from above onto the sensor below. This produces a series of images, consisting of light and shadow, akin to the output of a pinhole camera.

The individual pictures, each capturing a different view of the object, are then pieced together to create a two-dimensional composite image.

Those seeking a more comprehensive explanation of the optofluidic 'scope can visit the online edition of the Proceedings of the National Academy of Sciences, where Yang and his team just published their research. Their work was funded by DARPA's Center for Optofluidic Integration at Caltech, the Wallace Coulter Foundation, the National Science Foundation, and the National Institutes of Health.