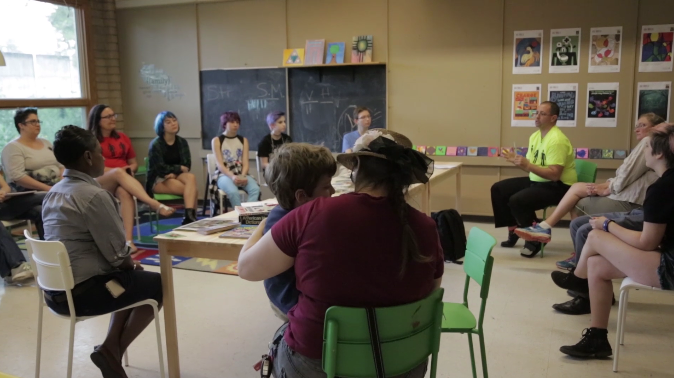 ATLANTA -- Josh Farabee's 14th birthday fell on the same day as his first day at a brand new school. For him it was a double celebration.

"For me, the Pride School is kind of like a safe haven," Farabee told CBS News on a recent sunny afternoon at his home in East Atlanta. "I don't have to worry about what names people may call me or what people would pull in the bathroom. It feels very much like a gift, like finally something amazing in the world."

Pride School Atlanta is the first LGBTQ+ affirming school in the South. Spearheaded by Christian Zsilavets, an openly transgender educator, it will join just a handful of such schools in the U.S. specifically designed as safe spaces for LGBTQ+ youth. It's based on the "Free School" model and Zsilavets told CBS News he's particularly focused on transgender students.

"I firmly believe that bringing trans rights to the forefront -- that we're totally ready for it," said Zsilavets, the director and co-founder of Pride School Atlanta. "Now we can start taking care of our trans youth especially."

"We have created a school where everybody gets to be themselves!" Zsilavetz announced to a classroom-full of incoming students and parents.

Farabee was born as female and named Sabrina. In February 2016, he changed his name and his pronouns after coming out to his parents, mother Stacia and step-father Jason Oberweis. His biological father transitioned from male to female in 2011.

"I don't think gender is finite," said Farabee. "To me it's how I feel most comfortable as."

"The full acronym is LGBTQQIAA," added Farabee. "It stands for lesbian, gay, bisexual, trans, queer, questioning, intersex, ally -- and agender. Or asexual. I think it's like both."

With a multi-colored pixie cut and full face expertly-applied makeup, Farabee's five-foot-one slender frame solidifies an outwardly feminine appearance. He said he often gets called a girl and "she."

"I understand -- I look like a girl," he smiled. "I'm not really trying to "make myself" look like a boy, except for wearing baggy jeans and a binder, sometimes, to flatten my chest."

As yet, there is no data on how many trans students are enrolled in U.S. schools, or the specific risks they may face. According to a June 2016 report by the Williams Institute, about 1.4 million adults in the U.S. identify as transgender -- double a widely-used previous estimate.

"I was bullied in school for a few years," said Farabee. "Most of my friends that are trans or gender fluid have attempted suicide or self-harmed, or have had addiction problems. I have too."

"I'd be walking down the street and I'd hear tranny or fag. I feel like that's just a problem with being bullied and not being accepted," Farabee said.

Of the eight students in attendance on the first day of Pride School, more than half shared a similar experience.

"At my last school I was teased a little bit -- I just went by 'she and her' and 'Maddie' and it was really awkward for me and I didn't like," Jasper, 16 - who asked us not to use his last name - told CBS News. "I dreaded going to school because I didn't wanna be known as somebody who was a stranger to me."

"You don't have to believe anything [your kids] say about their own gender identity, but it doesn't change the fact of what it is," said Zsilavets. "If my kid came and said to me: 'Dad, I know I was born a girl, but I don't really feel like a girl inside.' I don't know what that means (...) I'm not gonna hold that against them."

Demands for equality for transgender people has become one of the newest civil rights movements, building toward the Supreme Court at a fast pace. Trans rights have been in the spotlight since North Carolina Governor Pat McCrory signed into law HB2, a state bill dubbed the "bathroom bill." HB2 requires people to use public bathrooms matching their birth sex. Proponents of HB2 say the law exists to preserve religious freedom, while opponents, including President Obama, say it discriminates against the LGBT community.

"This is about dignity and respect that we accord our fellow citizens," Attorney General Loretta Lynch told reporters in May 2016, as she announced the filing of a civil rights lawsuit in response to the bill. A few days later, President Obama ordered that public schools must comply in allowing transgender people the right to choose a bathroom based on their gender identity. The Obama administration has threatened to withhold federal funding over the issue, but has yet to do so. At least 10 states have responded by filing lawsuits challenging the Obama administration's enforcement of federal civil rights laws to protect transgender students.

"I don't think that a lot of people understand how painful it is for some of these children," said Farabee's mother, Stacia Oberweis. "I feel a lot more at ease now. If the transgender piece is something that was making Josh so uncomfortable and causing problems in Josh's life and now we're able to address it and move forward in this new way, I'm very hopeful that Pride School and the high school years are going to be a lot better."

Asked about whether there was a danger in separating LGBTQ+ youth instead of focusing on increased efforts to make public schools a safer space for them, Zsilavets said there wasn't enough time to wait to "fix every school."

According to surveys, under five percent of the overall U.S. population has self-reported a suicide attempt. That number is as high as 20 percent for lesbian, gay or bisexual respondents. For transgender or gender non-conforming people surveyed, the rate is 41 percent.

"Until every student has permission to be themselves wherever they are, and get an education where they have a full seat at the table, there will be a need for schools like Pride School," said Zsilavetz.

The Supreme Court this week granted an emergency stay to prevent a Virginia transgender high-school student from using the boys' bathroom. The ACLU, which is involved in the case, has argued that the school board's policy violates Title IX, the federal statute that protect students from being excluded from school programs and resources on the basis of sex.

"People often think or feel that sectioning off, or segregating LGBT kids is like coddling them or giving them special treatment," said Reagan Stewart, a transgender parent whose child enrolled in Pride School Atlanta. "My answer is very simple. Yes. We are coddling our kids."

"We have left it up to public school systems and other school systems to work with them -- but [they] have failed. And these kids lives are at stake," said Stewart.

Both Stewart and Zsilavetz, as well as the other parents or students at Pride School, agree that safety, rather than gender, is the central concept behind Pride School.

"I don't see it as sectioning off as much as I see it as giving a safer space for kids that may have a rougher go of it in other environments," said Farabee. "You don't have to be gay or anything to get in. I just feel good that I'm open and I'm out and that everyone I surround myself with is accepting of me."

"I feel good about myself," Farabee added.