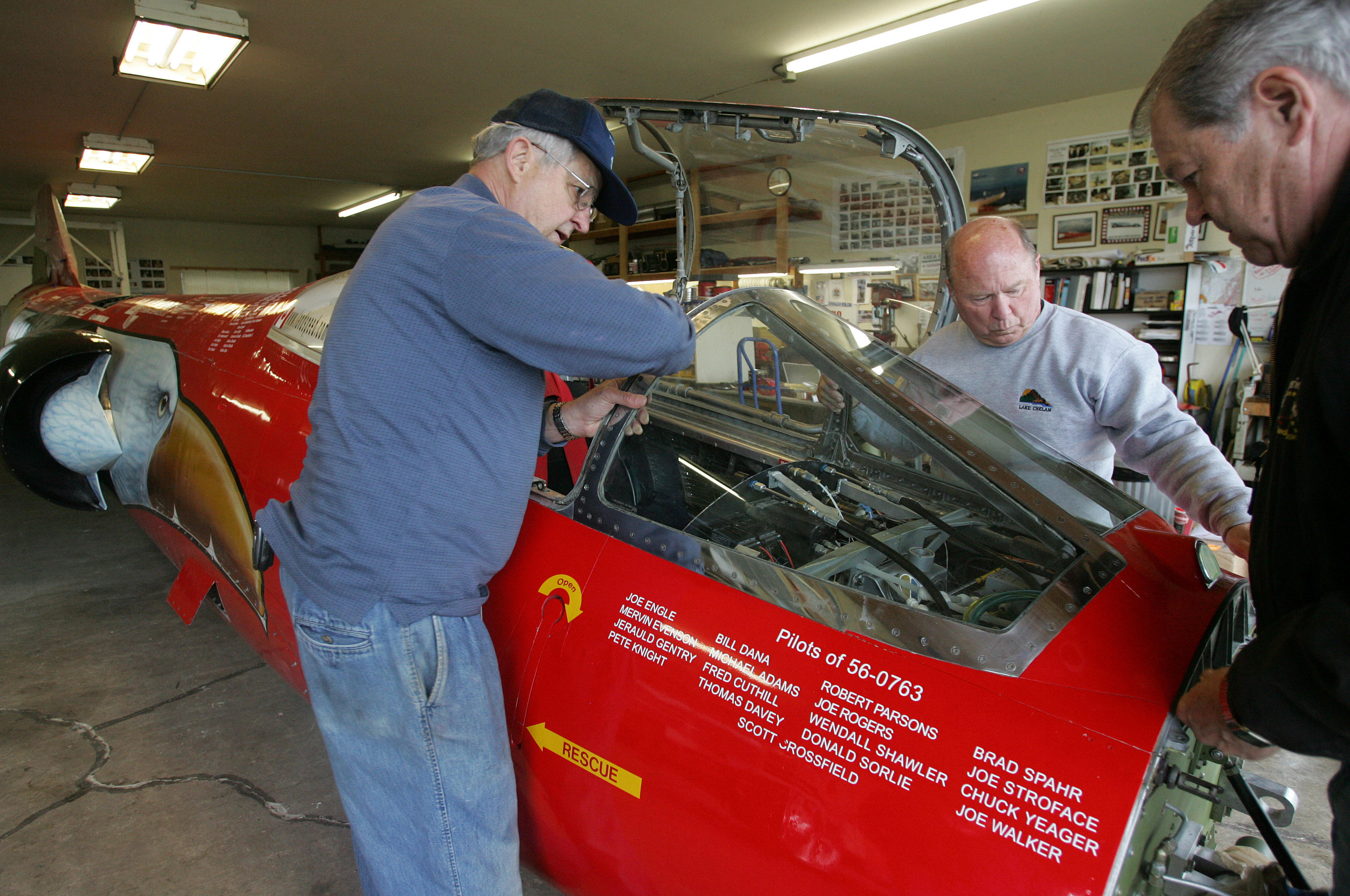 RENO, Nev. -- Ed Shadle's first race was a soapbox derby in Puyallup, Washington, in 1955. Now, more than 60 years later, Shadle, 76, is preparing for what might be the biggest race of his life in Nevada's Diamond Valley.

Shadle's plan is to pilot a jet-powered car across an isolated, desert playa at more than 763 miles per hour.

It would be fast enough to break the world's land-speed record, set 20 years ago on the playa in Nevada's Black Rock desert.

It would mark Shadle's comeback from a lung cancer diagnosis that threatened to put an end to his racing career - and his life.

"I'm not in remission, but it isn't dragging me down," he said.

Shadle said he was diagnosed with stage four cancer in June and has since undergone 33 radiation treatments and 18 chemotherapy sessions.

And he's done so while continuing to manage preparation and logistical planning for the pending speed record attempt.

The preparation and perseverance is expected to pay off later this year when Shadle's North American Eagle team arrives in Nevada. Two other teams, one British and one Australian, also have eyes on the record.

"Technologically it is really challenging," Shadle said. "Most of us gearheads and geeks, that is what gets us off, meeting that challenge."

Shadle, a former IBM engineer who served in the Air Force doing communications and critical maintenance work, is a lifelong racer and tinkerer.

Shadle isn't the only member of the North American Eagle team with big dreams and garage mechanic roots.

The team is composed of nearly 50 members, many of whom are friends and family, who specialize in everything from jet propulsion to parachutes to data collection and management.

Also on the team is Jessi Combs, a professional automotive fabricator and accomplished driver eager to break a record of her own.

Combs, 34, is widely known as an automotive TV personality. She appeared on the Spike TV show Xtreme 4x4 from 2005-09 and has appearances on Mythbusters and other auto and technology-themed shows.

After pursuing a career in snowboarding, Combs shifted gears and took up an automotive career, earning a degree in custom automotive fabrication.

Land-speed racing is a different type of challenge, she said.

"It is the most thrilling thing I've ever done," Combs said. "It is so fast it is slow, it is so loud it is quiet, it is so bumpy it is smooth."

In 2007 Combs survived being crushed underneath a 550-pound, industrial band saw. The accident crushed her L3 vertebrae and left her out of work for five months.

"I'm actually lucky to be walking," she said. "I have a different appreciation for life and my legs and the things I can do."

The goal of reaching 800 miles-per-hour, which is greater than the speed of sound, takes a vehicle that's faster and more powerful than even the fastest race car.

Even something like a beefed-up version of a top fuel drag racer wouldn't work because sending the amount of power it takes to go that fast from an engine through a transmission and to the wheels would tear the vehicle apart.

Instead, the team has installed a General Electric J79 turbojet engine onto the body of a Lockheed F-104 Starfighter, sans wings.

"We needed a platform that was capable of high speeds and aerodynamically very efficient," Shadle said.

Given that Shadle and Combs are attempting land speed records the aircraft hardware is going to rest on a set of wheels specially designed for the task.

Instead of rubber tires on steel rims, the car will ride on solid, aluminum wheels. The special wheels are necessary because the centrifugal force generated from the high speeds would fling rubber tires off the rims. Instead of standard brakes it uses water-cooled, magnetic brakes and a specially designed parachute to stop.

The venue and attempt

When the North American Eagle team lands in Nevada they'll be heading to Diamond Valley near Eureka.

Previous land speed record teams have used the Black Rock desert playa near Gerlach and the North American team has practiced on the dry lake bed in the Alvord Desert in southeastern Oregon.

The driving by Shadle and Combs will be the first time anyone has used Diamond Valley for a land speed record attempt.

They chose the venue in part because it has fewer visitors than the Black Rock playa, which is the site of the annual Burning Man counterculture festival. Burning Man takes up much of the playa for weeks prior to the late August event, which is the prime season for land speed driving.

To count as an official record, the car needs to sustain the speed for a mile over two runs, which are averaged together.

The extra space on the playa provides room to get up to speed before the timed mile and slow down after.

"We could probably set a record still at Alvord desert but there is absolutely no room for error," Combs said.

Shadle and other team members plan to visit the playa to meet with local officials and neighboring ranchers as early as February and return later in the summer for the attempt.

The team has already completed an environmental assessment and received a special recreation permit from the Bureau of Land Management for the attempt.

The record of decision had a finding of no significant impact, which means the BLM thinks the team can make the attempt without hurting the playa.

Not all are onboard

While the BLM has approved of the plan, there has been some opposition.

Photographer Bruce Couch of Bend, Oregon, is a frequent visitor to the Alvord Desert and has accused the North American team of leaving trash and debris on the dry lake bed following runs there.

Shadle said the Alvord incident was a misunderstanding blown out of proportion. He said near the end of their time at Alvord a wind and dust storm kicked up and obscured the playa and mile markers on it.

"The guys went out and searched all over for it in a dust storm, so we had to leave it behind," he said.

In response to Couch's official comments the BLM stated the North American Eagle team has agreed to clear the playa of any debris to, "ensure the pristine nature of the resource."

Having overcome the dispute over litter, Shadle, Combs and the rest of the North American Eagle team are looking forward to their next record attempt.

They're hopeful whatever happens in Diamond Valley it will revive interest in land-speed racing far beyond the Nevada desert.

"We are trying to bring racing and land speed racing back to the public eye," Combs said. "If we could somehow make it sexy again that would be amazing."

An earlier version of this article was written by Benjamin Spillman in the Reno Gazette-Journal.