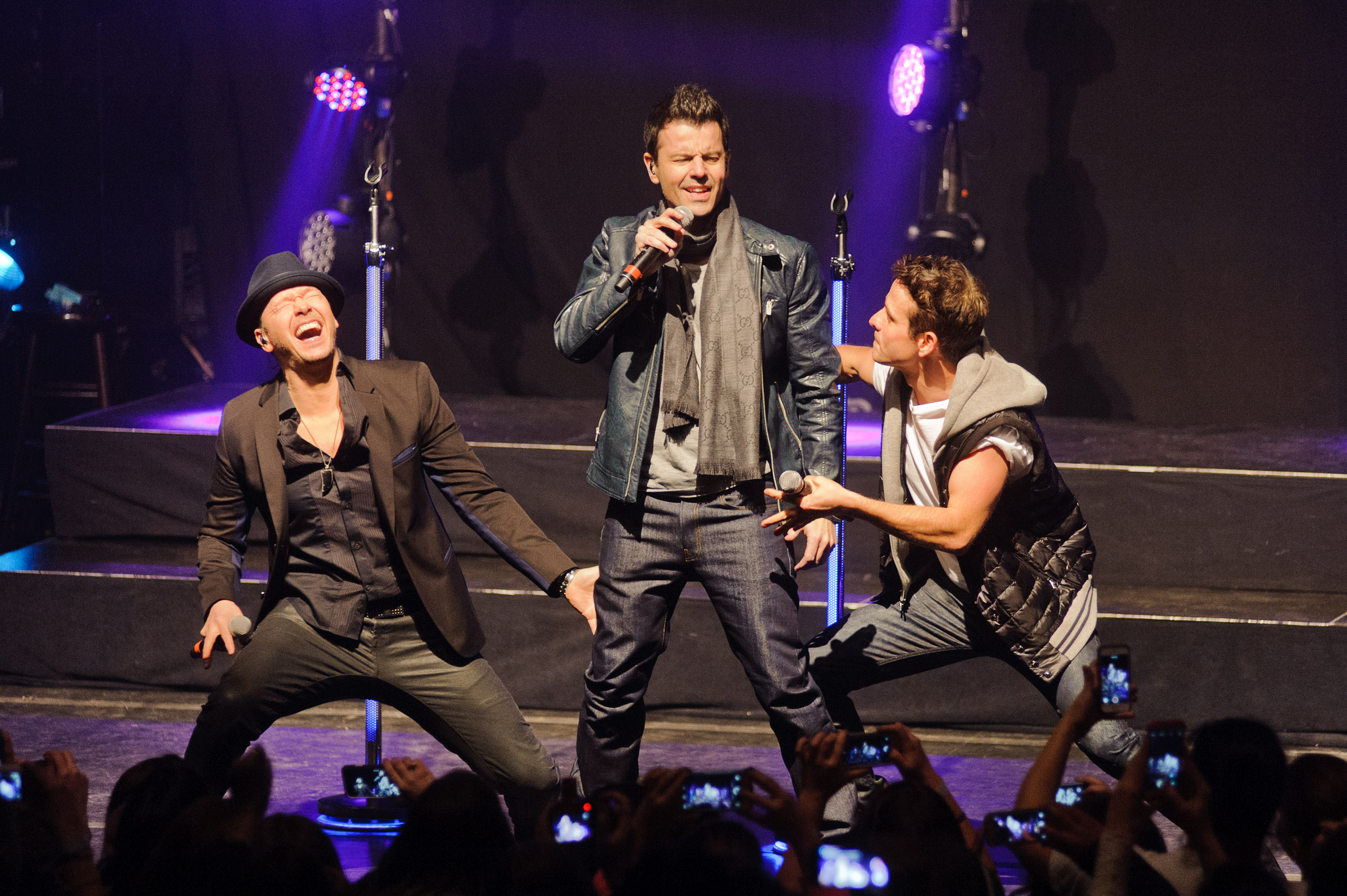 Only a few hundred people could squeeze into the New York's Gramercy Theatre Sunday night for a rare intimate New Kids on the Block show.

The concert, aimed at serving the group's super fans (known as "Blockheads"), found the boy band plowing through classic hits and new tracks -- complete with the signature dances, with the crowd singing along. In between songs, Donnie Wahlberg, Jordan Knight, Joey McIntyre, Danny Wood and Jon Knight took questions and song requests from the crowd.

At one point, a someone shouted for the group's Christmas single, "This One's For the Children."

Though the song was clearly not on their set list, the New Kids treated the crowd to an a cappella-turned-sing-a-long version of the holiday hit.

By the end of the night, the guys took off into the crowd to perform, shake hands and take selfies with fans.

The music portion, at least, is a little taste of what can be expected when the New Kids kick off this year's arena tour, dubbed the "Main Event," in May.

"We look for ways to mix it up," McIntyre told CBS News. "We want to bring the spirit of that show into the tour. And I think that will happen. I like the fact that as a group we can perform for a small theater like [Gramercy Theatre] or major arenas."

Joining them as openers this summer are TLC and rapper Nelly. The New Kids on the Block performed at a festival with the R&B/pop group TLC a couple of years ago and thought it would be fun to team up someday.

That time is now.

When asked whether there will be any collaborations on the road or in the studio, McIntyre said, "The intention is there. That would be amazing. From the minute they came on the scene, we loved TLC like everybody else. To be on a record with them would be amazing. If Nelly could get on there too I think it would be killer."

The upcoming tour will feature a "360-stage" that will take up a large portion of the arena floor, giving additional fans more a chance to get close to the band.

"Our fans are such a part of the show. We like to get around the whole arena and it suits us," said McIntyre.

Closer to the tour's launch the New Kids will spend two to three weeks in rehearsals.

"We have the staple choreography that we clean up," McIntyre said.

For the upcoming outing, the New Kids teamed with Cottonelle as part of campaign aimed at convincing Americans to leave their underwear behind while they "Go Cottonelle and Go Commando."

"I was very excited when the opportunity came along with Cottonelle -- honestly because I use the product," said Wood. "And I'm a single dad of four kids." So TP is a necessity in his household.

And about that going commando tie-in...

"I think there will more of us onstage going commando than ever...The waistlines may be extra low this tour," joked McIntyre. "There's nothing more rock and roll than going commando."

Commando or not, the guys say that they're all about having a great time.

Formed in 1984, New Kids on the Block became huge sensations with the hits "The Right Stuff," "Hangin' Tough" and "Step by Step." The group split in the mid-90s and didn't officially reunite until 2008. Since then, the guys have yet to slow down -- going on major tours, releasing new music and recently debuting the TV series, "Rock This Boat," which documents the band's cruise with fans.

"We met a long time ago -- 25 some years ago, and there was that huge connection back in the day and then we moved on and they [the fans] grew up and grew out of it. And we had other lives. And then somehow we came back together in 2008," said the 42-year-old McIntyre. "Timing is everything. We were ready to embrace it and look back at it with an open heart and embrace the nostalgia. We also feel young and current now so we get to have fun with that."

McIntyre says they all get along better than they ever have.

"We are benefiting from staying together for so long. A lot of bands don't get to reap the benefits of that - you know, you break up, you move on," he said. "It's not easy. If you're lucky enough to stick around for as long enough as we have you know how to navigate through stuff and keep it simple and enjoy it and be grateful."

And they're grateful for all the fans. It's a mix of age groups, too, they say. The people who grew up with the NKOTB in '80s come out to the show to relive their youth -- and some of them even bring their children.

"I feel like with the fans it's like a getaway for them. They have lives. They have careers. And they're moms. And they can just get with us and have a good time," said McIntyre.

Go here for a list of NKOTB tour dates.