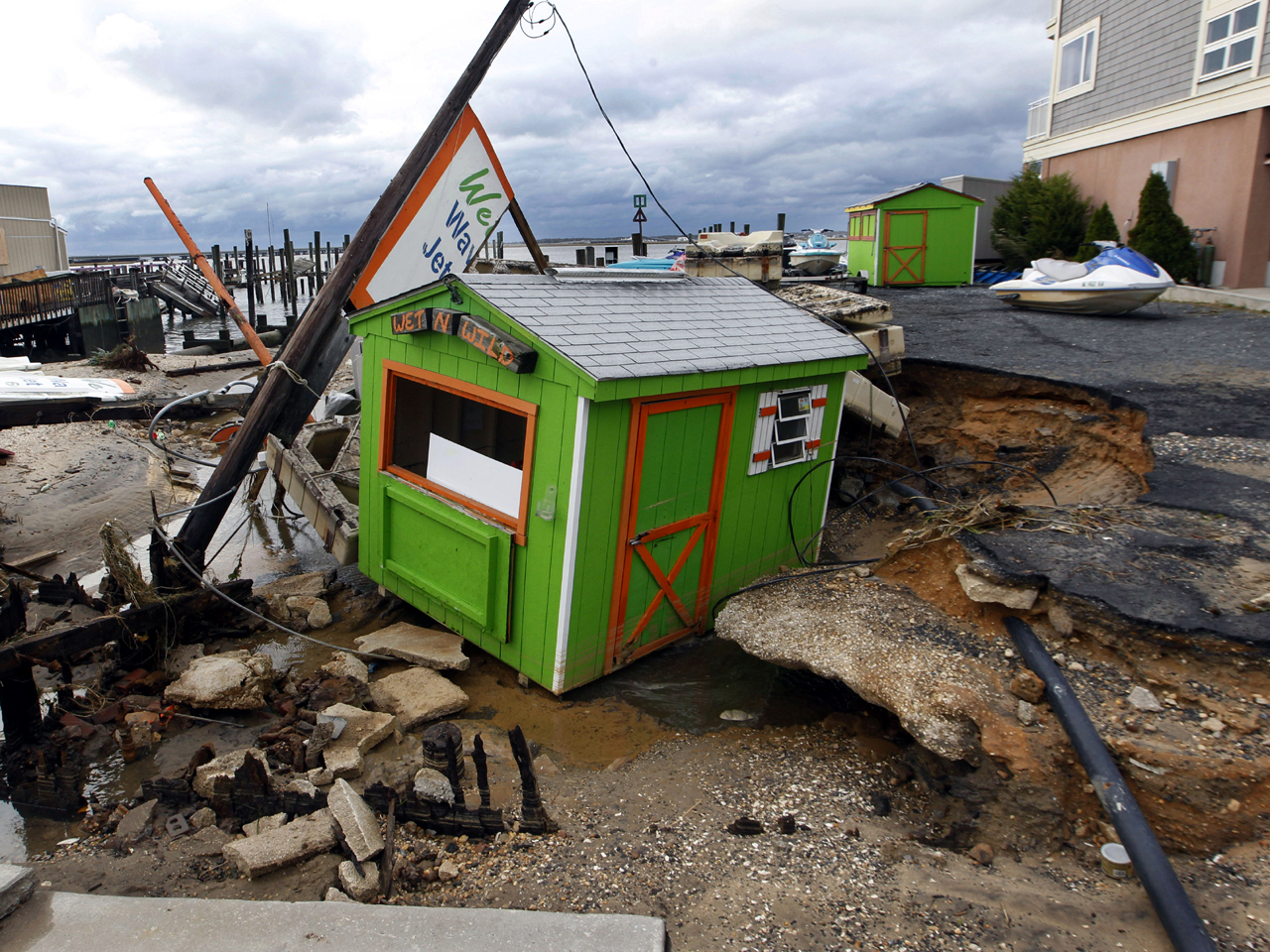 BELMAR, N.J. Even as some barrier islands are mostly cut off and millions in New Jersey are without electricity, Gov. Chris Christie said that the state should start thinking about recovery and rebuilding after hybrid storm Sandy ravaged the shore and did damage in all corners of the state.

"Tomorrow recovery begins. Today was a day of sorrow," Christie said at a news conference Tuesday evening. "There's nothing wrong with that. So long as sorrow doesn't replace resilience, we'll be just fine."

President Obama was planning to visit New Jersey on Wednesday to see the area where the violent storm made landfall two days before.

Christie said Tuesday that when he speaks with Mr. Obama, he plans to ask the president to assign the U.S. Army Corps of Engineers to start working on how to rebuild beaches and find "the best way to rebuild the beach to protect these towns."

While that sounds like a notion that would be hard to disagree with, it can be contentious.

New Jersey's shore has been a political battleground over beach replenishment projects. Some oceanfront homeowners object to building up dunes. Sure, they may protect their properties' integrity, but higher dunes can damage pristine ocean views and the property values that come with them.

And some environmental groups have objected to replenishment plans, too, partly because of fears of contamination in the sand that's being moved around.

New Jersey is still assessing damage from this week's storm.

Sandy has been blamed for at least six deaths across the state plus power outages that at their peak Monday affected 2.7 million residential and commercial customers. The lights were out in Jersey City and most of Newark and in other communities scattered all over the state.

Besides ravaging beaches, the storm swept homes off their foundations in some coastal communities, wrecked some boardwalks and knocked amusement park rides from piers in Seaside Heights.

By Tuesday, access was still restricted onto barrier islands such as Long Beach Island, Ocean City and the one that includes Seaside Heights and Seaside Park.

The New Jersey National Guard came to Hoboken Tuesday night to help residents of the heavily flooded city on the Hudson River.

Mayor Dawn Zimmer told MSNBC that the waters had become contaminated from sewage and had live electrical wires in them.

P.J. Molski, a 25-year-old graphic designer who lives in Hoboken, said that his place is dry but that his car, which he left parked on a flooded street, won't start.

Almost every basement apartment he has seen in the small city is flooded, he told the Associated Press.

"There are just pumps going all over the city of people trying to get the water out of their basement apartments," he said.

Surprise coastal surge floods battered Moonachie, Little Ferry and some other towns along the Hackensack River in Bergen County -- all areas unaccustomed to flooding.

In Moonachie, a town of 2,700 about 10 miles northwest of Manhattan, police Sgt. Tom Schmidt said water rose to 5 feet within 45 minutes, making roads impassable and cutting off residents who thought the worst from the superstorm was over.

Schmidt said rescuers had trouble using boats to carry out rescues because water levels were varying from several feet to only inches. Trucks were also used.

CBS News correspondent Elaine Quijano reports that Moonachie's only firehouse was destroyed. Teams from surrounding towns joined the New Jersey National Guard in the effort to save hundreds of people.

"We can only get so close to the homes, so if we have to get out of the vehicle and assist getting them up, we will," Staff Sgt. Katie Cataldo told Quijano.

Mobile home park resident Juan Allen said that water overflowed a 2-foot-wall along a nearby creek during the tidal surge, filling the area with 2 to 3 feet of water within 15 minutes and eventually as much as 5 feet.

"I saw trees not just knocked down but ripped right out of the ground," he said. "I watched a tree crush a guy's house like a wet sponge."

In neighboring Little Ferry, population 10,000, residents reported water suddenly started gushing out of storm drains late Monday night, and within 90 minutes, 4 feet of water was in the road and entering houses.

Janice Kama was playing cards with her husband by candlelight Monday night after power went out when her poodle terrier mix started looking out the screen door.

"I thought she saw an animal," Kama said. "Then my husband looked out the back door and said, 'Oh, my god.' It was like rapids coming down the block and down the sidewalk, like someone turned on a faucet."

Some public transportation services are starting up again around the state.

Manhattan-bound ferries were to resume running Wednesday morning, as were New Jersey Transit buses in Camden. PATCO trains to Philadelphia resumed service late Tuesday. But other mass transit was suspended until further notice.

Newark Liberty International Airport was to open at 7 a.m. Wednesday but carriers expected to provide only limited service.

State government offices and most schools were closed for Wednesday. Rutgers University called off classes for the rest of the week on its New Brunswick and Newark campuses.

The storm was horrific as it produced hurricane-force winds and heavy rains over the state.

David Anthony and his wife, Ann Felice, both 64, were stuck in their house on Barnegat Bay across from Long Beach Island when water began to rise Monday. They went to their upstairs bedroom and tied five bedsheets together thinking they might need to use them as a rope to escape as the winds and surge pounded the home.

"It was like somebody taking a massive sledgehammer to the wall," Anthony said Tuesday. "I thought we were dead. Even if we did get out the window, the waves were so powerful."

As destructive and frightening as the storm was, the fear gave way to relief after it passed. "We got lucky," Ocean City Mayor Jay Gillian. "It could have been a lot worse but what we got was something I've never seen before in my life."