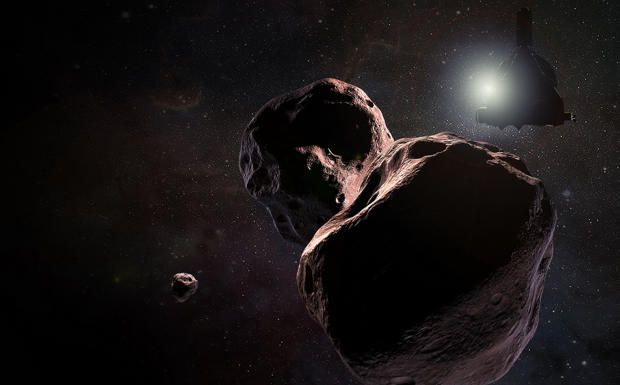 Outbound from Pluto, NASA's New Horizons probe woke up from six months of electronic hibernation Tuesday, phoning home to let flight controllers know it's in good health and on course for a New Year's Day flyby of a remnant of the solar system's birth 4.5 billion years ago.

Mission operations manager Alice Bowman at the Johns Hopkins Applied Physics Laboratory in Laurel, Maryland, said in an interview New Horizons woke up on time late Monday night. But given its 3.8-billion-mile distance from Earth -- a billion miles past Pluto -- radio signals from the spacecraft did not reach flight controllers until 2:12 a.m. EDT Tuesday.

"We were here in the mission operations center, and it was great," she said. "You know, you always plan for success, so when it goes smoothly that's cause for celebration. It was very nice to have everything run so smoothly. We didn't have to do any reboots, any reconfigurations of the ground systems or anything like that. It went very smooth, and we were very happy."

Launched in January 2006, New Horizons accomplished the primary goal of its marathon mission when it flew past Pluto on July 14, 2015, beaming back stunning photos and a treasure trove of data about the enigmatic dwarf planet and its large moon Charon.

Pluto is the most famous denizen of the Kuiper Belt, a vast realm of rocky debris in the hinterland of the solar system that includes an unknown number of dwarf planets and uncounted billions of smaller bodies left over from the formation of the solar system.

One of those bodies, known as 2104 MU69 -- recently nicknamed Ultima Thule -- orbits the sun a billion miles past Pluto but close enough to New Horizons' trajectory for the spacecraft to reach. It was spotted during a search for possible targets by the Hubble Space Telescope.

After beaming back all the data collected during the Pluto encounter, and after a rocket firing to put the craft on course for a close New Year's Day flyby of Ultima Thule, New Horizons was commanded to go to sleep last Dec. 21 to conserve propellant, reduce wear and tear and to give mission planners uninterrupted time to map out the next encounter.

Playing it safe, two flyby scenarios have been developed.

"The primary flyby distance is 3,500 kilometers (2,100 miles)," Bowman said. "If we see something on approach that causes us pause and we want to move farther away, we have an alternate set of commands that will take us to about 10,000 kilometers (6,200 miles) distance. So we have two of those going on."

New Horizons flew past Pluto at a distance of about 7,800 miles. Passing within a scant 2,100 miles of Ultima Thule, the spacecraft's main camera should be able to resolve surface features as small as a basketball despite the dim lighting and the spacecraft's high speed.

At wakeup Tuesday, New Horizons was about 162 million miles from Ultima Thule, closing the distance at about 760,200 miles a day, or 31,600 mph. At its vast distance from Earth, radio signals from the spacecraft, traveling at 186,000 miles per second, take five hours and 40 minutes to reach flight controllers at the Applied Physics Laboratory.

Its current position can be tracked online here.

Over the next two months, Bowman said, New Horizons will keep its main antenna pointed toward Earth, slowly spinning for stability, to maintain uninterrupted communications.

"We can't take any pictures in that state, but it allows us to load software, burn flash, update ephemerides (navigation files), do comm checks with our instruments, basically do all the housekeeping to get ready for the encounter," she said.

On Aug. 13, science operations will commence and New Horizons will resume actively navigating toward Ultima Thule. The nine-day flyby sequence will begin Christmas Day with close approach on Jan. 1.

There are no known targets past Ultima Thule and after stored data from the upcoming encounter is radioed back to Earth, the spacecraft will continue on into interstellar space, leaving the solar system behind.

OK, you've deleted Facebook, but is your data still out there?
William Harwood