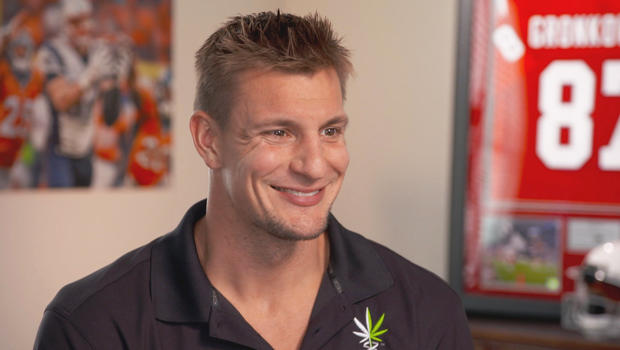 For nine seasons Rob Gronkowski was a huge star for the New England Patriots, catching touchdown passes from Tom Brady. He won three Super Bowls along the way, and at 6'6," more than 260 pounds, his bruising style made him undoubtedly one the best to ever play the game.

So, it's a bit surprising to find him doing an intricate jigsaw puzzle:

"I started off with the borders first," he showed correspondent Reena Ninan. "And then I started going by the colors. Then, when I started getting pieces together, you know, started figuring out strategies, how to go quicker, how to figure it out, it just started clicking.

"It just lowered my stress levels, just the way that, you know, I was feeling. Just always anxious, always going. And I just needed to finally find some downtime to just relax."

Now he has all the downtime he wants — earlier, this year, at just 29, Gronkowski retired, walking away from football to focus on his physical and mental health.

"Before I was just kind of foggy a little bit," he said. "That's when I knew that, you know, football was, you know, doing all that, all the damage. I just knew I had to get away from the game of football and start working on my mental well-being, for sure."

Part of his new life is events like a fitness competition in Tampa, where Ninan met up with Rob, his father Gordon, and his brothers. (Four of the Gronkowski boys played in the NFL, while the oldest, Gordie Jr., played professional baseball.)

The Gronkowskis are very aware of their wild and fun-loving reputation, but Gordie Sr. says that image is only part of the story.

"Yeah, academics was always first," he replied. "I mean, we actually said, 'Hey, you're not going to play in the game if you don't get this done.'"

That discipline translated into success, on and off the field, for all of the boys. Rob has had a hand in countless side ventures, endorsing products, appearing in movies, and there's even a new sports game show on CBS, "Game On!"

His mother, Diane Walters, says that Gronk has always been Gronk. "Like, I had the five of 'em, and he was the character.

"He was always upbeat and positive. I'll tell you, there were so many times that he drove me crazy," she said.

Ninan asked, "What was it like raising five boys who were always into sports?"

"You know, I almost don't remember. It, like, was such a blur!" she laughed. "Yes, we did football, basketball, baseball, hockey, they did golf."

And when all her sons went pro, she watched them on TV, sometimes with a lump in her throat: "And to this day, I still, like, as soon as something happens on TV, I go, 'Oh my gosh, his poor mother,' as soon as I see somebody hurt, because I know I was in the situation over, and over, and over."

Gordie Sr. said, "It was terrible to watch your kid [play], because you focus on your son the whole time. You don't focus on where the ball is; you focus on your son. And then if you see him get hit, and then you're just like, 'Please, get up.' You know, so it's tough. Don't get me cryin'!"

During his years in the NFL, Rob Gronkowski sustained a laundry list of injuries — by his count, 20 or more concussions. So, after yet another injury during the last Super Bowl (which his team won), he walked off the field for good.

"I just wasn't feeling like myself anymore. That's basically the main reason," he said. "The lifestyle all caught up to me, and I was just fighting my way through the last two years. It wasn't enjoyable anymore. So, I just knew that's when it's time to go, and walk away."

Ninan asked, "When you say you felt like you were fighting at it, what was the 'it'? What were you fighting at?"

"Like, my body," Gronkowski said. "My mind, mentally and physically, you know, just fighting every day to get through."

Now his fight is to put his body back together again, from shots of fresh turmeric and ginger, to physical therapy and training, and those jigsaw puzzles, which he says are an important piece of his recovery.  "Just started improving my, you know, problem-solving skills, too, on top of it," he said. "It was crazy. My brain was just clicking. It was just going. It was all on wheels."

The risk of traumatic brain injury that NFL players face is well documented, and Gronkowski is very aware of the realities.

"If you go look at a picture of me literally from seven months ago, my head is, like, swollen," he said. "I was feeling back here, and I had, like, I'm talking, like, liquid just on my brain. You could push it in, it was like pushing, like, a jelly donut in."

"That just freaks me out, hearing you say that?" said Ninan.

"I mean, I'm not, you know, I'm not sitting here saying every day I'm waking up and feeling unbelievable. But I'm saying, like, from where I was, I'm improving a lot every week, and if I stay on the right track, I keep on improving."

Despite the painful cost of playing, he's quick to defend the game of football, though he does have one suggestion to make it safer: have every player sit out one game a year. "Just to give 'em an extra week of recovery," he said. "'Cause it's a vicious game, let me tell you. One extra week of rest is huge!"

As for himself, Rob Gronkowski says he's happy with the changes he's made in his life as he continues to put the pieces back together.

Ninan asked, "What are you proudest of in your road to recovery?"

"Just the steps I make every week," he replied. "Sometimes there's no progress made that week. I'm just keeping on fighting. Just keep on going, keep on doing the right things. Go back out, get myself feeling good again and go back out and enjoy myself."

Sophia Loren on "The Life Ahead"