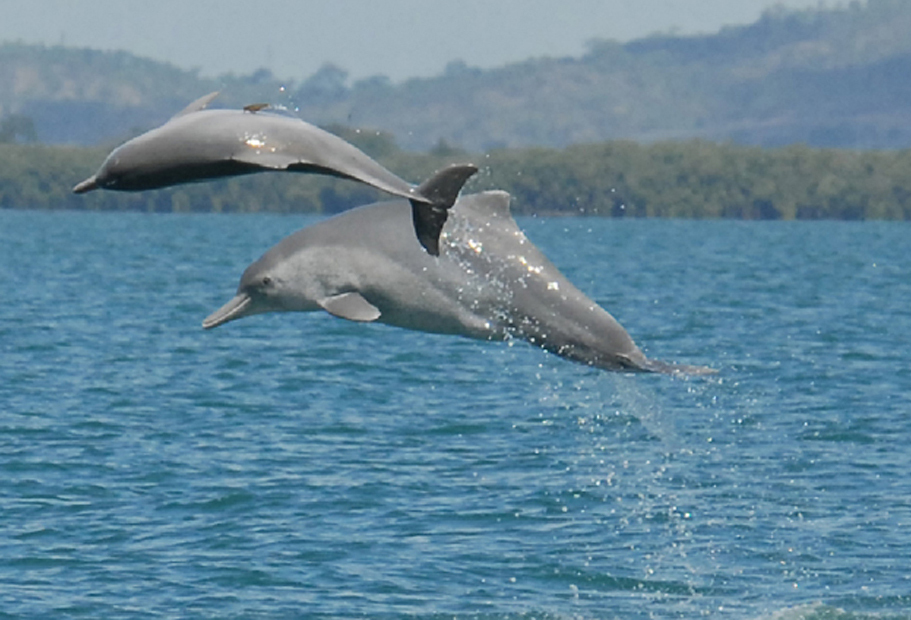 A new species of humpback dolphin has been identified off the northern coast of Australia, researchers have announced.

Humpback dolphins -- named for the hump below their dorsal fin -- swim within river deltas, estuaries and coastal waters throughout the Indian, Pacific and eastern Atlantic oceans. The charismatic mammals can grow to be 8 feet (2.4 meters) long, and sport different combinations of gray, pink and white colorations.

The animal's wide geographic distribution has caused isolated populations to evolve into distinct species that have adapted to their own local habitat types, researchers say. For years, scientists had known of three different species. But now, an international team of researchers based at the American Museum of Natural History and the Wildlife Conservation Society has determined that a population of dolphins off the northern coast of Australia represents a fourth distinct species. [Deep Divers: A Gallery of Dolphins]

"We were surprised," study co-author Martin Mendez, a researcher with the Wildlife Conservation Society and the American Museum of Natural History, told LiveScience. "Morphologically, these guys are not all that different from other dolphin species, but we were surprised to see that the genetic data came out quite different."

To study the animal's evolutionary lineage, the team examined genetic and morphological details from individuals across the entire humpback-dolphin habitat range, including tissue samples from 235 individuals and more than 20 different physical characteristics from 180 skulls.

The researchers say that understanding the habitat range of distinct dolphin populations will improve management efforts to protect the animals. The International Union for Conservation of Nature has listed the Atlantic species, with the scientific name Sousa teuszii, as vulnerable, and the Indo-Pacific species (Sousa chinensis, or the Chinese white dolphin), as near threatened, which is one level better off than vulnerable. Habitat loss and fishing pose the largest threats to the animals.

"New information about distinct species across the entire range of humpback dolphins will increase the number of recognized species, and provides the needed scientific evidence for management decisions aimed at protecting their unique genetic diversity and associated important habitats," study co-author Howard Rosenbaum, a researcher with the Wildlife Conservation Society and the American Museum of Natural History, said in a statement.

The study findings were detailed today (Oct. 29) in the journal Molecular Ecology.